Transition process in Tunisia and the Nahda Movement 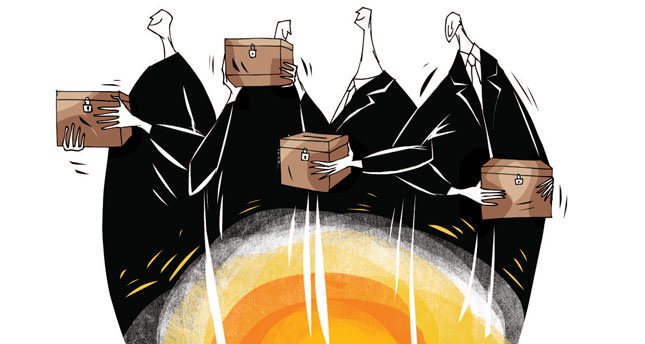 by Nevzat Çiçek Oct 02, 2014 12:00 am
At the end of October Tunisians will go to the polls for parliamentary elections. A month after this democracy test they will go to the polls again but this time to elect a president. Actually, when Tunisians go to the ballot box they will also complete the transition to democracy that started with the Arab Spring. I closely follow the pre-electoral political landscape in Tunisia where the opposition leader was murdered in the wake of the revolution and where Nahda - or Ennahda, the moderate Islamist political party in Tunisia - shared power and made the new constitution. My first impression is that Tunisians are trying to complete their march to democracy after the fall of Zine el-Abidine Ben Ali, and they are very enthusiastic about it. Those who don't want Tunisians to complete this march resort to murky methods to prevent it.

Tunisia deserves special attention since it was the starting point of the Arab Spring and still shows determination to continue it, crowning the revolution with a constitution backed by 94 percent of the population. The developments in neighboring Libya are among the leading factors affecting Tunisia and Tunisian politics.

Tunisians say that their country is the only model to hold up as an example of an East-West mix and they are right in this matter. As Turkey and Tunisia take place among the exemplary models within the context of "Islam and democracy," when we look at the countries in the region, the Tunisian model should be seen as an example that should be supported to counter the rise of radicalism, not only in Tunisia, but also in the region. But neither the Western nor the Islamic world nor Tunisia's opposition sees the sacrifices the Nahda Movement made to complete the transition period safely. Instead, they interpret everything as either good or bad, ignoring Tunisia's gains and the background of the Arab Spring and insist on not recognizing the value of this model.

We must not forget that the real reason for the violence inflicted by movements within the Islamic world like the Islamic State of Iraq and al-Sham (ISIS), al-Qaida, Boko Haram, al-Shabab and Ansar al-Sharia, are dictatorial regimes. With all these movements in the spotlight, post-revolution Tunisia comes in first among the countries that have a regime best suited to the sought-after models. The peaceful, democratic and pluralistic structure of the Nahda Movement and its refraining from seeking revenge makes this model all the more significant. As Rached Ghannouchi, leader of the Nahda Movement and one of the leading thinkers in the Islamic world also said, Islam strives and grows with freedoms. If you destroy freedoms and insist on dictatorial regimes it begets nothing but violence. This understanding and the perception of politics built around it put forth a mentality that serves as a model against radical groups.

An analysis of the Nahda Movement shows that it goes beyond the ordinary with regard to Tunisia's democratization and putting political views into action. So much so that constitutional prohibition of polygamy and the fact that 45 of Nahda's 89 deputies in parliament are women are both unusual things. That one of the leading vice presidents of the Nahda Movement is a woman actually presents us with the fact that the movement outdoes many European countries in terms of women's participation in politics.

When we look at the fears created from Islamophobia after Nahda's coming to power and the efforts toward stoking social tension later on, we see that the issue is essentially about a new design composed of artificial fears produced by members of the old regime who don't want to lose their privileges. In order to intensify this fear among the people, mosques, madrasas (theological schools) and foundations, which had not been a matter of debate in the past, were turned into a contentious issue. To press Nahda and conduct perception management, these institutions had been brought into question with reference to Nahda and in this regard the movement was accused. Over 800 religious shrines had been attacked and not a single perpetrator was caught. Similarly, some mosques had been handed over to radical clerics who were not accepted by the people, but Nahda defeated that plot in a short time by appointing official clerics to these mosques.

Moreover, Al-Zaytuna Mosque - one of the most esteemed institutions in the country - and the imam of the mosque, Shaykh Houcine Labidi, began to be targeted through the media. In the first week of September, Shaykh Labidi walked to the rostrum and said in tears that he was opposed to politics meddling in autonomous institutions and that they could stand on their own two feet at that point.

After the murder of the opposition leader, Nahda was accused on ethical grounds. The Nahda-led government has suffered a lot from this assassination. The biggest criticism against Nahda was that it was late in including Ansar al-Sharia, one of the perpetrators of the murder, onto the list of terrorist groups. Nahda officials emphasize that the reason for the delay was their efforts toward a peaceful resolution of the issue and that radicals target them first due to these tensions.

Indeed, there is a serious perception management operation being carried out through the media. Although Nahda made a sacrifice by creating a new constitution and sharing power, all failures of the ensuing coalition government are still ascribed to Nahda. Nahda has neither closed down a newspaper nor brought lawsuits against journalists so far, though its members have suffered all kinds of insults via media. Nahda doesn't hesitate to clearly express its self-confidence and policies by saying, "You can criticize us in every respect, but interference in private life cannot be accepted."

Another problem arises in relation to the crisis in Libya and the mediation efforts toward defusing it. Nahda has long pointed out that Libya's security is Tunisia's security and has warned the public accordingly. Though Nahda has said on a number of occasions that the terror problem is a national issue and national consensus is required to solve this problem, it went unheeded. Unfortunately, the media has not empathized regarding this matter, either - while refusing to stay away from this perception management operation, despite knowing that it atrophies both the government and politics.

The doings of shadowy organizations made up of groups that took the arms of the close protection officers from the Ben Ali era are unfortunately presented as an alternative and represent the most serious threat to democracy. It is thought that Nahda members, who have languished for years in prisons controlled by those people trying to destabilize Tunisia through shadowy organizations, seek revenge. But there is no sign of such revenge-seeking. Today, the greatest danger to the election appears to be the possibility of these organizations committing political murders and stoking unrest to sabotage the transition process. However, Tunisian society's aversion to bloodshed, its intellectual depth and sense of solidarity constitute the biggest obstacle to this plan.

One of the most serious critiques leveled at Nahda by Tunisian society refers to the ongoing activities of the remnants of the old regime. Although the privileges of Ben Ali's henchmen gradually decreased first with the revolution process and then with Nahda's coming to power, Tunisians resent the fact that these men still survive since there had not been a judicial process and showdown. Nahda officials said they would never seek revenge against these men who had tortured them during their incarceration and that they should be brought to account before the law, referring to the democratic constitutional state, adding that "Tunisia belongs to all of us. Those making a mistake would be called to account before the law."

Many members of the ruling government of technocrats are still the men of the old regime. Unfortunately, this constitutes the biggest deadlock for the Tunisian democracy. But everyone knows the transition process has not ended yet and normalization cannot be fully ensured.

The chief commercial partner of Tunisia is France with Europe accounting for 80 percent of its foreign trade in total. The EU appears to be both the main trading partner and the closest cultural ally. In addition to being the chief commercial partner France is also the country that interferes in Tunisia's domestic politics most frequently. It must be remembered that Tunisia was a French colony until 1956.

Tunisians will go to the ballot box of their own free will. If the transition process succeeds, they will show the whole world how to undergo a peaceful transformation without shedding blood. Nahda's being a model in this regard is quite important also in terms of serving as a model against radicals. Of course, Nahda is not the only party in Tunisia's democratization process, but it is the most important and organized party. Today, Tunisian politicians should give up the political tactics of the old regime. This is crucial for Tunisia's future. If yesterday's persecuted and exiled people make sacrifices today and value Tunisia's gains above everything else, share power and refrain from revenge, it means Tunisian democracy will begin to thrive. The biggest test before the Tunisian democracy today is to make it through the transition process.

Tunisia and Nahda's experience is the last refuge for people in the Arab world in terms of their belief and confidence in democracy. The answer to the question, "Can Islam coexist with democracy harmoniously?" that both the West and these people are looking for is visible in Turkey and Tunisia. If the West is sincere it will do its best to help this experience become permanent and ensure these countries stay as a model. We should recognize that probably the best model to oppose ISIS today is the Nahda Movement. We need these examples for the peace and happiness of the world more than ever.

I don't have the slightest doubt that Tunisians will complete this march toward democracy and freedom. Because Tunisia is for Tunisians and Tunisians as a nation are living happily and in peace. Tunisian politicians must not try to oust each other for there is enough space for all in the Tunisian parliament.