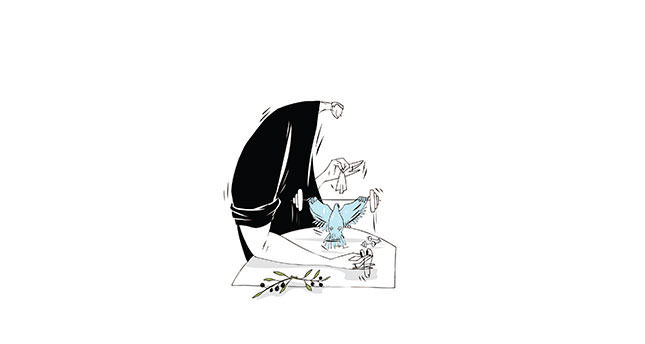 by Kurtuluş Tayiz Oct 04, 2014 12:00 am
The Islamic State of Iraq and al-Sham (ISIS), or Islamic State as it has declared itself, has now turned its attention to Kobani, a city located in northern Syria with a Kurdish majority. ISIS captured Iraq's second largest city, Mosul, with apparent ease and has been threatening both Baghdad and the Kurdish Regional Government's (KRG) capital Irbil. Kobani, home to 400,000, is under the control of the Syrian branch of the PKK, known as the Democratic Union Party (PYD). The PYD's militia, the People's Protection Units (YPG), has been trying to protect the city against the ISIS onslaught and its heavy weaponry (tanks, armored vehicles, shells, etc.) that they captured in Iraq and Syria. If the U.S.-led coalition against ISIS does not intervene swiftly as it did with Irbil then Kobani may fall.

There will be regional and international ramifications if Kobani falls to ISIS. However, such a development will impact Turkey most of all. Not only will control of the Turkish-Syrian border come under ISIS control, but the peace process that Turkey began will be negatively affected. The show of strength demonstrated by ISIS in recent months has focused on Mosul, Irbil and Baghdad. For ISIS militants to have suddenly turned their attention on Kurds in Rojava is a maneuver neither anticipated nor understood by analysts. It is speculated that the U.S. intervention tested ISIS's borders in Iraq, thus forcing ISIS to focus its expansionist strategy within Syria instead. Kobani, by itself, is not a city with strategic importance. However, the city lies close to Cizire, an area of strategic importance due to the presence of rich oilfields. In order to control Cizire, which is currently controlled by the PYD, Kobani first needs to be taken. It is debatable whether or not ISIS has this in mind. While control of Cizire may be the prize of taking Kobani, it is not the aim. The real aim might be different. After capturing Mosul, the terrorist organization's needs grew, and thus to maintain the growth in power, the expansion of borders was required. The EU's Anti-Terrorism Coordinator, Giles De Kerchove, made the following statement at the U.N. Security Council on the issue of "foreign fighters" and the growth of ISIS: "The estimated number of fighters is 31,000. They control a third of Iraq and Syria, as well as water and oil resources. They have developed weapon systems, and their income is between $1 million to $2 million per day."

ISIS, growing at a phenomenal rate, is trying to create an appropriate dress for its bulk. In essence it wants to be a state. The city of Kobani is an "interruption," as the surrounding areas from Raqqa to Azaz are under ISIS control. It is very important for the organization to bind these two areas together. The reason why Kobani is on the firing line is because ISIS wants to legitimize itself by creating territorial integrity across Syria and Iraq. Kurds are the new victims of unbridled ISIS violence. Soon after the revolution started in Syria, the PKK-linked PYD maintained control of the area and set about creating a region of self-governance under the name of Rojava. To date, the PYD has not even shot a single bullet against the Bashar al-Assad regime, while refusing to join the Free Syrian Army created by the Syrian opposition. In Rojava, the PYD has wiped out Kurdish groups sympathetic to KRG President Masoud Barzani and are intent on establishing a small North Korea-like country. However, with ISIS attacks, their dreams are under threat. They are alone in the face of ISIS danger, as the Syrian opposition and Barzani are both distant. The PYD's military consists of light weaponry and a few thousand poorly trained men. It appears they will have a hard time withstanding ISIS, which has heavy weaponry and experienced officers from Saddam Hussein's army within its ranks and fights like a professional army. Just as in the case of Irbil, without airstrikes, Kobani looks likely to fall into ISIS's hands. Given that the international community has not heeded the pleas of the Syrian opposition these past few years, it is not expected to step in and assist the PYD at this point. Similarly, no one is expecting Turkey to attack ISIS to save the PYD. The PKK and PYD are disconnected from the international community, still flirting with Assad and maintaining closer ties with Iran rather than Turkey and Barzani and as a result no one wants them to become powerful in Syria. However, ISIS capturing Kobani and getting one step closer to becoming a state is not desirable for Turkey, Barzani or the anti-ISIS coalition nations either. Due to the offensive ISIS launched over the past 10 days, 150,000 Syrian Kurds have fled to Turkey. Without even considering the political and societal problems this wave of refugees will create, the mere financial cost for Turkey is too great. More importantly, the attempt to resolve the Kurdish issue and disarm the PKK through the peace process will be jeopardized. The Kurdish movement holds Turkey responsible for the ISIS attack on Kobani. They themselves know this claim is baseless, but their aim is to force Turkey to help Rojava. They are expecting Turkey to provide military support and to intervene to stop ISIS. While the Kurdish movement claims that Turkey provides heavy weaponry to ISIS, their motivation in claiming this is to secure weaponry for themselves. If this does not happen they have threatened to resume war within Turkey. Although Turkey has provided aid to the Syrian opposition, for Turkey to provide military aid to the PYD is out of the question. At least with the present conditions, it is not feasible for Turkey to assist the PYD and PKK on its own. The PYD, unlike Barzani, is not a reliable ally for Turkey. To date, the PYD has always maintained a position that negatively impacts Turkey's interests.

Ankara's stance toward ISIS is clear – it acts alongside the rest of the world. By opening its doors to Syrian refugees, Turkey is taking on a responsibility that Western nations are avoiding. Furthermore, the Turkish government has declared that it will be part of the anti-ISIS coalition. An international intervention can render the ISIS campaign in Kobani inconclusive and give the PYD breathing room. If the U.S. feels the need to combat ISIS with a force on the ground, this may also negatively affect the PYD. If the PYD were able to integrate into the Free Syrian Army, then the possibility of saving Kobani would be real and they would benefit from international aid. Developments in Rojava will undoubtedly affect the peace process. The PKK and the Peoples' Democratic Party (HDP) have released statements emphasizing that if Kobani falls, the peace process will come to an end. The ISIS offensive on Rojava does put pressure on Turkey's peace process. The jailed PKK leader Abdullah Öcalan, who is in the position of being "chief negotiator" for the organization, is very disturbed by recent developments. He is trying to analyze the U.S. and Turkey's stances on the matter. The delay in the expected road map for the peace process the government was due to reveal this month is making Öcalan suspicious. He is unsure if Turkey has really changed its stance or not since the peace process is expected to reach a new phase. If the government decides to pursue the peace process, regardless of the PKK, Öcalan's position will not change and the process will continue. But again it can be said that Turkey is living in precarious times. If ISIS defeats the PYD and PKK in Rojava, Turkey may pay the price through a renewed armed conflict. Therefore, the government must tread carefully and make its determination clear. It is evident in the current situation that the imperative regarding the peace process lies in the hands of the government. Despite provocations from the PKK, the government has remained resolute. The peace process is Turkey's greatest ammunition both domestically and internationally. I do not think the government will give up easily or make miscalculations on an opportunity such as this.

I do not anticipate the PKK leadership in Qandil to repeat the mistakes in Turkey that were made in Syria. It would be suicide to make an enemy out of Turkey. The PKK remains listed as a terrorist organization by Europe and the U.S., however, the peace process presents an opportunity for legitimacy. If the peace process is allowed to go to waste then all their efforts in Turkey and Syria will have been for nothing and they will lose this chance at legitimacy. The most prudent policy to follow is that of closer ties with Turkey. This will benefit both Kurds in Turkey and Kurds in Syria. It would be highly destructive for them to make an enemy out of Turkey.

The ISIS attack on Rojava is a good opportunity for the Kurdish movement to consolidate itself and review and correct its relations with the international community and Turkey. By questioning why they are facing ISIS alone and without allies they can find new friends. A PKK and PYD that has made enemies out of the KRG in Iraq and Turkey may not be able to hold on to control of the semi-autonomous region they have established. The possible fall of Kobani might be a short-term victory for ISIS, but the militants are a target for the U.S. and the West. The PKK and PYD, in good time, should establish relations with the Syrian opposition, resolve problems with Barzani and build closer ties with the West and Turkey for long-lasting success for Kurds. If not all Kurds will be affected, not just the PKK and PYD.