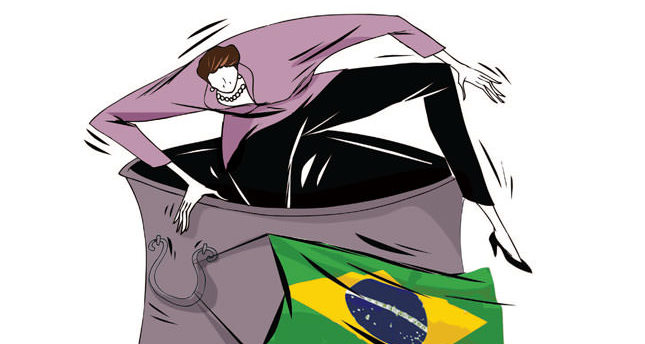 Rousseff has not been a global leader; since she came to power, she has focused solely on Brazil’s internal issues instead of addressing with global ones. In the current climate, Brazil needs a more inspiring leader like Lula to keep bolstering Brazil’s profile among the international community

Millions of Brazilians went to the polls on Oct. 5 to elect the new president of Brazil. There were three frontrunner candidates: Dilma Rousseff, the incumbent and the leader of the Workers' Party; Aecio Neves, leader of Brazilian Social Democracy Party and Marina Silva, former environment minister.

According to the Datafolha's poll, which was conducted on Sept. 17 and Sept. 18, 2014, voter support for Silva was ahead of Rousseff by 46 percent to 44 percent. After a week of aggressive campaigning against Silva, it seemed that Rousseff gained momentum.

According to some commentators although Brazil fell into recession just before the election, Rousseff was doing an amazing job to keep her voters' support over 40 percent. Thanks to the Workers' Party's success to reduce poverty and create jobs over the last 12 years, Rousseff is still the favorite candidate of Brazilian voters. In the election on Oct. 5, Rousseff placed first with 41.6 percent of the vote but could not manage to secure a majority in order to avoid a run-off. She will run against Aecio Neves of the pro-business Social Democratic Party in the second round on Oct. 26 as no one got more than 50 percent in the first round. A recent poll shows that Rousseff may win the second round against Neves by 48 percent to 42 percent. Yet, even if Rousseff remains the favorite, Neves could become the next president if he receives Silva's support.

It is worth mentioning that Neves, a former governor and senator, made a late surge and came in second. Neves had not been given any chance to win the election or to become one of the two candidates who are going to be in the second round. However, while his team was on every corner of the streets, he delivered a strong performance in televised debates.

It was expected that the race would be between Rousseff and Silva. Many of Silva's supporters even believed that fate was clearing the way for her –first, Silva failed to officially register her party and joined the Brazilian Socialist Party (BSP), then a plane crash killed one of the candidates and leader of the BSP, Eduardo Campos and after that Silva emerged as a candidate in his stead. However, unlike Neves, Silva's performance in television debates caused significant erosion to her votes.

Now let's explore the history of Brazil-Turkey relations and the presidential election's potential impact on those relations.

Will Brazil's new leader reach out to Turkey?

Despite having 150 years of history, bilateral relations between both countries have not reached a desired level. Two reasons have played a crucial role in this. The first is the geographic distance and second is that the economy of both countries are not complementary. Although Brazil has the seventh economy in the world with Turkey ranking 16th, both countries' total trade volume is around $2 billion (TL 4.54 billion). It is well-known that while Turkey is dependent on oil imports, Brazil has abundant supplies of oil. Nevertheless, the geographic distance between them and Turkey's presence in the center of an energy corridor make it tough to increase trade volume between the two countries.

Yet both countries have a lot in common. For instance, both are emerging markets and powers (while Brazil is among the BRICS countries – Brazil, Russia, India, China and South Africa – Turkey is among the MINT countries – Mexico, Indonesia, Nigeria and Turkey), both aim to increase their own influence around their respective neighborhoods (in particular during the Luiz Inacio Lula da Silva era in Brazil), both countries want to be global powers, which we saw displayed during the nuclear talks with Iran in 2010 where Brazil and Turkey jointly brokered a deal to swap Iranian uranium stockpiles in May 2010. Iran signed the agreement. However, the U.S. rebuffed the bargain as a sideshow and revealed that it had secured the crucial agreement of all permanent members of the U.N. Security Council and was pressing ahead with new curbs against Iran.

Both of them experienced their golden-age during the former leaders, President Lula in Brazil and Prime Minister Recep Tayyip Erdoğan in Turkey. Lula raised Brazil's profile in the international arena and managed to bring the longest period of economic growth to Brazil while Erdoğan brought stability to the country and during his term Turkey grew strongly. Lula left behind a wealthier and more equal Brazil. During Lula's term, almost 30 million people managed to move up the social ladder. In a similar way, Turkey's economy tripled in size since Erdoğan and the Justice and Development Party (AK Party) came to power in 2002. During his term the staggering annual inflation rate has come down, infrastructure has been improved and living standards have increased.

Bilateral relations flourished with Lula's visit to Turkey in 2009 and after a short time Erdoğan visited Brazil and both sides signed the Turkey-Brazil Action Plan for Strategic Partnership on May 27, 2010. Although Lula was the first Brazilian president to visit Turkey, the first Turkish president to visit Brazil, Süleyman Demirel, went there in 1995. Yet it was the pro-activist foreign policy understanding of the incumbent AK Party that since 2002 increased dialogue between the countries. As a result of this understanding, Brazilian oil company Petrobras collaborated with the Turkish Petroleum Corporation (TPAO) and then the Turkish-Brazilian Business Council was established.

However, unlike Lula, Rousseff has not been a global leader. Since Rousseff came to power she has preferred to focus on Brazil's internal issues instead of dealing with global issues. In the current climate, Brazil needs a more inspiring leader like Lula to keep raising Brazil's profile on the international scene. While we do not know exactly, Neves may fill Lula's shoes, which we have precisely seen Rousseff fail to manage.

If Rousseff wins the race and maintains her post as president of Brazil, she needs to become a global leader and reach out to Turkey to explore the opportunities for both countries to cooperate on global issues. Once both countries shared a common vision about promoting peace on the global stage and considering that Turkey is still dealing with this vision, especially in the Middle East, it would be nice to have a sidekick like Brazil for the future.

Yet, time will tell us the rest of the story.