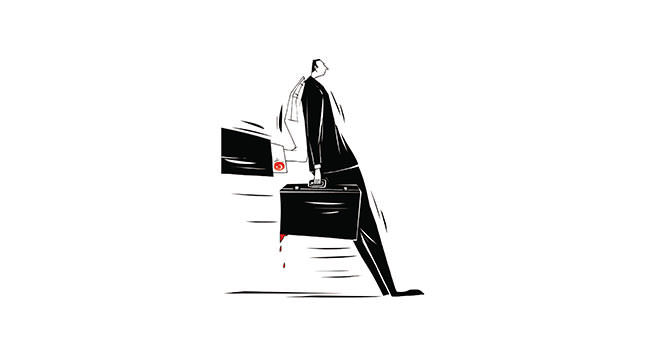 by Erkut Ayvazoğlu Oct 17, 2014 12:00 am
While a human tragedy is currently taking place in Syria and particularly in the besieged Kurdish city of Kobani in Syria's north, Western powers and media outlets, above all Germany, have followed an absurd strategy to portray the crisis as Turkey's own responsibility. German Chancellor Angela Merkel, as the head of one of the most powerful European economies, is not able to initiate efficient steps to end the problem of Islamic State of Iraq and al-Sham (ISIS) terrorism or the Bashar Assad regime. The German government and most of its loyal or close media outlets use a kind of "task imposition" in order to push the Turkish Armed Forces into Syrian territory: "Turkey has to take responsibility and must act against ISIS" is the current call by Western media outlets. However, without any reasonable arguments except the absurd call to support another terrorist organization, the Democratic Union Party (PYD) and PKK, which, on the other hand, may have the potential to attack Turkey at any time. It became obvious that despite some global media outlets there is a dishonest media campaign against Turkey. Those countries complain about Turkey's so-called inaction by disregarding Turkey's incomparable humanitarian efforts while there are no appropriate efforts by any other country, Western or otherwise. Turkey's position, though, seems to be the same as it has been for the last four years with regard to the Syrian civil war and its related human tragedy. Turkey is probably the only Western country that did actually not change its policy against Middle Eastern dictatorships and the biggest host to more than 1.6 million refugees while more than 200,000 civilians have been killed in the last few years in Syria and Iraq and 8 million civilians have had to seek asylum.

Moreover, despite all dishonest media reports, Turkey also offers to send troops to Syria, but only if the U.S.-led coalition against ISIS pledges to bring down the Assad regime after doing away with ISIS. Quite understandably, as it was supported in one of the very few German media reports, on N-TV's website. As noticed, Turkey insists on not being a puppet actor directed by Western powers and interestingly, this key position most likely disturbs Western countries that have even begun to disregard the cruelties of the Assad regime. As the Turkish analyst and columnist İbrahim Kiras pointed out few days ago, the Assad regime becomes increasingly popular in the circles of Turkey's Western allies, which, on the other hand, have tried to push the Turkish Armed Forces into a war against the Assad regime just few years ago in his article "Asıl mesele ne?" (What is the Real Issue) on Oct. 9th, 2014.

Besides unreliable statements and positions on politics, Turkey's position is also shared by many Syrian civilians. For instance, a Syrian novelist and author, Samar Yazbek, is one. The German weekly newspaper ZEIT recently published an interesting interview with Yazbek concerning ISIS terrorism and the current situation of the Assad regime. As an Alawite woman from Syria, Yazbek witnessed the beginning four months of the uprising first-hand and actively participated in a variety of public actions and movements that she immediately wrote as her observations in her diary. These chronicles were later published as a book in 2012, "A Woman in the Crossfire: Diaries of the Syrian Revolution", and attracted many people because of its great importance regarding the initial phase of the Syrian civil war. Yazbek's detailed lyrical narrative regarding the initial days during the resistance against the Assad regime, in particular because of her own role as an Alawite woman, is an unchangeable source to understand the brutality of the uprising from an inside-point of view. That she personally had to struggle against the regime to protect herself and above all, her young daughter, should also be taken into account.

Even though Yazbek's alleged disloyalty to her homeland and particularly to the Alawite community, to which she belongs, has been rumored since the beginning of the uprising, she did not change her position against Assad. Her statements like, "I started to say I was an Alawite and I was with the revolution" were clear at the beginning of the incidents three years ago. In the recent interview, Yazbek emphasized again the fact that both the Assad regime and ISIS are just two sides of the same coin:

"To get rid of ISIS, we have to get rid of Assad as well. It is not possible to defeat one without leaving out the other. [...] Bashar Assad used chemical weapons, destroyed our cities, he is responsible for the death of 500,000 Syrians and he is also responsible for the fact that millions of Syrians are refugees now. However, while he did all these cruelties, he permanently tried to make clear that he is just fighting against jihadists. But in fact, it is Assad who created ISIS and the inaction of the world that has, among other things, caused the emergence of ISIS."

In Yazbek's book it is also fascinating to read how she initially became involved in the uprising. For instance, it seems quite brave of a Syrian woman being able to scream into the faces of the "shabbihas," the professional murderers of the Assad regime, that "anyone who kills his own people is a traitor!" Ironically, later the word "traitor" has become her own continuous reputation within her own Alawite community: "I was a traitor to my sect for being on the side of the demonstrators."

In this sense, by reading the uprising's development through the eyes of an Alawite woman who supported the demonstrators, one remembers few unbiased statements and assessments that the Syrian dictatorship is actually not Alawite, though, a dictatorial regime consisting of certain Alawite tribes in the circle of the Alawite Assad family. Thus, Yazbek tries to confirm this statement in her book by describing the Alawite population in villages around Baniyas as very poor and also as a population suffering from the same injustices. Unhappily, because of current global media and the dominance of certain Alawite groups that are ultra-loyal to the Assad family, this fundamental point could not be shared in depth with the majority of the representatives of both sides of the war.

Regarding her portrayal, one notices a more self-confident woman at the beginning of the uprising who explains her task as a journalist to write as deliverance or an exclamation. In addition, these chronicles served during a certain phase also as evidence that challenged, for instance, the biased reports on state televisions.

However, there are certain moments when she was really desperate, helpless and even just alone, which in her recent ZEIT interview becomes evident again. It is striking that she often repeated her feelings of impending death by writing the chronicles, that everything that was happening in Syria was against her and her feelings as a mother, which made things more difficult for an activist: "The one feeling that made me cry bitterly that evening was loneliness [...] I truly understood how a person can be utterly alone. [...] Truly, I was a dead woman." Sentences like that most likely summarize a whole nation's feelings. Approximately two years later, it seems that despite the additional ISIS threat to her nation and for the whole region, nothing has changed for her as she explained in the above mentioned interview: "Honestly, I lost my hope. I think we are facing a long war. On the one hand, I always tell myself that I must not lose hope, but on the other hand, I do actually not have any hope anymore. Even if Bashar Assad and ISIS would disappeare, we would need many years to recover our nation from all the violence and to build up a new Syria. The extent of the destruction, the rift that goes through Syrian society, is incredible. But the world does not care. I am sorry to have to say this."

That the conditions changed immediately subsequently to the onset of the uprising and that Yazbek could not find an answer to the question of how the murderers could emerge from nothing is a fundamental detail that summarizes the successful state apparatus of the Assad regime. Moreover, these statements in her book explain the whole region's current disastrous mental situation caused by a secular-nationalist state apparatus that was able to veil dissent, which then, however, became apparent with the uprising and the consequential aggressive murderous reactions by the regime.

Today, the global community and, in particular, the powerful Western world have to choose a more promising way and not just temporary moves in order to fight terrorism - against both ISIS and Assad's state terrorism. By this, even Syrian civilians such as Yazbek, who portrayed herself as a kind of inside chronicler during the initial incidents, and who is also actively standing against both ISIS and Assad, despite her alienation from her own Alawtie sect and all the threats she suffered, may be a human example of an irresponsible global community. Under the current chaotic circumstances it seems that the Syrian people have nothing more to lose as Yazbek emphasized in her book: "If the price we have to pay on the path of speaking the truth is our lives, it has been preordained and falls within the natural order of a more just human existence. [... ]The notion that the popular protest movement sweeping across Syria has a sectarian character is an utter fabrication. [...] But we have nothing to lose except our lives!"