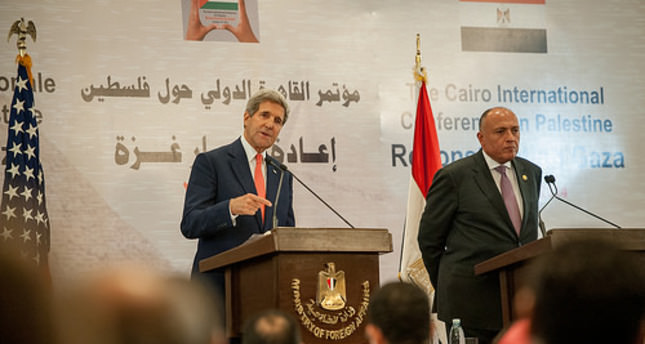 by Ahmad El Nashar Oct 18, 2014 12:00 am
Turkish Foreign Minister Mevlüt Çavuşoğlu described the Egyptian Foreign Ministry's behavior in a recent event that took place during the U.N. General Assembly meeting in the following way "We do not find this attitude professional." Çavuşoğlu's description is a huge understatement and had he not been a leading Turkish statesman I am sure he would have more to say. Ever since the coup on July 3, the performance and behavior of the Egyptian Foreign Ministry has been an embarrassment to the Egyptian nation. In fact, Egyptian foreign policy as a whole has led to a significant undermining of Egypt's positioning in the regional and international arena. In one year, the Egyptian foreign policy practiced by the new government that emerged out of the coup, managed to transform Egypt's role from a regional power to a mere puppet in the hands of regional and international powers. Some might even argue whether or not Egypt really has a foreign policy.

A few examples of the childish public statements made by the Egyptian President Abdel-Fattah el-Sissi during his recent visit to New York include: "During lunch, the emir of Qatar came to shake hands with me," and, "When I meet Obama I will tell him to be nice and I will be nice." These childish statements exemplify the kindergarten approach of the Egyptian Foreign Ministry's policies that have been in use for this past year. Instead of offering content with serious substance, Egyptian foreign policy has been dominated by issuing statements in street talk standards, either by the foreign minister, his spokesman or Sissi. To make matters even worse, the United Arab Emirates decided to chip in to this mediocre performance by issuing a statement that the least to say has no diplomatic significance. This comes as no surprise since dictatorships often exhibit similar symptoms where state behavior primarily depends on the whims and capabilities of the tyrant, which in Sissi's case are characterized by shallowness and a significant lack of understanding of state leadership.

For the past year, Sissi and his gang have come under constant attack by various state leaders and international organizations that are simply calling a spade a spade. When the army is sent to the streets, a speech is made by the defense minister ousting a democratically elected president and thousands of peaceful protestors are killed, the only term present in any political and diplomatic dictionary used to describe such events is a military coup. That is what President Recep Tayyip Erdoğan, the emir of Qatar, Human Rights Watch and numerous other respectable figures and organizations have been saying loud and clear since July 2013. It is the embarrassing truth that Sissi and his Foreign Ministry have been unable to avoid or explain in any logical, professional or even mature manner.

Having mentioned this, it is not Sissi and his gang that are only to be blamed. The so-called Egyptian revolutionaries deal with these shameful incidents by exchanging jokes among themselves or appearing on TV to make fun of the coup leaders and their actions. These are behaviors that demonstrate the same lack of maturity and shallowness demonstrated by those they oppose. In comparing both sides of this struggle many Egyptians get the sense that both sides lack the ability to deservedly lead the country. This miserable performance in the context of Egyptian foreign policy is among numerous other aspects of the state that are experiencing similar failures. The question remains: what will it take to rally Egyptians once more to remove this corrupt regime and rebuild the country to become the proud leading nation it once was?