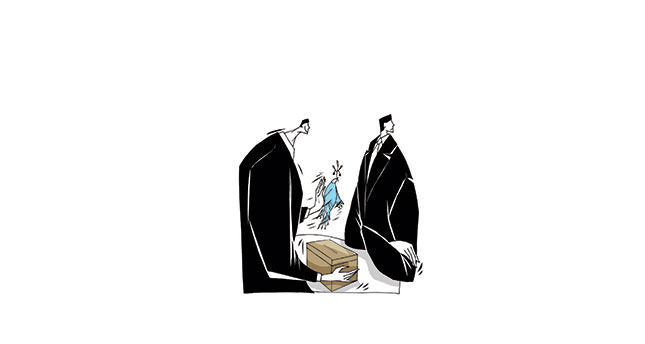 Greek Cypriots rejected the Annan Plan’s 2004 referendums to which Turkish Cypriots had agreed, and recently, it was again the Greek Cypriot administration that left the negotiating table. The international community should now clearly see which side is not eager to find a solution on the island

Nine months after the Cyprus peace talks resumed following a two-year pause, the negotiations once again appear as if they have come to nothing, and thus we have the continuation of the 40-year "Cyprus Problem." Again, it has been the Greek Cypriot administration to be the side to leave the negotiation table, and of course the Turkish Cypriot side is more than happy to turn to the international community and say, "Look, you see, I want peace but my counterpart doesn't."

Of course, we all know the official story. Turkish Cypriots were ousted from parliament within three years after signing the 1960 Cyprus constitution, sidelined after Greek Cypriots decided that they didn't want to afford them the rights that were stipulated in the agreements. Greece, meanwhile, was supporting the far-right Greek Cypriot EOKA militia in a bid to oust the Cypriot government and pave the way for the island to join a greater Hellenic Empire. When this finally materialized in July 1974, Turkey was forced to conduct a military intervention to safeguard its interests on the island - namely, its proxy, the Turkish Cypriots.

Even after the intervention, Turkish Cypriots persisted in trading with the world via the port in Famagusta while efforts to revive the seemingly dead 1960 constitution continued behind the scenes for a further nine years. However, after losing hope of ever reviving the constitution, the establishment of the independent Turkish Republic of Northern Cyprus (KKTC) was announced in 1983. Ironically, the KKTC didn't seek any recognition outside of Turkey and Turkey didn't seek any recognition for the KKTC.

However, in a reunification referendum that was conducted on both sides of the island in 2004, 64.9 percent of Turkish Cypriots voted to reunite the island (with an 87 percent turnout). In contrast, 75.8 percent of Greek Cypriots voted against the plan (with an 88 percent turnout). As a result, the EU accepted Cyprus into the bloc while the island's problem remained unresolved. Yes, this was a blunder on the EU's part, but Turkey refrained from turning it into an issue. In the eyes of the international community, Turkey was no longer just occupying a remote island in the eastern Mediterranean, but it was now fundamentally occupying a part of the EU itself. Turkey should have foreseen this outcome and immediately put the island under a blockade, keeping the EU out until the problem was resolved. Instead, Turkey did nothing, and today it faces mounting pressure from the West to withdraw from the island.

However, in recent years, Turkey's policy on Cyprus has finally started showing some kind of consistency. By supporting the Annan Plan, Turkey and the Turkish Cypriots gained a small victory. Despite the plan failing due to the majority of Greek Cypriots rejecting the plan, the continuation of talks were restructured to cater for an agreement based on the principle of forming a bi-zonal, bi-communal federation with the backing of the United Nations. This new plan seems to be the only one that has a chance of working. All that would need to be agreed on is the giving and taking of land to compensate the Turkish Cypriots and Greek Cypriots who lost their lands in 1974. The only problem is many Greek Cypriots do not want any land besides that which they left behind in the north, and will only elect or support their leaders based on their desire to return it. For this reason, Greek Cypriot President Nicos Anastasiades has been swerving away from the bi-zonal, bi-communal talks in an attempt to steer the negotiations back to the failed 1960 constitution.

If the Greek Cypriots wanted to go back to 1960, when no north-south divide existed, perhaps it would have been wiser for them to have voted in favor of reunification. By voting against it, they ultimately voted against claiming their rights in the north. This mirrors the same mistake made by the Turkish Cypriots when they declared the independence of the KKTC in 1983, indicating that they were no longer interested in their rights in the south.

However, since a vast quantity of natural gas was discovered in the island's southern waters, the Turkish Cypriots realized the danger in forgoing their rights in the south. By letting the Greek Cypriot administration sign deals with international firms over the exploitation of gas fields, the Turkish Cypriots would ultimately be allowing the Greek Cypriots to become wealthy at their expense. The Greek Cypriots would then no doubt express an intention to share these benefits with all of the citizens of Cyprus, whilst claiming that the Turkish "occupation" in the north prevents them from doing so.

Turkey has therefore been putting pressure on the Greek Cypriot administration to avoid making deals with international firms until the Cyprus Problem has been solved. The Greek Cypriots have ignored these calls, prompting Turkey to search for gas in the northern waters. Calling such moves illegal, the Greek Cypriot administration expressed its displeasure at this development as it still views the area as its sovereign territory. However, from a Turkish point of view, those waters belong to the KKTC and Turkish Cypriots have the right to explore wherever and with whomever they please.

In the latest case on the other hand, which has caused the talks to veer off-track, Turkish seismic vessels began to explore for gas in Block 9 in the waters off the southern coast of the island, which had already been leased by the Greek Cypriots to joint Italian-South Korean firm Eni-Kogas. The question now is what business did Turkish vessels have there? Well, although the area is outside what would be considered KKTC waters, Turkish Cypriots, as citizens of Cyprus, have just as much right to the gas reserves in the south as Greek Cypriots do. The same way Greek Cypriots have agreed with Italian, South Korean, American and French firms, the Turkish Cypriots have, according to Turkey, the right to agree with Turkish firms. This was a political move to increase pressure on the Greek Cypriots to agree to the U.N.-backed bi-zonal, bi-communal plan before exploration can continue.

Instead, it achieved the opposite effect, with the Greek Cypriots suspending talks. Yet again, the Turkish Cypriots are able to gloat to the international community that they are the only side truly interested in achieving peace in Cyprus. By leaving the negotiation table, the Greek Cypriots have shown that they're neither interested in a bi-zonal, bi-communal deal nor a return to 1960, but in actual fact want to return to 1963 when the Turkish Cypriots were banished from the political system and forced to live as a feeble minority on a Greek-dominated island.

Perhaps the Greek Cypriots were looking forward to the material wealth that would come about from the reserves off their shores while the Turkish Cypriots remained relatively poor in their isolated enclave in the north. Certainly, the suspension of the talks on the part of the Greek Cypriots can be interpreted once again as an indication that they are not yet ready to agree to terms with their northern counterparts. Rather, they want to force them to surrender. This, however, is unlikely to happen. For the first time Turkey has the upper-hand in the peace process. After all, the only reasonable option to export Cypriot gas to Europe - which is currently looking for an alternative to Russian gas - would be via pipelines through Turkey.

Due to the earthquake-prone region of the Aegean, pipelines to Greece are unrealistic. Another option that is being considered is the building of a Liquefied Natural Gas (LNG) plant in Cyprus that could liquefy the gas to be shipped to the European market. However, the gas discovered so far is insufficient to fund an LNG plant. Even if established, it would probably struggle to offer competitive prices to Europe's main LNG importers Spain and France, who import the majority of their LNG from Algeria.

Having recently signed a 30-year deal with Israel, Jordan should have its demand for natural gas met already. Israel likewise is able to supply its own demand for both natural gas and LNG from their own reserves. Lebanon as an exporter of natural gas has no need, and the crisis in Syria makes it a no-go area. The island's southern neighbor Egypt, which until recently was also an exporter of natural gas, has an LNG plant, but due to the absence of a re-gasification plant, it cannot supply its own demand. Pipelines to Egypt are also practically impossible.

Therefore, Turkey is able to play its card as a much-needed energy hub to entice Europe to pressure the Greek Cypriots into accepting Turkey's demands. Unfortunately for the Greeks, the "innocent Christian victim" card will not prove successful with Europe this time. All that is required of Turkey is to ensure it maintains stability in Anatolia in order to prove itself as a reliable avenue for gas imports from the eastern Mediterranean to Europe.

Where do we go from here? Perhaps the easiest option for everyone would be if the Greek Cypriots apologize and return to the negotiation table, promising to halt exploitation activities until the UN-backed peace plan has been achieved. If not, Turkey and the Turkish Cypriots may look into seeking recognition for the KKTC - a viable option that should be considered by the international community. It's either that, or another four decades of the status quo.