Is the Alevi issue ‘only’ a sect issue? 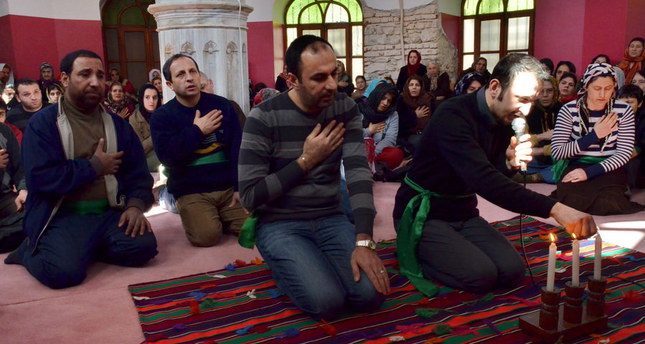 by Filiz Gündüz Nov 04, 2014 12:00 am
Turkey has a diversified society that includes Turks, Kurds, Caucasians, Balkans, non-Muslim Armenians, Greeks and Jews. However, the population of these ethnic and religious groups has been dramatically decreasing since the beginning of the nationalist and secularist policies of Kemalism implementing massacres and pogroms during World War I. As a result, the Muslim community of modern Turkey has been isolated from its Christian and Jewish neighbors and collapsed into its own internal antagonisms such as the one between Alevi and Sunni members. The Alevi community constitutes the vast majority of the Shia sect in Turkey.

For Turkey, the Alevi issue, which extends throughout the whole of Middle Eastern political geography, is not only a domestic issue but also a foreign policy matter. This issue is one of the major problems that the Turkish government has been facing. The Alevi community imposed itself on the present political agenda of Turkey after the Gezi Park protests in 2013 through its mass involvement in the incidents. Although the Justice and Development Party (AK Party) government bridged significant steps regarding the Alevi issue through several meetings such as the "Alevi Opening," the Kemalist elites including academics, journalists, writers and nongovernmental organization representatives claimed that the government had no real agenda in order to solve the Alevi community's problems.

In fact, the AK Party is the first government to officially apologize for the Dersim massacre where Kurdish Alevis were brutally killed by the state. Madımak Hotel was turned into a science and culture center by this AK Party government where 35 people were killed in 1993. Nevşehir University was renamed as "Hacıbektaş" (the name of a famous Alevi mystic). President Recep Tayyip Erdoğan joined several meetings with Alevi community representatives in order to discuss the problems of Alevis. In spite of their efforts, Erdoğan and the AK Party government are considered the worst rulers of the Republic. They are accused of suppressing the Alevi identity and of preventing Alevis from practicing their beliefs. But is that really so?

If there is an ongoing conflict among communities in a nation-state, all representatives of these communities should meet and look for a peace process. During these processes, Alevi delegates and government representatives may sometimes disagree on complicated matters such as determining the political definition of the Alevi identity - is it a sect, religion or a cult?

Nevertheless, the Alevi issue has been used as an ideological weapon against the AK Party government by leftists, Kemalists and nationalists throughout the debates. Opponents insistently ignored the real problems that Alevi individuals face in daily life such as discrimination and/or recognition problems. If Sunni and Alevi communities think that the problem has emerged from differences in their beliefs, they can proceed to follow with a scholarly discussion. However, the conflict is less likely about religious issues although it seems that way. In a crisis such as the Gezi Park protests, the Alevi community can be mobilized constantly with the motivation of pioneers of the "revolution" against Islamists (Sunnis).

I'd like to argue why Alevis are not positioned as opponents to "Islamists" but actually to Sunni people supporting the AK Party for the last 12 years. While proceeding with this point I'd like to avoid the "Alevis are Kemalists, they were suppressed by Kemalist policies mostly but they still stand for the CHP" argument as much as possible. In this scenario Alevis are set to present a progressive, revolutionist, secular and/or Kemalist position contrary to conservative Islamists who represent the backward, regressive, religious, dark and corrupted side of Turkish society. It may be quiet gripping to foreign readers that an identity which takes its base from a sect of a religion can be regarded as a secular entity comparing another community they belong to a different sect. This could be a refreshing place for a Kemalism 101 course to start.

Kemalist ideology, which hoped to create a Turkish and culturally Sunni nation state by burying the Ottoman era, wouldn't miss the chance to have Alevis as an ally, for sure. However, pre-modern Alevis still wouldn't quiet fit Kemalism that set the Turkish symbolic order. In Kemalist symbolic order, the founder of the Republic Mustafa Kemal Atatürk referred to enlightenment, virtue, a bright future, logos, the truth and so forth all the time. In this way, it was the "other" that was cast into an irrational, reactionary and immoral position unconditionally. No need to say that Kurds, Alevis and non-Muslims constitute the other in the Turkish symbolic order however, in the Kemalist social order there are others that happen to be more other than the other. The conservative Muslim other was a concrete other and for that matter Kemalism could pick any marginalized other such as Alevis to marginalize another other. In that sense Alevis became the apparatus to legitimize secular and Jacobin ideology and hence blocking the possibility of an open environment for discussion.

Rather than resolving sect issues by centering only upon the success of an ideological agenda such as the secular-Islamist dichotomy, also excluding Alevis from the debate sphere and disallowing them from participating in subject of discussion is incorrect. There is a space needed where Alevis can state their demands as equal citizens. Non-Alevi Kemalists and leftist actors should step aside a little and let Alevis be the owner of their matter.