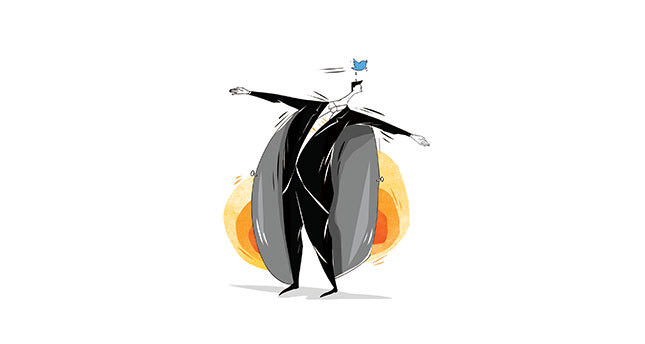 by Aboud Dandachi
Nov 12, 2014 12:00 am
It is impossible to overstate the scale of the refugee crisis created by the collapse of resistance to the Islamic State of Iraq and al-Sham (ISIS) near the border town of Kobani in northern Syria. In just two weeks, over 190,000 refugees flooded into Turkey to escape the ISIS advance in the villages near the town.

The newly displaced refugees had good reason to fear for their lives under the self-styled Islamic State, going by the barbaric precedents set in Raqqa, Mosul and Deir el-Zour. The border between Kobani and Turkey may consist of just a fence, but to tens of thousands of refugees, it was a lifesaving fence. Without a shadow of a doubt, a genocidal massacre was averted in Kobani when Turkey opened its border to the fleeing residents of the area.
It was also an act without which the current U.S.-led coalition air campaign against ISIS in Kobani would have been infinitely more difficult since the airstrikes are all that is preventing the terror group from overrunning the parts of the town it doesn't already control. With the vast bulk of Kobani's populace safe in Turkey, the aircraft attacking ISIS positions have far greater flexibility and freedom to destroy their targets as evidenced by the frankly ludicrous overkill of American planes obliterating the nearby hill of Telsiher just to destroy an ISIS flag that was planted on its summit.

Events in Kobani have proven yet again how invaluable Turkey's role is in alleviating the suffering caused by the conflicts south of its border. In the same week that Turkey let in almost 200,000 new refugees, both Jordan and Lebanon shut their borders to any more displaced people fleeing the conflict in Syria. Apparently, not every country in the region feels obligated to act as the moral-imperative would demand. But even saving the lives of hundreds of thousands of refugees, a move that also facilitated the current air offensive against ISIS, was to many "geopolitical analysts" not an act of sufficient magnanimity in and of itself. A lot of ridiculous opinions have been voiced in the world of punditry regarding expectations of how far Turkey, as a member of NATO, should go in getting into an open conflict with ISIS and forgetting that the current air offensive against ISIS isn't even a NATO operation.

As a Syrian, it has not been lost on me that the same group of people who are presently occupied in bashing Turkey saying, "Arm Kobani! Save Kobani! Cross international boundaries and battle ISIS in Kobani! Open the borders to every Tom, Dick and Harry who wants to fight in Kobani!" is the same group of people who have spent the last three-and-a-half years giving U.S. President Barack Obama every excuse under the sun to back out of confronting the Syrian regime over its murderous suppression of Syrian towns and cities using everything from barrel bombs to Scud missiles and even chemical weapons. There are 1,000 Kobanis littered all over Syria, and if defeating ISIS is indeed so vitally important, Obama has two perfectly usable airborne divisions he can drop into the battle anytime he so chooses.

Any idiot can bomb a hill when they take offense to a flag there, but it takes a remarkably stable society and state to maintain an open door policy toward refugees on the scale created by the Syrian and Iraqi conflicts. The same people fervently tweeting #SaveKobani would be aghast at the thought of their own countries taking in just 1,000 refugees from the town. This winter, it will not be hashtags that will warm and feed the latest victims of the region's wars – it will be the kindness and charity of the societies that took them in.

Even the most clueless and self-serving pundit has to concede at some point that Turkey's help will be indispensable in rolling back ISIS, and Turks understand better than most what that will entail. Obama may be satisfied with a strategy that consists of little more than a couple of dozen airstrikes a day as opposed to the thousand-a-day-sorties of the first Gulf war, but even the most optimistic military analyst will not pretend that it will be enough to seriously reverse ISIS's massive territorial gains. To do so will require a degree of commitment far greater than has hitherto been displayed by many countries both inside and outside the region. Demanding that Turkey go it alone and embark on a course of action that would cause one to recoil in horror at the thought of one's own country undertaking, must certainly count as a new low even by the standards of modern day punditry.

But for now, almost 200,000 refugees from Kobani are safe thanks to a fence put up by a country that is more stable and welcoming than the societies the refugees fled. Two-hundred-thousand souls who otherwise would have been at the mercy of the most vicious terror group the region has ever seen. Someday, most of the world will forget that there was ever a battle for Kobani, but it is far better for the town's name to eventually fade into obscurity than be forever remembered in infamy as the site and location of yet another atrocious massacre. And as a Syrian, I know who to thank for preventing the latter.