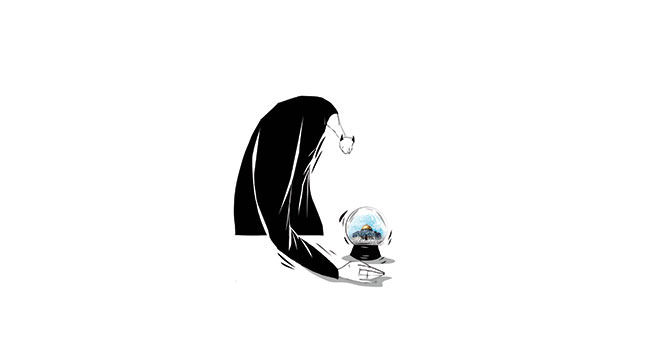 by Sabrien Amrov
Nov 13, 2014 12:00 am
Tensions had been mounting in East Jerusalem between Palestinian residents, Israeli settlers and Israeli security forces long before October. Since January 2014, the Israeli Ministry of Housing and Construction has demolished over 300 houses and recently confiscated over 29 apartments that have been handed down to ultra-conservative Israeli settlers after violently forcing Palestinian families out of their homes in neighborhoods such as Silwan.

At the al-Haram al-Sharif (Noble Sanctuary), also known as the Temple Mount, specifically, Israeli forces raided Al-Aqsa Mosque almost every month since the beginning of the year, blocked worshippers from visiting both the Dome of the Rock and Al-Aqsa Mosque on several occasions including during the holy month of Ramadan. This was done either as a collective punishment or to close off the premise so that ultra-conservative settler groups or members of the Knesset could tour the 35-acre compound. In addition, without international scrutiny, Israel engaged in numerous excavations, digging 20 tunnels around the mosque.

However, the tension climaxed with the announcement of Israel's plan to expand two existing illegal settlements – Har Homa and Ramat Shlomo. Tel Aviv disclosed it will add more than 1,000 housing units for the twin settlements situated in and around East Jerusalem – the part of the city Palestinians demand for their future state. The news sparked international ire, as it followed a previous announcement made in early October of plans to build another 2,610 settler homes at Givat Hamatos, one of the last open hilltops separating Jerusalem from Bethlehem. On Oct. 29, the U.N. Security Council called an emergency session at the request of Palestinian and Jordanian diplomats to tackle the unfortunate news of Israeli intransigent continuation of illegal settlement construction in the occupied Palestinian territories. On Friday, Oct. 30, for the first time since 1967, Al-Aqsa Mosque was closed off to all Palestinians as Israel deployed some 13,000 police across East Jerusalem and vandalized the premises, reminiscent of the attack on the Romanian Orthodox Church this past summer.

Indeed, the "Judaization" of East Jerusalem has long been a strategy for Israeli annexation of Jerusalem by stamping out the identity of Palestinians from the city. Judaization entails the demographic and physical altering of Jerusalem by the Israeli state to transform the space into a quintessential Jewish-Israeli state in character, consolidated by the Israeli government and control. Under international law East Jerusalem is considered occupied territory and is regarded as such by the international community, including the U.N. In other words, building Israeli infrastructure in East Jerusalem or in the West Bank violates Article 49 of the Fourth Geneva Convention, which stipulates, "The Occupying Power shall not deport or transfer parts of its own civilian population into the territory it occupies."

Despite this legal clarity, since 1967 the Knesset, irrespective of which government was in power, has pushed to transform occupied East Jerusalem into a Jewish-Israeli city. In fact, on June 10, 1967, Israel unilaterally declared Jerusalem unified after illegally extending its jurisdiction to the eastern part of the city. It was the only actor at the time and the only actor today to recognize this move, but has worked extensively to implement the fait accompli despite its illegality. This contentious policy enabled violent behaviors by ultra-conservative settlers, the Israeli security forces and Israeli legal institutions that also discriminate against the Palestinian residents of East Jerusalem. With this historical context in mind, these recent developments are in fact, as Israeli anthropologist and activist Jeff Halper explains, "The final phase of the Judaisation."

The recent ransacking of Al-Aqsa Mosque by ultra-conservative settlers and Israeli security forces has also resurfaced the constant abuse and humiliation of Palestinian cultural heritage and religious sites in Jerusalem. Declaring ownership on holy sites is one of the many ways Israel extends its presence in occupied East Jerusalem. While some media outlets such as The New York Times have suggested the ultra-conservative Israeli activists are advocating for only greater access to the Temple Mount, their demands are actually of a much graver nature.

These groups, led by activists such as Yehuda Glich, who escaped a Palestinian assassination attempt, believe that they have the right to remove the Muslim holy site and replace it with a Jewish temple. In fact, these groups, such as the Temple Mount and Land of Israel Faithful Movement, are quite explicit in their intentions. On their website, they clearly state: "Liberating the Temple Mount from Arab (Islamic) occupation. The Dome of the Rock and the Al Aqsa mosque [sic] were placed on this Jewish or biblical holy site as a specific sign of Islamic conquest and domination. The Temple Mount can never be consecrated to the Name of God without removing these pagan shrines. It has been suggested that they be removed, transferred to, and rebuilt at Mecca."

This group has acted on its ambitions, without restraints or warnings from Israeli security forces. For example, on March 12, 2014, Glick, the director of the far-right Temple Institute, entered the Haram al-Sharif compound with two ultra-Orthodox Jewish rabbis under the armed escort of Israeli police. As such, ultra-conservative groups, with the support of the Knesset, are pushing for both more housing for settlers in East Jerusalem and appropriation of Palestinian space in the holy city.

In effect, Israeli ultra-conservative activists and members of the Knesset are appropriating a combination of religious and security discourses to justify their aggression on the Temple Mount specifically and in East Jerusalem more broadly. They have chosen to speak of their claims through the lens of religious warfare. Loyal to Zionist ideology, these groups find legitimacy for their intimidation and bullying of the Palestinian population through their religious claim to the land and their self-proclaimed unique security condition.

For Palestinians, the issue with the systematic and institutional bullying of Palestinians in East Jerusalem is not limited to religious warfare. Rather, it should be observed in the wider context of a military crackdown that has been taking place in the West Bank since the popular unrest that occurred there over the war crimes committed by Israel in Gaza this summer. More broadly, it is part and parcel of the greater policy of the Israeli state's collective punishment of Palestinians. Indeed, the events in Jerusalem must be contextualized in the intensification of Israeli military aggression in the last couple of months in the West Bank and Gaza.

In Gaza, Palestinians are dealing with the aftermath of Israel's massive rebuilding of the city after the belligerent attack this past summer. According to the U.N.'s Office for the Coordination of Humanitarian Affairs, as of Oct. 15, 2014, "… 2,205 Palestinians have been killed, including at least 1,483 civilians, of whom 521 are children and 283 are women. … Over 500,000 Palestinians displaced at the height of the hostilities; Over 100,000 still displaced. Approximately 18,000 Housing units destroyed or severely damaged. Approximately 108,000 Palestinians homeless."
In the West Bank, there has been a systematic targeting and killing of Palestinians by Israeli forces and settlers since the episode of the kidnapping of Israeli settlers. In less than two months over 500 Palestinians were arrested without charge and placed in administrative detention – most of which were Palestinians who had just been recently released from Israeli prisons in the latest deal with Tel Aviv over an abducted Israeli soldier.

For the neighborhoods in East Jerusalem, the occupation has taken a taxing turn. While the last two months have shown a great deal of confrontations between Israeli Palestinians and security forces, the injustice they have endured holds a legacy that speaks to the currently tense East Jerusalem. Israel has forbidden Palestinians to build new homes, effectively creating an artificial shortage of some 25,000 housing units for Israelis in the Palestinian sector while Palestinians are not able to access most of the Jewish neighborhoods. The results of this today is that a total of 70 percent of Palestinians live under the poverty line and are forced to move outside Jerusalem's borders to acquire affordable housing where they can be legally stripped of their Jerusalem residency. In fact, since 1967, Israel has revoked about 50,000 Jerusalem residencies from Palestinians.

Hence, no matter where Palestinians are geographically located in the occupied territory or inside Israel proper, they are subjected to Israeli hostility. Curiously, the more awareness is given to the question of Palestine, the greater the intensity and the frequency of Israeli state violence becomes. In turn, this disenfranchises Palestinians further and creates episodes in which Palestinians run over Israelis with cars or stab Israeli forces. The nature of Israel's strategy to ethnically cleanse Palestinians, as such, demands greater repercussions by the international community, because while Palestinians will continue to resist injustices, it is clear that international bodies such as the U.N. need to upgrade their intervention to more than just symbolic disapproval of Israeli impunity.

Israel has emerged unchallenged despite the level of its impunity this year. This evasion speaks to the international pattern where state officials' voice outrage against its impunity but do not follow up with concrete sanctions. The Israeli government will levy as much power over Palestinian private and public spaces as the international community allows. With growing awareness of its impunity through transnational advocacy groups such as the Boycott Divestment Sanction campaign, it is time state officials and international organizations answer the call and diplomatically, militarily and economically sanction a state that is ready to impose its colonial ambitions over Palestinian space and even on to holy heritage sites.