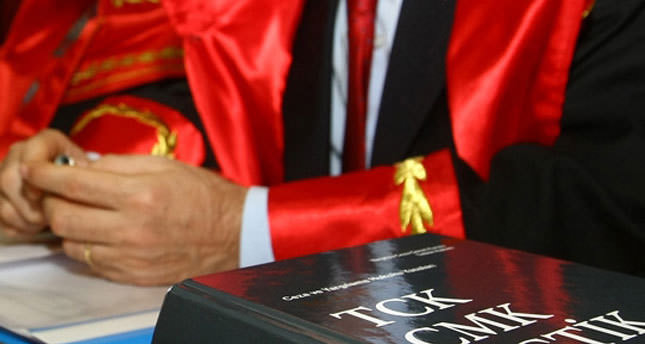 by Bülent Turan
Nov 22, 2014 12:00 am
Turkey has been discussing an important legal issue for the last month: 'Reasonable doubt regarding the search of a suspect's person, domicile or workplace.' Some claim that the legal amendment concerning "reasonable doubt" represents a serious reversal of freedoms, some hold that this move means a transition to a "police state," while others try to impose the idea on society that this is seen "only in dictatorial regimes." However, the "reasonable doubt" criterion in searches, which we imported from Germany in 1929, has been included in all criminal procedure laws until Feb. 2014.

Last February, the government decided to abandoned the 85-year-old "reasonable doubt" practice in order to put a stop to some judicial forces that regard citizens as potential enemies of the state, ruin the weak while sparing the mighty, implement laws according to their "understanding" and simply act like a tutelary power. It replaced "reasonable doubt" with "strong suspicion based on concrete evidence," which looked more liberal. That well-known community that lost no time in turning the "strong suspicion" requirement into a tool for persecuting people as well followed a policy of taking no action against provocations - a prime example of irresponsibility - during the Kobani protests on Oct. 6-7. This policy resulted in the deaths of over 30 citizens including police chiefs with hundreds of people wounded, more than 1,000 vehicles set ablaze and hundreds of public buildings set on fire.

After seeing that the "strong suspicion based on concrete evidence" requirement, which is actually a "progressive" step, can cause much damage to our country due to misuse, that it does not increase civil liberties but, to the contrary, violates the right to life, the government was forced to dispense with the seemingly liberal rules and re-establish the old law. "Reasonable doubt" is in no sense a reversal of freedoms. On the contrary, it exists in all legal systems. First and foremost, Article 5 of the European Convention on Human Rights finds "reasonable suspicion considered necessary for preventing the person committing an offence" adequate for arrest or detention. Accordingly, the only criterion for a body search in the U.K. and Germany is "reasonable suspicion."

But there is no need to go as far as Europe, France, Germany or Britain and to mention universal legal rules to provide justification for "reasonable doubt." When we look at the proceedings of parliamentary Justice Commission sessions last February, we see opposition deputies voice much louder criticism of the government than they do today. These deputies said that 'strong suspicion of having committed an offence' would prick public conscience, that "degree of suspicion required for arresting a person should be different from that required for a body search," that "making the search conditional on concrete evidence would render search impossible" and even adding that "nowhere in the world is strong suspicion required for a search."

It is ironic that those who accuse the government today of curtailing freedoms were railing against it just eight or nine months ago for "abandoning the reasonable doubt practice." The events on Oct. 6-7 showed that impracticable legal rules, regardless of how liberal they are, might actually make it impossible to establish many rights, including the protection of private property or the right to life, and could cost the country very dearly. The recent events that made us realize once again that while taking liberal steps in terms of legal rules may be easy, their actual application may be all the more difficult, and also led us to remember a principle: "In order to attain a judicial ideal, existing laws should have a general, universal, impartial and fair character in addition to being practicable." We hope that the Sixth Judicial Reform Package, which also includes provisions related with "reasonable doubt" and is planned to be discussed next week at the general assembly of Parliament, would further strengthen personal freedoms, increase confidence in the judicial system and lead Turkey to take an important step on the road to becoming a "state of law."