The future of the National Security Council: Falling into a trap? 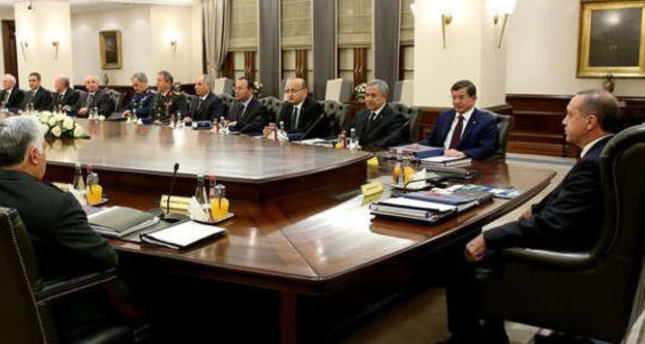 by Erkut Ayvazoğlu
Nov 27, 2014 12:00 am
In recent weeks, the National Security Council (MGK) had its regular meeting, which unusually lasted more than 10 hours this time - 10-and-a-half hours to be exact. However, in contrast to all the discussions around the MGK decisions and the Red Book issue, several important points regarding Turkey's democratic achievements thus far might be disregarded in the future if policymakers underestimate the MGK issue.

The MGK was established in 1961 as a product of the U.S.-supported military junta in Turkey in compliance with general NATO requirements. Similarly, the MGK, like institutions or constitutional organs in other NATO countries, was established in order to develop strategies and national security policies regarding potential threats, in the worst case in the form of wars. As is generally known, unfortunately, the MGK had been used as the main instrument to organize and implement various impositions by military tutelage until recent years in Turkey. The MGK was established as a fundamental organ legally based on the Turkish Constitution after the 1960 coup, which ultimately strengthened its privileges in favor of its military members after the 1971 memorandum and the 1980 coup. For instance, the new and also current constitution, which was created by the military junta in 1982, fundamentally changed certain regulations in favor of the military by aiming to control the civil cabinet and to impose its strictly determined policies. Thus, the MGK's authorities, duties and decision-making processes were generally strengthened in a way that increased the Turkish military's influence at the expense of civilians.

Nevertheless, after the chaotic and military-dominated struggle against alleged reactionary and separatist threats in the 1990s that culminated during the so-called Feb. 28 process and the outset of the EU reform process in 2001 and its intensification during 2003 and 2004, several legal amendments were initiated by civil governments. With the main objective to start Turkey's EU membership negotiations in 2005 and to meet the Copenhagen Criteria, the Parliament passed serious laws and made amendments in 2003 and 2004 in favor of the civil wing of the MGK as well.

Thus, key mechanisms of the MGK based on the military junta of 1980 have been changed. For instance, the number of the civil members of the MGK has increased and for the first time since August 2004 the MGK was led by a non-military administrator MGK representatives in institutions such as the Radio and Television Supreme Council (RTÜK), Council of Higher Education (YÖK) and the Turkish Radio and Television Corporation (TRT) were retracted. Moreover, the period between regular MGK meetings was extended from one to two months. This was a wise step to diminish the militarist appearance both in politics and media for the future, which should be of great importance after eliminating other components of military tutelage, particularly between 2007 and 2011. That is to say, subsequent to these fundamental reforms, military tutelage was actually not abolished because the military was still able to set an emphasis on so-called informal means, e.g., by using media outlets to inform the government of its concerns regarding several incidents. To focus on the era between 2007 and 2011, one has to take various components into consideration that affected the decline of military tutelage.

However, after General Necdet Özel became the new Chief of General Staff in July 2011, the end or decline of military tutelage could be achieved despite serious provocations by members of the military in the aftermath. The amount of political statements as well as the appearance of high ranking generals on television and in newspapers during General Özel's time achieved a fundamental decline that has been praised by various democratic voices. In addition, it was observed that the little number of public statements by high ranked generals solely concerned military topics and not issues related to political disputes as was the case in particular between 1996, 2002 and 2003 to 2011.

Unfortunately, there are clues today that this era not dominated by the military could be changed in the future and public focus could shift to this phenomenon once again. Prior to the regular MGK meeting in October 2014, President Recep Tayyip Erdoğan stressed the importance of the Red Book and underlined the decisions that would be made during the MGK meeting. Consequently, the MGK became the main concern of the public and subsequent to the 10-and-a-half hour meeting, everyone once against focused on the MGK - an ultimately civil-military organ. In this sense, Gülay Göktürk, a well-known journalist, addressed an issue of great importance that was unfortunately not taken into account by most Turkish journalists and media outlets. While the mainstream media was concentrating on the content of the MGK meeting's decisions, Göktürk asked the following question during the time of the meeting in November by underlining the fact that regarding the key instrument of military tutelage, i.e., the MGK, the main question had to be: "Is the MGK the ideal place where all the decisions regarding these issues, i.e. the critical and political decisions, should be discussed and taken?"

After addressing and praising the known positive achievements regarding civil-military relations in the recent past, which took many years and was followed by various difficulties for all citizens in Turkey, Göktürk also pointed to Turkey's still fragile understanding of democracy: "If those elected still do not have the ability to determine threats regarding national security and to identify the necessary measures on their own, without asking the military bureaucracy and accepting these steps as a 'state policy,' thus, we have to consider the quality of our democracy and cast doubt on it, unfortunately. If the government supports the idea that passing its own policies in the MGK would strengthen its policies, unfortunately, this step would again cause a politicization of the military."

It was likely that certain individuals and policymakers will take these very significant warnings into account. Above all, it was very interesting to notice that just one day after Göktürk's piece was published on Nov. 1, Prime Minister Professor Ahmet Davutoğlu addressed the issue indirectly by focusing on military tutelage on Nov. 2while neither journalists nor columnists focused on the issue. Davutoğlu underlined the ambitions that all the intentions to build a new military tutelage will be prevented as was reported in the daily Star on Nov. 2: "The Turkish Armed Forces and the security forces will be strengthened. However, a parallel structure will be not allowed either within in the Turkish Armed Forces or in any other security units. Everyone has to be aware of their own tasks. If there is nothing that is within the borders of your tasks and duties, there will not be a structure that expresses its opinions as was the case during the Feb. 28 process."

As implied above, even though Göktürk's piece was not widely discussed in the Turkish media and press, Davutoğlu's critical and preventive statements with regard to a potential increase of militaristic intentions, ambitions and return to military tutelage are of great importance. Under these circumstances, new reforms in the field of national security may follow by increasing the civil character in the MGK once again. The decline of military tutelage, as was the case between 2011 and 2014, must not be evaluated as a temporary success story, but rather as a process that ultimately has to eliminate the military's political and, consequently, illegal ambitions.

Although the following quoted statements by General Özel do not represent any actual ambitions for military tutelage, similar changes in the discourse of members of the military may easily be transformed into military tutelage-like circumstances. Thus, even the "interesting" statements by in October 2013, January 2014 and Aug. 30, 2014 had to be taken into consideration in a comparative way that would be useful for future ambitions by those seeking military tutelage: "The Chief of General Staff is the commander of the Turkish Armed Forces and a public official who has a state responsibility. His tasks and duties are determined by law. The public official has to analyze correctly where, when and to whom he has to talk about a topic. Because of this, I try not to talk publicly as much as possible."

"We, the Turkish Armed Forces, have no ambitions regarding military tutelage. There will not be military tutelage once again. ... The General Staff will continue to carry out its tasks by staying within a democratic and law-based system." And General Özel's alleged answer to journalists regarding the reconciliation process during a reception on Aug. 30, 2014: "We have said that we will initiate the necessary steps if our red lines are crossed. If this happens we would also say what the necessary steps are. We have struggled for this for 30 years..."

As assumed, it does not seem easy to purify a very important institution from military tutelage and biased reflexes and to transform it into a non-politicized state institution - an institution that has described itself as the main guardian of the system since 1913, and even earlier that. Nevertheless, similar clues should motivate the civil wing of the MGK, i.e., the civil government, to initiate new steps, even by aiming to reform the current status of the MGK. In the long-term, civil-military relations might be in democratic harmony without the existence of a NATO-imposed institution that was created in order to adjust Turkey to Cold War circumstances. Military expertise may be presented to civil governments without the existence of an MGK, too. Democrats and all who stand against potential military tutelage in the future should be aware of this fact.