Does equality before the law ensure justice? 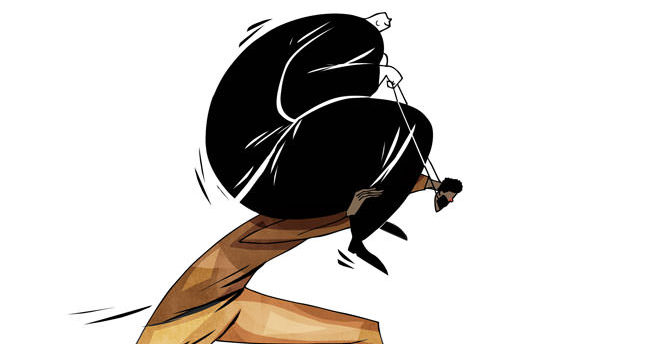 by Sultan Işık Dec 03, 2014 12:00 am
On Aug. 9, 2014 in a suburb of St. Louis called Ferguson, Missouri, a white police officer named Darren Wilson shot dead Michael Brown, an unarmed black youth. Following this event, Wilson was indefinitely suspended from the police force. On Nov. 24, the case concluded with the grand jury deciding not to indict Wilson for Brown's death. After the verdict was announced, demonstrations began in many cities across the U.S., particularly in St. Louis. Black Americans who feel that after every murder they are actually getting nowhere in their long struggle for equality, took to the streets to demand justice. They are aware that equality before the law can never bring them on par with white Americans. So what they demand now is not only equality with whites before the law, but justice. While the issue of how to ensure justice is a big question, it is true that justice contains intellectual and mental transformations and would at least bring greater benefits than equality. The Oscar-winning movie "Crash" (2004) is a good illustration of how complex this issue is, and it demonstrates how the idea of justice has not gained as wide an acceptance as one might think with regards to human rights and social acceptability. It is a movie that depicts how lives that are interwoven with ethnic, religious and racial differences cannot actually be blended successfully together.

The movie begins with the scene of a car crash involving two automobiles. In the driver's seat of the different cars are two women, one of them a Latino and the other an Asian. They climb out of their cars and begin to berate each other for the mishap, making racial jibes and despising each other's accents while trying to justify their own actions. The more they find faults and defects in each other, the better citizens of the system they themselves become. In this way, they have a greater chance of eliminating the other by feeling stronger and more justified. Though both of them are citizens and equal before the law, they try to gain legitimacy rather by marginalizing the other through emphasizing their acceptance by the nation.

In the next scene, we see a Persian shop owner and his daughter arguing with a gun store owner while buying a revolver in a country where it is legal to possess a firearm. When the white store owner begins to make fun of the father's accent, mistaking him for an Arab, although he speaks Persian, and calls him "Osama," the father shouts and says he is an American citizen. He only wants to be accepted as a citizen on par with the white gun store owner in this country where he is a taxpaying citizen. But of course, for the white American he is the "other" who cannot even speak decent English, and who he can drive out of his store when he gets angry. The store owner would never dare treat a white American in the same way. He knows that he would end up in court with a severe penalty. On the other hand, he knows very well that he can easily push around an American of Persian origin – a naturalized citizen – and get away with it. In an indirect way, the store owner is telling the Persian-American that neither his naturalized citizenship nor his presumed rights mean anything. The movie contains other wonderful examples of this issue in different settings, and the recent Ferguson events showed that the same social and legal attitudes depicted in the movie are still aimed toward black Americans today.

The main black characters in "Crash" are a high-ranking police officer and two carjackers who are close friends. One of the carjackers asserts that everything stems from racism, while the other explains every time – through plausible arguments – that this is not the case. Meanwhile, in a similar fashion two police officers are also portrayed as good cop/bad cop. One of them always treats black people like second-class citizens and despises them, but the younger cop prefers a more humanistic approach, and voices his disapproval of the other's attitude.

Actually, at the end of the movie, the cop who always sides with black people and treats them more humanely picks up the right-minded carjacker who is hitchhiking. They proceed to have a pleasant conversation, but the young white officer feels uneasy despite his good intentions. When the carjacker pulls a statuette of a saint out of his pocket, which he believes brings luck, the officer thinks it is a gun and getting nervous, shoots and kills him. It is both ironic and agonizing that they end up victims of each other in the end, although they tried sincerely to understand the other side from the outset of the movie.

In fact, this murder is an excellent example of how social biases and prejudices always prevent those who are socially marginalized from becoming good citizens of society. Even a police officer who cannot extricate himself from social "othering," in spite of defending black people's rights in all his sincerity, does not hesitate to pull the trigger when he feels his life is in jeopardy. So, what kind of pressure do black Americans, who never feel secure psychologically, experience while trying to live with whites who do not refrain from risking the other's life at the slightest hint of danger to their life? Is one's life more valuable than the other's?

This is just what the Ferguson events reveal. After the police officer "defended himself," saying that he had fired his gun because he feared that his life was in danger, it was discovered that the black youth was unarmed. In other words, the police officer intentionally killed a man due to perceived danger after shooting him multiple times, but the grand jury decides not to indict him since he did this within the limits of the powers conferred to him. But following this decision, black Americans, who believe that they, like Michael Brown, can also be easily killed at any moment for no reason, were supposed to welcome the verdict and forget it without creating trouble. Equal citizenship before the law has never promised, or could not promise them justice.

With the announcement of the verdict, protests began in many cities and security measures were tightened. While people wanted at least a trial for this unfair killing, the authorities did not go beyond issuing warnings about ending the protests without anyone getting harmed.

The Ferguson ruling showed once again that in order for people to live without dominating and marginalizing each other, not equality before the law, but a change of social mindset and elimination of biases together with a concern for fairness is needed. Although there is no consensus yet on exactly how to ensure justice, a search for living together in a more equitable society must start from somewhere in line with new debates on the issue.