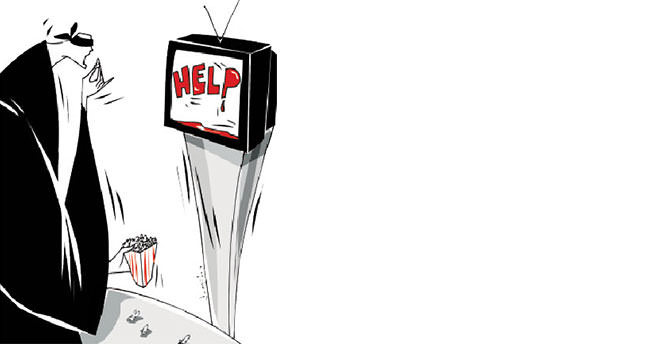 by Mohammad Pervez Bilgrami Dec 09, 2014 12:00 am
In the last few years Turkey has suffered many assaults from deceitful Western powers such as espionage targeted at then Prime Minister Recep Tayyip Erdoğan's office, the Mavi Marmara killings by Israeli security forces acting with full knowledge that they have pro-Zionist powers on their side, the Gezi Park protests instigated by the country's pitiable opponents, and the Dec. 17 and Dec. 25, 2013 graft episodes orchestrated by the secretive Gülen Movement to undermine the Justice and Development Party (AK Party) government.

In September of this year, euphoria erupted in the Western and colonial lackey Arab media after reports that the Islamic State of Iraq and al-Sham (ISIS) had captured parts of the small border town of Kobani in Syria from the Kurdish Democratic Union Party's (PYD) People's Protection Units (YPD), an affiliate of the PKK.

The assault on Kobani was another intrigue in the string of events crafted by Western colonial manipulators and their Arab sidekicks. Using the propaganda tools at their disposal, these elements tried to portray Kobani as an enormous humanitarian catastrophe and their regional servants responded with material help and joined a coalition, vowing to get rid of ISIS, their own Frankenstein's monster.

The strategy was part of the West's desperate efforts to suck Turkey into the Syrian swamp using air and ground forces on the false pretext of saving Syrian Kurds. That put Turkish policymakers in a dilemma where on the one side they had to deal with their own upset Kurds and on the other, they were to act to thwart the ISIS advance near their border. The Kurdish-populated border town of Kobani, with a population less than 50,000, was already deserted when ISIS advanced on it. The populace of the city and its surrounding villages had found refuge in Turkey. Almost 200,000 refugees flocked to Turkish border towns in addition to the 1.5 million Syrians who had already received shelter in Turkey since Syrian President Bashar Assad's militias began slaughtering Syrians and laying waste to cities and towns three years ago.

The U.S.-led international coalition against ISIS tried to put pressure on Turkey to join their crusade, not only bomb ISIS targets and use its soldiers in a direct fight against the militant group. Do these people even realize how absurd their demands were? Turkish soldiers are not there to serve their imperial objectives.

They instigated Kurdish citizens of Turkey to go to the streets to put pressure on Ankara to get bogged down in the Syrian quagmire. Turkish leadership is not unfamiliar with such tricks. The Western bloc, which appeared to shed crocodile tears over Kobani, has shown its cold-bloodedness over the mass slaughter of Syrians by Assad's forces. The Western strongmen will not even agree to some basic measures such as a no-fly zone and safe zones to protect Syrian victims of war.

In response to the U.S.-led collation's political games, Turkish Deputy Prime Minister Yalçın Akdoğan said: "If you are that sincere about the matter, let's do this together. Are the Turkish soldiers your mercenaries?"

The same Western leaders and their propaganda machinery were asleep when big cities like Mosul, Hama, Homs and Idlib were being assaulted and millions were forced to leave their homes.

The faithless regional lackeys are always more than ready to faithfully serve their colonial masters. In orchestrated publicity moves, one of the Saudi princes – an air force pilot – led airstrikes on ISIS positions along with the first female Emirati pilot. When Israel bombs and kills Arabs, we never hear about the United Arab Emirates or Saudi military capabilities. Instead, we notice their tails tucked between their legs.

They will also not use their vast military hardware against Assad. Not only do they not fight injustice, they are also proven misers in helping Assad's victims. Yes, for the sake of vanity, they will be happy to write big checks. They will not part with small amount of dirhams and riyals to relieve the pain of war victims, but splurge their fortunes on a belly dancer.

One prime target of the Kobani flare-up was the ongoing Kurdish reconciliation process. If successfully achieved, it will definitely be a game changer for the region. Prime Minister Ahmet Davutoğlu has been seriously thinking about his country's role in the new regional order. On Oct. 19 he declared that Turkey would not become the guardian of borders set by the Sykes-Picot Agreement.

Washington, guided by the notorious U.S. "deep state" and without any clear road map to resolve regional problems, just wants more wars and bloodshed. Their ploy to get Turkey into the regional mess miserably failed once again.

Suffice it to say, the U.S. strategy in Syria does not seek to oust Bashar Assad in Damascus. It therefore, at least for now, does not welcome the
proposals to create safe zones and no-fly zones inside Syria. All the U.S. noise about ISIS is a smokescreen to achieve other ulterior motives of the Zionist-driven "deep state."

President Recep Tayyip Erdoğan vehemently criticized modern "Lawrences" of Arabia for their silence on the death and destruction in Aleppo where more than 1 million people are under siege, while questioning the strategic importance of the small border town of Kobani.

The Western propaganda machinery and Arab regime media created the impression of a humanitarian crisis in Kobani and diverted attention from the relentless attacks by Assad's forces on civilians across Syria. Now it is up to these people to explain their falsehoods.

Turkey has successfully repelled the latest assault against it using diplomatic tools. If the successors of Lawrence of Arabia do not mend their ways, the country may be forced to take harsher action against provocateurs and saboteurs.

On the other hand, those who think constructively will find Turkey a genuine and most reliable partner in achieving peace and order in the region.

Turkey's humanitarian record is there for all to see, whether it is helping the masses of Syrian and Iraqi refugees or victims of conflicts elsewhere.

To the short-sighted autocrats who seem to take pride in serving the modern "Lawrences," keep your impudence local. Your provocations may come back to haunt you.