The Tahşiye Case: Not a Dan Brown novel 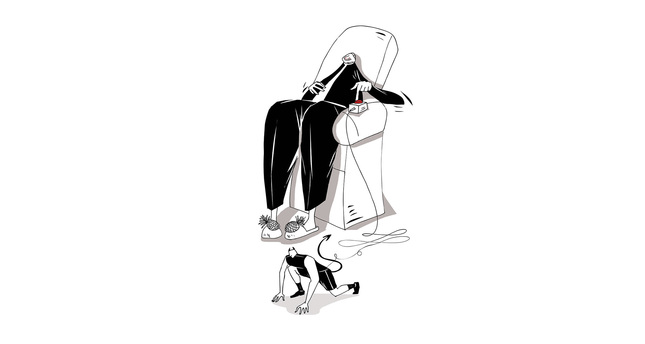 by Yıldıray Oğur Dec 15, 2014 12:00 am
Our story begins in Barla. After the Sheikh Said uprising, Bediüzzaman Said Nursi was exiled to Barla on the shore of Lake Eğirdir. A year later, Captain İbrahim Hulusi Yahyagil paid a visit and became his first disciple. Mehmet Doğan, or Mullah Muhammed as he is known in Kurdish provinces, was born in 1943. He heads the Nur Movement, which follows the teachings of Bediüzzaman's disciple Hulusi Yahyagil. They insert informative references in the Risale-i Nur – a commentary of the Quran by Bediüzzaman – books they publish. Contrary to other groups, they are distant to democracy. Again, unlike the others, the men prefer wearing cloaks, growing beards and women wearing black chadors, and are involved in public activities and debates.

A group that splintered off from the Yeni Asya newspaper founded the Tahşiye and Rahle publishing houses on June 1, 2004.

Gülen, speaking about the traps some are trying to lay for him, said: "You could, for instance, come up with something called the Party of Ferocity [Hizbulvahşet]. What else? After Hizbulvahşet, they invented al-Qaida. Tomorrow, they could develop new things. They could, for instance, create something called Tahşiye. Provided that they could, God forbid, organize, they might attempt to make these people mingle with true Muslims, book-reading Muslims. They might arm themselves in order to increase their power. They might hang posters of the individual in the back cover of books in their houses.

"We annotate [the Nur Movement], they might claim and call themselves the Tahşiye group. Then they will give them AK-47s." The group Gülen referred to as if it does not exist actually has been around for many years. The Tahşiye publishing house has been around for five years, but it is Gülen who first referred to them as "Tahşiyeciler" (the Tahşiye group). This odd sermon was followed by a series of odd developments. First, the Turkish daily Zaman printed a huge story based on Gülen's claims with the headline, "Those who invent terrorist groups are involved in a new plot." The story notes that Gülen warned his followers that those who create terrorist groups for their own interests could be involved in a "new plot."

The accusation that the Tahşiye group was involved in a plot was mentioned in the "Tek Türkiye" (One Turkey) series that aired on STV in which the Dark Council in the television show discusses the plot. http://vimeo.com/93191955 On April 10, it was Zaman columnist Hüseyin Gülerce's turn to get involved. His headline was, "Why did Gülen warn?". Five days later, Ahmed Şahin, who writes religious stories in the Family page of the paper, interestingly thought of addressing the same matter. A week later, the conspiracy planned around the Tahşiye group was once again one of the topics addressed in "Tek Türkiye." The conversations within the Dark Council on the TV show, where all the bad guys congregate, were as follows:

-"Remember that the group was invented, but they were exposed before we could use them? What were they called? Tahşiye or Tahşidat? They are uncovered. We should not let this go. Let's definitely change the name and proceed. Will it be us who supply the weapons all the time? Let them supply it."

-"What should the name of this religious organization be?"

-"Rahle or something. Something that has religious symbolism."

Rahle is no coincidence. The other publishing house of Mehmet Doğan's group is named Rahle.

Bugün daily columnist Nuh Gönültaş used this dialogue from the television show without his April 26, 2009 article with the headline, "Tahşiye group is exposed, let's find a new name."

What is interesting is that two months later, on June 12, 2009, Taraf daily published the Fighting Reactionaries Action Plan with the headline "The Plan to finish off the AKP and Gülen." AKP is a denigrating acronym used by the opponents of the ruling Justice and Development Party (AK Party).

The Tahşiye group, which was mentioned as a threat first by Fethullah Gülen, followed by Zaman daily news articles and columns and eventually exploited by scare tactics in STV's show "Tek Türkiye," was now ready to be investigated by prosecutors and the police. On January 22, 2010 the operation was launched. The police chiefs who launched the operation then were Tufan Ergüder and Mutlu Ekizoğlu, both of whom were detained on Sunday. The police detained 122 people in several cities, including Mehmet Doğan, who is both blind and has multiple sclerosis. Among those group members arrested were a prosecutor, bureaucrats and imams.

Newspapers reported the story as an al-Qaida operation. The Istanbul governor of the time, Muammer Güler, in a statement about the operation, said: "The police have found links between some group members and the al-Qaida leader responsible for Europe, Turkey and Syria, Louai Sakka, and Habib Aktaş who is suspected of involvement in the November 15-20, 2003 bomb attacks in Istanbul and who was later killed in Iraq."

Among the statements the Istanbul police released to the media were certain private information about those detained that one seldom sees in an operation against a terrorist group. For example, the Hürriyet daily, based on a Doğan News Agency article, reported the story as: "The 57-person group, which included a teacher, two imams, two homosexuals and two pimps, was disbanded on January 22 as a result of an operation coordinated by the Police Department Counterterrorism Bureau is claimed to have been inspired by former Vakit columnist Mustafa Kaplan."

As it has appeared on the Wikileaks documents, the U.S. embassy in Ankara consulted to the Turkish National Police and sent the following telegraph about the operation to their headquarters on 27 January 2010: -Refuting Turkish press reports to the contrary-, Turkish National Police (TNP) contacts tell us their investigations into recently detained groups of alleged domestic Islamic extremists reveal no plans or intentions to attack American interests in Turkey.

The TNP detained or arrested up to 130 individuals in separate operations across the country, beginning with 13 arrests January 15 in Ankara (REF IIR). Both the TNP and sensationalist Turkish press referred to the detained and arrested individuals as Al Qaeda members. Our assessment, based on liaison with the TNP and other Turkish security agencies, is that the suspects are not actually believed to have ties to al-Qaeda; rather, "al-Qaeda" is being used by the media and police as a catch-all term for suspected Islamic extremists regardless of organizational affiliation, or whether they have an organizational affiliation. The detentions and arrests appear to us to have been pre-emptive. The TNP's goals may have been to disrupt nascent Islamist cells and show their members that their activities are subject to monitoring. We understand charges against many of the detainees may be difficult to substantiate. We believe most detainees have been released and that persons still in custody have been formally charged.

Everything happened as Gülen described it and "Tek Türkiye" broadcast it. However, police officers linked to the Gülen Movement were guilty of an astonishing series of blunders during the raids.

The three hand grenades, which were the basis of the al-Qaida charges, were found in a house used by the group as a prep school in the Bahçelievler neighborhood of Istanbul. However, the police search began even before the head of the school arrived. The moment the bombs were found was not documented. The person who was accompanying the police during the search was performing his ritual ablution when the bombs were found. The real scandal was the fact that the police found no fingerprints belonging to the suspects on the bombs. The only fingerprints belonged to the police officers, who were said to be conducting the search wearing gloves.

When asked in court how the fingerprints happened to be on the bombs, the officers could only suggest that "maybe the gloves had holes." The illegality of the evidence listed against the group was noted in an expert report filed by two renowned criminal law professors, Adem Sözüer and Bahri Öztürk. Still, it took 17 months for Mehmet Doğan and the rest of the group to face the court where they were released in the first court session. The prosecutor in charge of the case was rewarded by being elected a member of the Supreme Court of Appeals. Sunday's operation was the result of legal complaints lodged by the victims of this case.

The Tahşiye investigation, the facts behind which were ignored by all those who claimed to represent the freedom of media and probably viewed as fiction coming from a Dan Brown novel by international commentators, actually uncovered the most tangible proof of the Gülen Movement's infiltration of the state. The button pressed by Gülen over in Pennsylvania triggered a swift response from Gülenist media outlets, to be followed by the police and prosecutors under his thumb. The case clearly shows the hierarchical structure dominant in the Gülen Movement.

This was the first time we saw Gülen himself, not one of his prosecutors or police officers, launchan operation. Gülenist media outlets did not follow any journalistic standards; rather, they worked like judge and jury. The Gülen Movement is very experienced in such cases, but this was the first time they were guilty of overconfidence and clumsiness. For those who are willing to see the truth, this case is the clearest evidence of the parallel structure created by Gülen. There is no reason to give a detailed explanation.