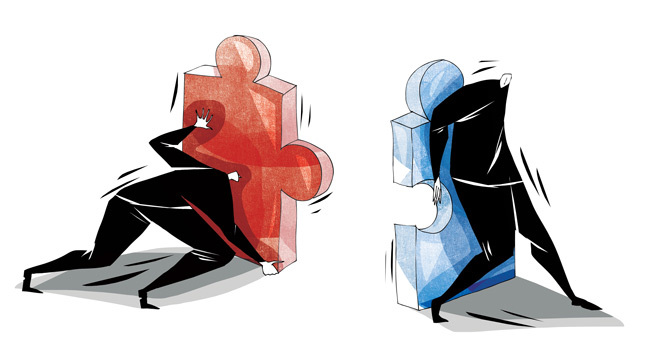 Turkey has made significant strides in resolving the Kurdish issue, which caused constant tension across the country, in the last few years.Today, after overcoming serious obstacles that arose in recent months, Ankara is on the cusp of solving the issue once and for all

Turkey's quest to find a solution to the Kurdish question and the PKK problem goes back to the early 1990s. But this quest has assumed a more systematic character after the PKK's leader, Abdullah Öcalan, was handed over to Turkey in 1999. Negotiations between the government, military officials and Öcalan in the İmralı Island prison have begun to be conducted on a systematic basis for the first time in this period, yielding some results. In 2000, the PKK agreed to pull its armed groups out of Turkey on Öcalan's order. In return, then Prime Minister Bülent Ecevit, put a general amnesty proposal on his agenda envisaging the disarmament of the PKK. But Ecevit's move was not approved by some generals, who had played an active role in toppling the Refah-Yol government during 1997-1998 and had become the architects of the process termed in Turkey, the Feb. 28 postmodern coup. It turned out later that these generals, who had been close to Washington and highly active during those years, suggested Öcalan "not pull his armed groups out of Turkey."

However, the PKK suspended their armed struggle between 1999, when Öcalan was handed over to Turkey, and 2004. The Turkish government did not take a step to disarm the group during that period. More precisely, it refrained from making that move. Even though an ordinary general amnesty law would be enough to disarm the PKK, the prime minister at the time did not enact such a law. Or rather, such an amnesty law was actually made but because of opposition from the generals who had been dominant in the Turkish Armed Forces (TSK) and close to Washington, the draft amnesty bill was shelved. A narrow scoped version of the original bill was passed into law, encompassing prisoners and convicts, excluding PKK members.

Today, it is still said that Turkey missed an opportunity to disarm the PKK between 1999 and 2004. But the truth is that Turkey did not miss that opportunity, it's only that the country lacked the political will that was strong enough to use the opportunity. Of course, the U.S. did a good job by delivering Öcalan to Turkey, but it opposed negotiations with him. Apart from several short-lived attempts by Ecevit to start a dialogue, the U.S.-aligned generals did not allow the government to negotiate with Öcalan. It's not so hard to see that behind that obdurate stance taken by generals was the U.S.

Öcalan was excluded again from the talks that began under Norwegian auspices in Oslo between 2006 and 2009 between officials from Turkey's National Intelligence Organization (MİT) and PKK leaders. It was as if an invisible hand banned Turkish governments from negotiating with Öcalan. But the government at the time realized during the Oslo talks that a quest for solution without including Öcalan would be futile and not yield any result.

The talks between the state and the PKK have been directed to İmralı, i.e., Öcalan, upon this realization. Negotiations with Öcalan between 2009 and 2011 did not bring about any result despite offering hopes. This is because some powerful groups in the bureaucracy disagreed on the democratic solution model. And the PKK's militant leaders had no thought of facilitating the attempts for a democratic solution either. During the period that began in 2009 and came to be called the "democratic initiative process" in Turkey, the PKK carried out some provocative attacks. When six soldiers were ambushed and killed in the Reşadiye district of Tokat province, the democratic initiative process that was still in its infancy was sabotaged. The Turkish government did not suspend talks with İmralı despite these provocative attacks. Hardly a few days passed after Öcalan sent a message to the PKK in which he said: "I am about to sign the most important agreement ever on behalf of the Kurds," when the PKK ambushed and killed 13 soldiers, this time in the Silvan district of Diyarbakır province. Following that attack, which put an end to the democratic initiative process, Turkey drifted into a bloody period that would last for two years. While the PKK launched successive attacks on military and civilian targets, the government responded with new security policies. As Öcalan stepped in again in late 2012, this bloody period gave way to peace talks. Talks with the PKK leader resumed and a new peace process called the "reconciliation process" began.

Ongoing for the last two years, this process has made significant progress. Although the PKK has not fulfilled its promise to pull its armed groups from Turkey, the guns silenced. The reconciliation process faced its biggest crisis when the Islamic State of Iraq and al-Sham (ISIS) laid siege to the Syrian Kurdish town of Kobani. The PKK provoked street violence just when the time came for its disarmament and participation in democratic politics. PKK-linked youth gangs killed more than 50 civilians in southeastern Turkey. While large-scale violence erupted in Kurdish towns, the PKK also took up arms and launched attacks on both soldiers and civilians.

As the PKK and the Peoples' Democratic Party (HDP) drew huge reaction from the public due to these attacks, the government announced that the reconciliation process "fell into turbulence." The Kobani provocation inflicted a severe blow to the process. It also caused popular support for the reconciliation process to decline, but the government did not end the process despite the violence. While acts of violence continued, the government kept talking with Öcalan and forced the Kurdish political movement to return to the negotiating table. And this effort seems successful for the moment.

A HDP delegation went to İmralı Island and met with Öcalan after the tension caused by the Kobani protests receded. The delegation returned with significant messages regarding the direction the reconciliation process will take hereafter. Members of the HDP delegation said that Öcalan had prepared a draft text that could be discussed by the two sides and that negotiations could begin if both sides agree. Öcalan added that he may call for a disarmament congress to be convened if both sides reach an agreement. Now, attention is focused on whether negotiations over the text prepared by Öcalan will begin. According to initial reports, the PKK gave Öcalan full authorization to negotiate the draft text. The government expects the PKK to totally put an end to actions that disturb public order. It measures and weighs the sincerity of the PKK and HPD in this matter. It seems difficult for negotiations to start if the PKK cannot pass this sincerity test. But the MİT assured Öcalan that his draft could be negotiated.

The text entitled "The Peace and Democracy Negotiation Process Draft" is expected to be shared with the public soon. HDP deputy Sırrı Süreyya Önder, a member of the delegation that visited İmralı, said Öcalan proposed a solution "based on equal citizenship." The reconciliation process itself started after both sides had agreed on a solution to be based on "equal citizenship." The government's vision for solving the Kurdish question and the PKK problem also relies on equal citizenship. Turkish government would not refrain from granting the MİT the necessary authorization for negotiations that will be conducted within this framework. But Öcalan and Qandil (PKK's leadership) have different expectations about the method. Öcalan "wants to see a Monitoring Committee be part of the settlement process and to 'formalize' the negotiations between the parties." It may take some time to resolve disputes regarding technical issues. The talks between the government and Öcalan are about to move to a new stage. Negotiations between Öcalan and the MİT are entering a more qualified and result-oriented period. It is seen that the parties have come to an agreement on this matter. If the process is conducted efficiently, the PKK's obsession with armed struggle will also be overcome.

Ankara's homework is not much difficult. It can easily secure popular support for reforms that will enable the PKK's disarmament and transition to democratic politics. Even house confinement for Öcalan is possible in return for a farewell to arms. But it's questionable how ready the PKK leadership in Qandil is to end armed struggle for good. They would still have large room for maneuver in case of disarmament. The PKK may disarm some armed groups and send them to Turkey, while keeping the rest due to the turmoil in Syria. But on the condition that it announces the end of armed struggle against Turkey. Turks and Kurds believe in peaceful settlement more than ever.

At this stage, it is observed that the Kobani crisis that broke out on Oct. 6-7 was left behind, the democratic solution model agreed by both sides gained strength, and that the Qandil front which seeks an armed solution to the Kurdish problem weakened.