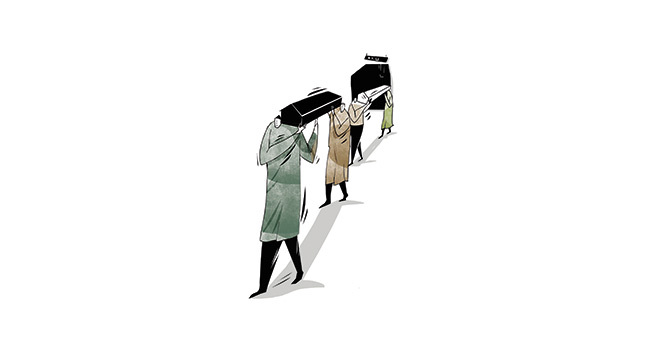 Taliban’s school attack in Peshawar on December 16 left its mark as one of the most despicable and atrocious attacks, happened in near history. In Pakistan parents are more reluctant to send their children to schools which are now potential targets for the Taliban

The Dec. 16, 2014 massacre in Peshawar, Pakistan left 132 school children dead. In the aftermath of Dec. 16 a total of 141 children died including members of staff. It has been perceived in many cases that Islam is the associate of the ongoing terror attacks in the world, however it has been lenient to Muslims. It is because of this that the Tuesday attack in Peshawar, is considered an extreme act of Islamism in the understanding of the West. The fact that Taliban militants claimed responsibility makes it understood that this is a war that was executed by Muslims against Muslims.

The big question, though, is: "Why did they target children?" While the Taliban in Pakistan claims that this act was carried out because the army "targets our families and we want them to feel pain." It must be said to the world once again that targeting children is the most inhumane of acts. Peter Bergen, CNN's national security analyst, said he believes it is a widespread backlash against U.S. foreign policy over its North Waziristan operation. Terror and terrorist acts have been condemned with extreme languages around the world. It is currently a worldwide problem that happens in various nations almost on a daily basis. It has always been the case that Islam does not support acts of terrorism. However, terrorism has been seen to be associated with Islam worldwide. The Pakistani government has reinstated the death penalty in cases of terrorism and announced three days of mourning in the nation. Pakistan has also received great support from around the world, even by unexpected countries like India. Several Islamic leaders have come out strongly to condemn the act of terror that took place on Tuesday in Peshawar. For instance, the Nobel Peace Prize winner, Malala Yousafzai, condemned the cold blooded killing of innocent school children. Remembering the fact that she was also a victim of a shooting in Pakistan as a student when she was shot on her way to school, she urged that those who are opposed to Islamic militant violence "will never be defeated." She reiterated that she condemns such atrocious and cowardly acts and is in unity with the Pakistani government and military in combating terrorists. British politicians and leaders also joined hands in condemning the attack. British Prime Minister David Cameron described the scenes that were unfolding in the city of Peshawar, the targeting of school children, as horrifying and appalling. He was shocked by the news from Pakistan. We have been made aware that we are dealing with very heartless and unmerciful people in this fight against terrorism.

Following U.S. President Barack Obama's remarks, the Taliban are known to be responsible for this act of terror. However, Obama was even amazed that this time around they unleashed their "depravity" on school children. He also joined other leaders in condemning the atrocity. His pledge was to continue support for the government of Pakistan in combating extremism and terrorism. While this raises many questions on the ethics of U.S. involvement in the region, it is believed that these condemnations will promote peace and stability there. U.S. Secretary of State John Kerry also joined others in condemning the attack at the Peshawar army school alongside Obama. As a mark of solidarity, Indian Prime Minister Narendra Modi, requested all schools in India observe two minutes of silence a day after the attack. He added that India is firmly together with Pakistan during the national day of mourning. When he spoke to his counterpart in Pakistan, he promised any sort of assistance during the hour of grief. Through all of this, Modi was showing solidarity with Pakistan and passing his deepest condolences to the Pakistani families. All of this shows how extremism is condemned by the entire world.

Another show of solidarity was manifested by the Turkish government when U.N. ambassador Halit Çevik announced one day of national mourning in solidarity with the families and the people of Pakistan. He said that the attack at a school in Peshawar, Pakistan has once again manifested the complexity and brutality of terror that is faced by the world. Together, he joined other world leaders to condemn the attack in the strongest terms possible to show his solidarity with and support for Pakistan. Attacking children and schools is the most appalling thing that terrorists can do. Schools are considered to be places of learning and a place without guns. Such places are vulnerable as there are no tight security measures in place. Children are also vulnerable, as they have no training to combat such situations.

Why mothers do not want to send their children to school anymore?

The horrific attack terrified school children and parents. In Pakistan, parents sent children to the army public school because "it is known for its high standard and quality of education" Haji Dost Muhammad, 52, whose son died in the Peshawar attack, said. Muhammad Fawad, who buried his son, said: "Despite my poor financial condition, I did everything to give him a quality education. He was my everything and in just one moment I lost everything." Tahir Ali expressed his sorrow as he came to the hospital to collect the body of his 14-year-old son Abdullah: "My son was in uniform in the morning. He is in a casket now. . My son was my dream. My dream has been killed." Inevitably, the hard questions will have to be asked and answers will have to be found in the Peshawar school massacre. My real worry is that parents will not send their children to school when the state is no longer there to protect its own people from extreme violence.

Despite that horrific attack, Pakistan is known for being a great nation and resilient. Mohammad Anis, 13, speaking from his hospital bed said: "I am determined to go back to the same army public school where terrorists tried to kill me and where the terrorists killed my classmates. . On hearing the gunshots, our teachers quickly shut the door of the auditorium in an effort to stop the terrorists from entering there. But the attackers broke the door and sneaked into the auditorium. Once inside the hall, they tried to kill all the children. Students were falling down and bleeding and one bullet also hit me in my arm."

In the past, similar attacks happened at girls' schools but this time they targeted a boys' school. Hence, the mood of an ordinary Pakistani is demanding justice, peace and zero tolerance for terrorism and extremism. Schools are also considered to be places that instill morality in people and when such places are turned into places of unspeakable horror, it instills fear in children who can even turn their back on attending schools. These terrorists thought that they only wanted to inflict pain where it hurts the most. The children of Pakistan have been left horrified by the event. This traumatic experience will live with them for a long time. It can only be asked now whether these youngsters, the very ones that remain alive, will one day ask for revenge. This is where I urge the international community and the government of Pakistan to take all means necessary to avoid the indoctrination of these survivors, because even though revenge ban be sweet, justice is even sweeter. Now, the reality is that some children hate school.

* Working for the High Commission of Pakistan in United Kingdom