Toward a multi-polar horizon and forging for a Muslim pole 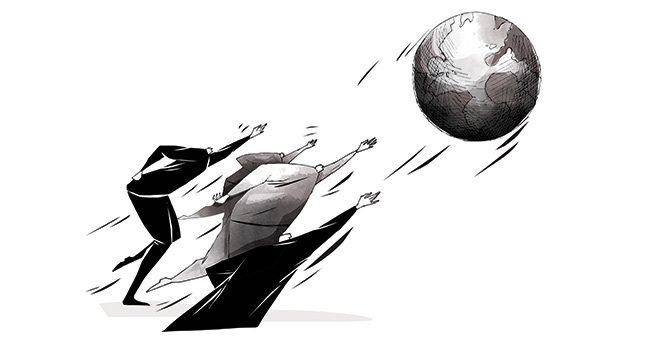 by Hatem Bazian Dec 30, 2014 12:00 am
As we come to the end of 2014, a global shift is underway with China possessing the world's largest real purchasing power adjusted gross domestic product and accounting for $17.416 trillion, surpassing the U.S. into first place. The economic shift has been underway for some years but points to a more profound global change that is transforming power relations and ushering in the possibility of a multi-polar world.

The world has been in flux since the end of the Cold War in the 1990s. Certainly, the U.S. attempted to leverage its post-Cold War unipolar status into permanency through the use of force and control of natural resources. However, the challenges that faced the U.S. in using military power in Iraq, Afghanistan and the war on terror coupled with the massive recession that began in 2008 weakened and undermined this effort. The hypothesis of America's neo-conservatives that positing the use of military force to take over and control oil can be leveraged to compensate for its declining economic power has been proven to be a desert mirage. Today we are certain that military power alone is not sufficient to maintain and extend the
U.S.'s global power. The adventures in Iraq and Afghanistan rather demonstrated the limits of the use of force to achieve a set of goals.

One can readily observe the U.S.'s diminishing superpower status and its inability to muster the needed hard or soft power to achieve any of its strategic goals, be it in the Muslim world or other parts of the globe. The shift in economic terms and the ascendency of China on the global stage is symptomatic of the period to come that will witness the emergence of a multi-polar world. How this will take shape is still to be determined, but certain strands are already evidenced around the world.

Indeed, the multi-polar world will have large states and regional clusters projecting power within a more confined and highly competitive economic and political global structure. China's economic power cannot be underestimated and its emergence as a major global player is felt across the world, including in U.S. markets, with major investments and dominance across many economic sectors. In this context, China will constitute an important pole in east Asia that will be connected to a broader regional economic order with massive global reach that is integrated into the world's financial and political systems.

South America's emerging economic order is another area with a real possibility for a regional power structure and pole to take shape in the near future around Brazil, Argentina, Venezuela and others in South America. The potential for South America is real and, for the most part, countries there have been able to collectively overcome centuries of U.S. dominance and interference through the Monroe Doctrine. A U.S. "backyard" no more and an independent future on the horizon is already at hand despite constant attempts at derailing this effort by successive U.S. administrations.

The Muslim world likewise has the potential to constitute a powerful pole that can contend with shifting global alignments and power clusters. Certainly, the contenders for this pole cluster include Turkey, Iran, Malaysia, Pakistan, Egypt (not under the current leadership), Gulf states (with changes in policy and orientation) and North Africa. For the Muslim pole to emerge, lots of work must be undertaken. Critical as a starting point is an end to narrowly constructed nationalism that is a vestige of an old, collapsing and unsustainable order forged in the late 19th and early 20th centuries.

In addition, regional actors must bring to an immediate end the extremism and bloodletting that is based on hyped up and dumbed down sectarian differences. Indeed, these existing differences are constantly used by regional and global elites and ruling families to maintain and extend power over existing resources and markets in the region.

The conflicts centering on creating an Islamic state or supposedly bringing back the caliphate are more symbolic of people's aspiration for justice, equality, dignity and fairness that are intentionally problematized and distorted to keep these dreams at bay. A participatory and inclusive political, social, economic, cultural, linguistic and religious structure is the only way toward success. The challenge is to bring this structure to life in the middle of chaos. The Muslim world must embrace this to become a viable power pole in the emerging global order and I believe that Islam has the needed epistemological understanding to support such inclusive efforts. Diversity is a divine manifestation in the created world and by embracing it we partake in God's set purpose for humanity.

At present, both Turkey and Malaysia are the only contenders for this Muslim pole role due to their vibrant economy, stable political order, dynamic population and global reach. The challenges facing both states are for the most part internal. Indeed, resolving persistent issues centering on minority rights and how best to include all members of society as full partners in the national project are pressing issues. Ethnicity, culture, language and religion are very easy to mobilize and leverage to disrupt a healthy development project and the solutions to this are greater levels of inclusiveness rather than defensiveness and externalizations of the causes. European nationalism was born out of Europe's historical context and it should not be the basis of imitative and exclusivist projects in the Muslim world because its trajectory and history are distinctively different.

The U.S. and Europe will have power and leverage in this newly emerging world, but not the same as it was before the 1990s, and will increasingly be dependent on other players on the global stage. To a certain extent, the U.S. and European debates on immigration are more emblematic of fear and uncertainty about the economic and political future in a rapidly changing world as well as the shifting racial, social and cultural identities in the global north. The post-World War II economic, political and racial order is no longer tenable for the U.S. and Europe. Thus, the unease and inability to contend with it is the major internal and external challenge facing both powers.

What we are witnessing in the U.S. and Europe is the emergence of the global south in the global north. Certainly the structures of control from the global colonized south are being instituted in the global north to deal with this economic, political, racial and culture challenge. Rather than embracing a de-colonial approach to inclusion and a dynamic global vision the north opted for a securitization strategy.

The challenge for the U.S. and Europe is to overcome their self-constructed perception that is highly racial and exclusionary. Furthermore, the post-colonial, neoliberal economic and political order that manipulated the south to keep natural resources and capital flow to the north is the real cause behind the massive immigration to the U.S. and Europe. A piecemeal approach and building walls will not address the systemic and post-colonial nature of the problem, but doubtful if the rising tides of the right in both Europe and the U.S. are able to see beyond their racial and xenophobic lens.
Lastly, the remedy for neoliberal economics and massive deregulations will not stop or end the changes underway, for the problems are structural in nature.

In certain historical terms the Chinese economic ascendency brings to an end the post-1492 world order that had the U.S. and Europe as the political, social, economic, racial and epistemological center for the globe. And what we are witnessing is early birth pangs of a new world order that is multipolar, racially and epistemologically diverse and no longer centered in the global north. Not to imply an easy ride moving forward, the multi-polar world may be disrupted as merchants of death might interfere to keep the old racist, exclusionary and violence-centered world afloat, but it is up to all concerned to work to make the new, diverse and inclusive world a reality.