Denying or protesting against reality does not make it disappear 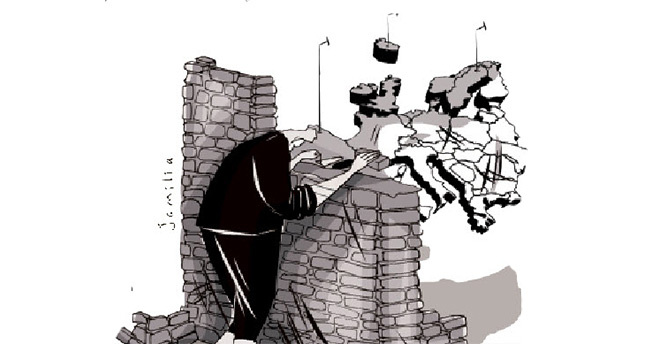 Declining economies in Europe have led far-right parties to rise in power. This has raised concern among Muslims and immigrants in many European countries since these parties form their political agenda on exclusivist policies with anti-Islam and anti-immigration rhetoric

As the economies of European countries are stalling or shrinking, anxiety seems to be getting the better of people, and has led to a rise in popularity of far-right groups and parties. Election results in many European countries show that parties that oppose immigration or introduce plans to implement better immigration controls are doing much better, while more tolerant parties are struggling to maintain their more welcoming position, and seem to be adopting a similar stance in light of the public's rising reaction to immigration.

Opposition to immigration is not only limited to immigrants from outside the EU, but also those from less-advanced EU countries such as Poland, Bulgaria and Romania, who do not find a warm welcome on their arrival in other member-states either. Anti-immigration sentiment has risen to such an extent that wealthier EU countries such as the U.K. are debating radical immigration reforms such as banning EU migrants from claiming social benefits for the first four years after entry into the U.K., and the obligation of finding employment within six months of arrival or face removal.

The recent anti-immigration protests in Germany and attacks on Muslim property in some other European countries could partly be read in the context of this general unwelcoming atmosphere for immigrants in light of Europe's deteriorating economies, but the protests in Dresden differ significantly because they were organized in opposition to Europe's Islamization. This, of course, is alarming, and raises concerns as to whether this movement could spread to other countries, creating a hostile atmosphere for European Muslims. Looking at the protests from a socio-psychological viewpoint, the concerns around the Islamization of Europe might be understandable, however the question that needs to be asked is whether Muslim communities or Islam are to be blamed for this. Could Islam be blamed for more Europeans' conversion to Islam? How should we interpret this? Is it because the current faiths in Europe are failing to keep people away from Islam, or is it because Islam is offering what other faith systems are failing to offer, or are there other factors?

Is it fair and reasonable to accuse Islam for the immigration of Muslims from their home countries to Europe? How should we read Europe's need for a young workforce, and its subsequent recruitment of foreign workers en masse at times? Is this because birth rates have been and remain a significant issue due to people wanting to lead a life without the responsibility of raising children, or is it because foreign labor is a much cheaper option? On the other hand, there is a substantial number of Muslims who had to seek refuge in Europe due to their war-torn, or financially exploited countries. These people left their countries because they were destitute, rather than wanting to act as missionaries to spread Islam in Europe.

Without taking these facts into consideration and answering the above mentioned questions, and perhaps many more, how reasonable is it to make an issue out of the belief of people who have come over to support European economies or left their country due to safety reasons. In countries like Germany, we are now talking about the fourth generation children of immigrants from Turkey who are equal citizens and contributing members of Germany society. Would these people who have long become realities of European societies and as such, see European countries as their homeland, leave Europe just because some far-right people does not like the multi-faith structure of their country?

Dismissing all this brings up the issues of "tolerance" and "integration," which are buzzwords in Europe. Many people attribute an immense amount of value to the word "integration." Immigrants have rightly been expected to integrate into the societies they live in, but at times some may over-attribute meaning to this word, expecting people to strip themselves of their beliefs, culture and values completely. This is not possible, as people tend to become more protective of their identity when they are a minority in a country. Also, during the encounter of any social groups, the interaction is not one-way but, mutual, leaving both groups exposed to each other's values, beliefs and differences. Dismissing this, and solely expecting immigrants to adopt the values and beliefs of the countries they live in is unrealistic and imposing.

Despite the atrocities of entities such as the Islamic State of Iraq and al-Sham (ISIS), which makes a special effort to broadcast their most cruel acts in return for acquisition of hatred against Islam, the fact that thousands of people gathered in Dresden to oppose the Islamization of Europe is puzzling. Currently there appears to be no other faith that is vilified as systemically as Islam. No other faith has the bad name that Islam has. Many violent events happening around the world are attributed to Islam. Given all this and taking the protests in Dresden into account, does it mean that all propaganda is failing? Or is Islam so powerful that nothing is enough to prevent its progress?

We all know that the more a value is condemned or prohibited, the more it becomes intriguing. Especially the fact that Islam is the only faith that is being opposed in rallies around the world could intrigue people more as to why Islam never falls off the agenda, potentially rendering anti-Islam protests counter-effective.