Peshawar massacre seems to be a game changer 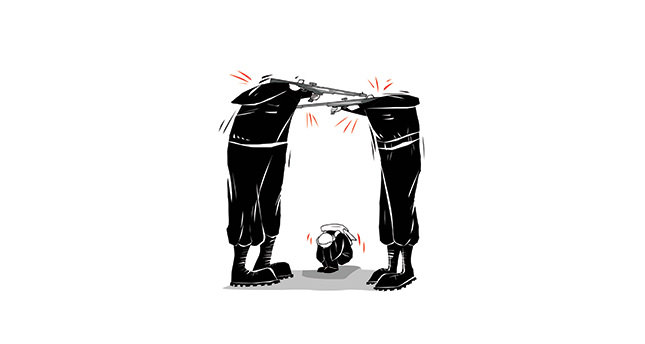 by Jehan Sher Yusufzai Jan 03, 2015 12:00 am
Peshawar in Pakistan was said to be a city of "flowers" in the past, but now it is a city of death, bombings and suicides. This unfortunate city has seen numerous terror events in the past, but the massacre of 148 people, including 132 students, at the Army Public School and Degree College has plunged the city into new gloom. It was a chilly morning on Dec. 16 when seven terrorists affiliated with the Mullah Fazlullah group of the Tehreek-e Taliban Pakistan, or Pakistani Taliban, entered the school by scaling the rear boundary wall. They started indiscriminately firing on ninth and tenth-grade students who were undertaking first-aid medical training in the auditorium, which was organized by military doctors. To escape the spray of bullets, students tried to hide under their desks, but the militants did not spare them and shot them dead.

Army commandos arrived at the spot within 15 minutes, the area was cordoned off, and all the terrorists were killed within three hours.

The situation was unbearable. The entire city was tense and angry. Grief-stricken parents were searching for their loved ones in hospitals. It is heart wrenching when mothers send their children to school and then receive them back in coffins. Later, a Pakistani Taliban spokesman confirmed the barbarous assault on the school by saying that it was revenge for the Zarb-e Azb operation of the Pakistani army in Waziristan.

Prime Minister Nawaz Sharif arrived in Peshawar soon after the incident and supervised the operation. Three days of mourning was declared in the country. The incident shook the whole world. Turkey, which enjoys brotherly relations with Pakistan, declared a day of mourning for the Peshawar carnage, which was shared by Pakistanis on Facebook.

The Organization of Islamic Cooperation (OIC) has planned a meeting in Peshawar in order to develop a comprehensive strategy for combating terrorism. Sartaj Aziz, advisor to the prime minister for foreign affairs, has termed the 12/16 event, as the 9/11 of Pakistan. It has brought all political parties onto the same page. On the second day after the heinous act, the prime minister called a meeting of all political parties in Peshawar where politicians called for stricter action against terrorist groups. Pakistan Tehreek-e Insaf chief Imran Khan, who was called Taliban Khan, has also called for stern action against the Taliban.

A National Action Plan Committee has been formed to devise a new anti-terrorism strategy. Sharif has lifted the moratorium on the death penalty for terrorism cases, and so far eight terrorists have been hanged. The president has rejected mercy appeals for 500 terrorists on death row in various prisons. Also, there are proposals for establishing a quick response force and three military-run tribunals in the tribal belt for terrorists' trials. On the second day after the massacre, Pakistan Army Chief of Staff General Raheel Sharif visited Afghanistan where he met Afghan President Ashraf Ghani and Chief of the Afghan National Army General Sher Muhammad Karimi. They discussed coordinated efforts to destroy militant sanctuaries on both sides of the border. Responding to the issue, Commander of International Security Assistance Force John Cambell, and General Karimi visited Rawalpindi Army Headquarters on Tuesday where they discussed a joint strategy to combat terrorism.

There was mixed public response to the tragedy. Some people rapped the dual policy of the government toward terrorism and others said it took place because of the government's lenient policy toward terrorists. The government exhibits a discriminatory policy toward extremists and terrorists. Some organizations, such as Lashkar-e-Taiba and it political wing Jamaat-ud-Dawa, which are involved in various heinous acts, are given free reign in Punjab province, while others are targeted.

Following the assault, the country is in the grip of conflicting speculations. Some experts are of the view that General Raheel was handed a new task during his recent visit to the U.S. in order to accomplish the remaining work in Afghanistan. The terror-stricken Pashtun community is of the view that it is a foreign war imposed on them and brought into the country by Pakistani former prime minister, General Pervez Musharraf, from Afghanistan in 2002. Why is Pakistan a frontline state, and if it is not Pakistan's war, then why is it being fought there? The war has so far claimed 45,000 lives in Khyber Pakhtunkhwa. Another school of thought says it is a proxy war being fought on Pashtun soil between India and Pakistan. Pakistan shares a lawless border with Afghanistan of more than 24,000 kilometers. The power of the Afghan government is restricted to a few cities. For permanent peace in the region, the world community is urged to resolve the Afghan issue first. Second, the roots of terrorism have spread to all Central Asian states and we cannot overcome militancy by only using brute force. The situation in the country is going from bad to worse. The Taliban are trained in mountain warfare, so I do not think our forces could easily beat them if they enter Afghanistan. To eliminate the menace of terrorism we should build an indigenous policy and Muslim-oriented approach.