Spiral of fear and hatred 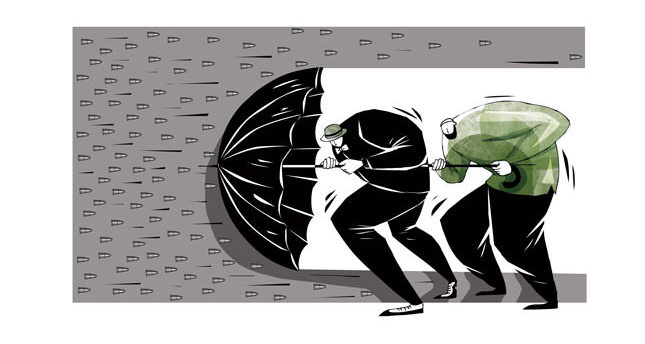 by Gülay Göktürk Jan 16, 2015 12:00 am
It was always talked about but now it has become a reality - frantic children of the Muslim world living next door to Europeans. They shop at the same market, hang out in the same cafe. Savagery and brutality had already threatened them when they lived in distant lands hard to spot on a map, in unknown cities and towns. When you could not bear it, you could stop the beheading videos in the middle. But there is no such option now. European-born radical youths who had gone to fight for ISIS became professional killers and returned to their countries with their scimitars! ISIS, al-Qaida and whatever other name they have, are right in the middle of Paris, London, Amsterdam and Copenhagen.

Europe trembles with fear. Would this fear help to put an end to the current blindness? Can the Western public break free from the spiral of fear and hatred, and begin a serious discussion about how it has come to this, and how it can save itself from this calamity?

Can the Western mind see now that the problems stem not from religion, but from the lives being lived, that as long as the world is full of so much injustice, that this rage will not subside, and that such a buildup of anger will inevitably produce crazed butchers?

Will it dawn upon the West that no one will have peace in this world unless a more just world and a fairer legal order are ensured? The Sept. 11, 2001 attacks have not brought about such an outcome. Nor did the Boston Marathon bombings. Will the Paris attacks produce such an outcome? I'm not optimistic at all.

Believing in the historicity of religions, neither do I consider views such as "returning to the essence of Islam, or explaining Islam correctly" as the solution to the violence emanating from the Islamic world, nor do I think the problem is with Islam itself.

Doctrinally, not only Islam, but no other religion allows violence, brutality, and cruelty. Otherwise, such a religion would not become a major faith with billions of adherents. But it is equally true that no religion is lived in full accordance with its holy book. Every society lives its religion to the extent "permitted" (or made possible) by its history, culture, sociology and economy.

Sometimes I think that if history had taken a different turn, and if Christianity had become the dominant religion in today's Muslim lands; if these lands had been rough-handled, divided, split up, ensnared, exploited to the bone by "the Muslim West" throughout history, and remained poor and ignorant; if the people of these lands had been prevented from mobilizing their internal dynamics and following their own will, then today we would be talking about Christian fundamentalists running wild across the region and the world. And probably some would have claimed that it is Christianity itself that created this "quagmire"!