The crisis of liberal values 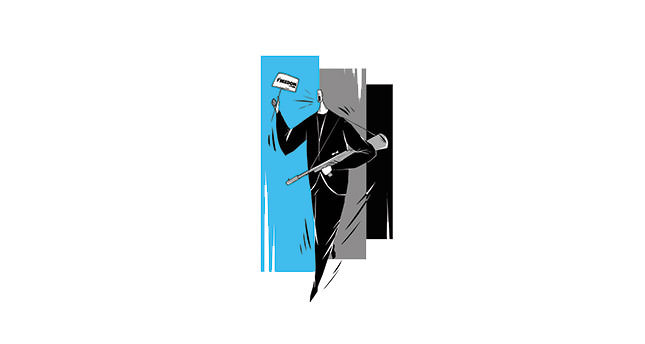 The U.S. invasion of Afghanistan and Iraq with countless massacres perpetrated in these lands have left their mark on the collective memories of Muslims. Therefore, Muslims see the West’s growing hypocrisy in its outcries of freedom and equality

As the dust begins to settle following the social media storm with condemnations under the hashtags "JeSuisCharlie" and "KillAllMuslims" trending on Twitter, public debates and countless commentaries, the exploitation of these events by, and the political predilections of Western governments, politicians and leaders have resumed. We can now say publicly what many people were saying privately before. That is, it comes as no surprise that we continue to witness the incompetent consistency and moral hypocrisy of the West.

In the same country where millions took to the streets for liberty, equality and fraternity, women are fined and imprisoned for wearing a religious item of clothing like the niqab, a full face veil, and citizens can no longer organize free demonstrations in support of the occupied Palestinian territories. Is this the same country that promotes the protection of freedom of speech and expression? Where is the condemnation for the attacks on French mosques? Where is the condemnation for the pregnant woman who was attacked in a Paris suburb because of her faith, consequently losing her unborn child? In Britain, Muslims do not have the same legal protection from insult and/or abuse as the black, Jewish or Sikh community.

In addition, the fear mongering and criminalization of Muslims has reached charitable organizations, schools and aid workers. In an attempt by Prime Minister David Cameron of the U.K. to tackle extremism and appeal to Muslims to be more British and encourage British values, Islamic faith schools have been forced to close down, charities working in conflict areas have had their bank accounts frozen, and aid workers travelling from Syria risk having their citizenship revoked and extradited without charge. Is this not an infringement on civil liberties? Elsewhere across Europe and the U.S., a growing trend in anti-Islam hate-speech, assaults and discrimination against Muslims are on the rise and cases of Islamophobia are expected to increase.

Thousands of prisoners are held at Guantanamo Bay without charge and are held hostage for crimes that cannot be brought to court. The publication of the CIA's Detention and Interrogation Program had shocking stories of detainees being tortured, abused and oppressed. U.S. drone strikes have killed more civilians in Afghanistan, Pakistan and Yemen than targets, and the human cost has reached the thousands with many women and children dead, putting American lives "less at risk." The illegal U.S. invasions of Iraq and Afghanistan have left the region reaping the destruction and ruin of basic human rights. These horrific and dreadful ordeals have all but eroded Washington, London and Paris's illusion of winning the hearts and minds of Muslims through freedom and liberty, as Syria becomes the 14th Muslim-majority country the U.S. has bombed, killing millions of Muslims, since the 1980s.

During the summer of 2014, Israel killed 17 journalists and over 2,000 civilians in Gaza, yet Israeli Prime Minister Benjamin Netanyahu marched in Paris against terrorism, assuring freedom of speech is a basic right. No case was brought to court, no hearing was undertaken and no act of solidarity or unity march from world leaders was held for a single Gazan. Needless to say, the failed Palestinian bid for statehood at the U.N. reflected the hypocritical, ineffective, inefficient, senseless "dis-United" Nations Security Council that protects the interest of governments who form it, rather than the citizens of those nations. Despite international civil society continuing to lobby, protest, sign petitions, raise awareness, boycott, debate and demonstrate in the name of civil liberties and true democratic beliefs, it is a bitter and shameful reality to say that regardless of the level of international support, the world is governed by five states, the P5, made up of the U.K., U.S., France, Russia and China.

More so, as the international community continues to give Syria the cold shoulder, the number of casualties has surpassed 200,000 men, women and children, despite the U.N. re-affirming that the regime of President Bashar Assad is still using chemical weapons. Where is the mass call for solidarity, liberty and freedom, or is that not an incentive for Western policies? For decades, Western governments have supported despotic leaders in the Middle East as a means of fulfilling their national interests and geo-political strategies, imprisoning and removing anyone who stood in their way. Since the birth of the Arab spring, we have seen Western-backed dictators walk free and journalists, activists and elected officials imprisoned.

So it begs the question, where are the consistent principles of freedom of speech and liberties? One cannot but consider a tendency across the globe where Muslims are having their liberal freedoms censored, marginalized and demonized by the very governments that ostensibly, it appears, celebrate liberal democratic values.