PEGIDA’S influence in the Balkans 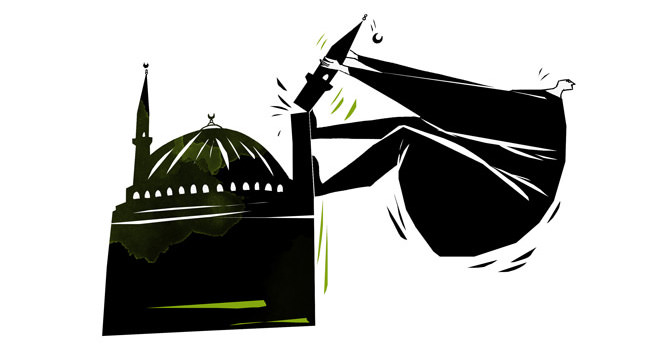 PEGIDA is a political organization that bases its agenda on anti-Islamic and anti-immigration rhetoric. Now it is really worrying to see how the movement gradually started to draw sympathy from the Balkans in the wake of its growing influence in Germany

The spread of the Patriotic Europeans Against the Islamization of the West (PEGIDA), has caught political circles in Europe unprepared. To date, the movement has opened a U.K. Facebook page and has held rallies in Germany and Denmark while the movement spreads its tentacles throughout Europe. PEGIDA has supporters even in the U.S., where anti-Muslim bigots like Pamela Geller and Robert Spencer incessantly host Islamophobic protests, run ads and publish articles filled with lies and hate. While Jewish and Muslim groups as well as the German government have condemned PEGIDA's rise in Western Europe, the movement seems to have gained traction in an unlikely place - the Balkans.

The main messages spread by PEGIDA in Germany and the rest of Europe are that the continent is being Islamized and there is a nefarious Islamic agenda is being propagated by Muslims who are close to destroying the values of Europe. The movement, which depicts itself as the "defender of European civilization," goes as far as to claim that it will protect Europe from Islam. Though the movement claims to not be anti-immigrant or anti-foreigner, it targets Muslims and Islam and wants them out of Europe.

The millenarianism of PEGIDA, which targets Muslims in Western Europe and seeks to characterize them as unwanted foreigners to the lands of European civilization and portrays Islam as an evil religion, is not new, but an old trope peddled by various groups in southeastern Europe, most recently during the wars of Yugoslavia in the 1990s. Many Serbian and Croatian groups justified their massacres and rapes of their Muslim neighbors as a Christian war against Islam. Even today, almost two decades after the Yugoslavian wars, many Christian fundamentalist groups in the Balkans share PEGIDA's ideology. While Muslims and Islam are centuries old in this part of Europe, many Christian, and what can only be described as "secular fundamentalists," are using the continuing "war on terror" as a tool to legitimize their attacks on local Muslim communities. Muslims are described as savages, potential terrorists, Wahabis or, most absurdly, ex-Christians who must convert back to their previous religion. Meanwhile, political Islam is depicted as a threat to national security. Anti-Muslim fundamentalists demand limits be placed on the rights and freedoms of Muslim communities and, if possible, their conversion to Christianity.

Most of the blame that Islam takes nowadays in the Balkans is connected to Turkey and the Syrian jihad. The myth of the Ottoman Empire with its past Islamic domination over southeastern Europe is used time and again by Christian fundamentalists to justify their attacks against Muslim communities. When the Charlie Hebdo offices were attacked in Paris a few weeks ago, Albania's most vitriolic Islamophobe, writer Ismail Kadare, compared the terrorist attacks on the French journalists in Paris with the Ottoman and Soviet invasions of Europe in the 15th and 20th centuries.

The idea that Islam, Turkey and Arabs are conspiring to "invade the Balkans," to destroy Christianity, convert the remaining Christians to Islam, cover women with the burka and separate them from Europe may sound absurd to a rationale mind, though such ideas persist among many Albanian fundamentalists in Kosovo and Albania. While in Albania some leading Islamophobes who propagate Islamic conspiracies and threats behind Turkey's new role in the region and the revival of Islam are friends of Albania's current prime minister, like Ben Blushi, Maks Velo and Piro Misha, in Kosovo the new "pope" of anti-Muslim bigotry is Alma Lama. However, she is not alone. Leading politicians in Kosovo, like the suspected war criminal Ramush Haradinaj, are joined by a panoply of other actors and journalists sponsored by organizations such as the Open Society Foundation, Robert Bosch Stiftung and the ERSTE Foundation. We are thinking here of people like Arbana Xharra, a well-known journalist who does not shy away from publicly calling Kosovo Muslims filthy. However, Lama is one of the most outstanding extremists and, unsurprisingly, her activities are praised by American neo-con Islam bashers such as Stephen Suleyman Schwartz.

Lama moved to Kosovo from Albania and currently serves as deputy for the ruling Democratic League of Kosovo. She is one of the main PEGIDA-like crusaders attacking Islam in Kosovo. Through her media declarations, Facebook postings and other activities that are both enthusiastically promoted and supported by fanatic Catholic Albanians living in Kosovo and Europe, she has generated much controversy over the past years.

Like PEGIDA, which perceives Muslims and Islam as invaders, in her controversial remarks she also labels Muslims in Kosovo "Arabs" and "Wahabis" who do not belong to Kosovo, but "Arabia." This is what she did when she attacked Arian Agushi, a Kosovar rapper who defends Islam in his songs. Lama has also called Kosovo's imams "ignorant" and "idiots." She insults the Bektashis, calling them "Arabs" when they celebrate the Muslim new year and attacks the chief mufti of Kosovo and its ministers as neo-Ottoman conspirators when they receive official delegations from Turkey. She once threatened to sue all the media of Kosovo if they published a song by an Albanian rapper who insulted her in response to her insults of Islam. In her parliamentary deliveries, she portrays Muslims as enemies of democracy and human rights who misuse "our freedoms to ambush us, who attack the foundations of our culture, on behalf of other cultures ..."

Like the German demonstrators of PEGIDA, Lama imagines Kosovo to be an ancient Christian and European land that was violently Islamized by "the Turks." In one of her attacks of minister Ferid Agani, who happens to be a practicing Muslim, she accused him of being a conspirator who wanted to separate Kosovo from Europe, return it to the medieval ages and transform it into "an Arabia ... like Saudi Arabia where women are considered to be inferior human beings and are sold and bought at will." In 2010, when around 10,000 Muslims protested in Pristina demanding the government allow hijab-clad girls the right to public education, she attacked the protesters as those who indoctrinated and manipulated women. She both denied the women any agency to make their own choices and even accused those who wear the hijab as doing it for money given to them by "the Arabs." These shameless assaults are intended to give the impression that Muslims in Kosovo practice their religion not out of personal conviction, but because they are paid to do so. Like Lutz Bachmann, the former head of Germany's PEGIDA movement who was photographed posing as Hitler, Lama depicts Albanians as "pure Christian Europeans" and praises Albanian Nazi collaborators. In one of her Facebook posts she praised the traitor Albanian politician Ali Kelcyra for his remarks against Islam and Orthodox Christianity. Kelcyra, who was educated in fascist Italy, described Islam and Orthodox Christianity as the two heads of a beast that fought against Albanian nationalism. Lama, who obviously believes in the myths of Greater Albania created during the era of fascist Italy, a myth which claims that Albania's original religion is Catholicism, also shares the same ideas with the Albanian Nazis of the 20th century.

The virulent insults that Islamophobes like Lama make against Albanian Muslims, Turks and Arabs has caused many controversies and raised tensions in Kosovo over the past few years. Leading Kosovar imams, parliament deputies and civil society activists have challenged Lama and other racists in the country for their remarks on Muslims and Islam. The leader of the left-leaning political movement Vetevendosje! (Self-determination), Albin Kurti, was even forced to remove Lama from the party after she attacked Kurti and his party for being "extremist," after the movement refused to vote for a law that prohibited wearing hijab in public schools in Kosovo. Gezim Kelmendi, a deputy with the Justice Party, has publicly called on state authorities to charge Lama for incitement of religious and ethnic hatred with her remarks against Islam, imams, Turkey and her depiction of practicing Kosovar Muslims as "Arabs who must go to Arabia." The Muslim Youth Forum of Kosovo has also accused Lama of inciting hatred and Islamophobia. In response to their accusations Lama's brother, Fisnik Lamaj, threatened one of the directors of the forum with rape.

While state authorities in Kosovo have done nothing to silence Lama and other Kosovar and Western-funded journalists and media hate speech against Islam, a number of Kosovar Muslims have taken to Facebook and other social media platforms to criticize and sometimes even insult these Islamophobes. The police have arrested and sentenced a few of these individuals for their so-called "threats" against Lama, but no action has been taken against Lama or her brother for their insulting remarks and blatant blackmail.

Unlike in Germany where the government has shown vigilance and expended much energy to discredit the PEGIDA phenomenon and the incitement to Islamophobia, in Kosovo it is another story entirely as the current government has done nothing against its PEGIDA-like Islam haters. The government of Kosovo wants to convince the West that it is "more Catholic than the pope," and for this reason it has continuously tolerated and even supported PEGIDA-like sympathizers who preach hate against Muslims and Islam. All the while the government has initiated a mass arrest of many innocent Muslim believers and imams and closed dozen of Muslim civil society organizations in order to appease NATO and the West and show that it is also doing its part in the war against the Islamic State or Iraq and al-Sham (ISIS). The presence of the EU in Kosovo, the Organization for Security and Cooperation in Europe and other international organizations that are very much aware of what is going on in Kosovo nowadays have remained silent on the fact of Muslim-bashing by people like Lama or the discrimination meted out against countless Muslims in the country. Their inaction in preventing the rising tide of Islamophobia in Kosovo leads one to believe that many leading Western politicians and organizations support the message coming from fascist groups like PEGIDA, which depict Muslims and Islam as an evil that must be eradicated from Europe. It seems that they are not able to separate Islam from terrorism. By contrast, the German government's response against PEGIDA has been outstanding. I hope that the German government will not limit its fight against the hateful message of PEGIDA in Germany alone, but will also advise the rest of the states of the Council of Europe that the fight against racism and Islamophobia is a duty for all of Europe, and terrorism cannot be fought with fascism.