Euro-Islam: Beyond a paradigm of fear 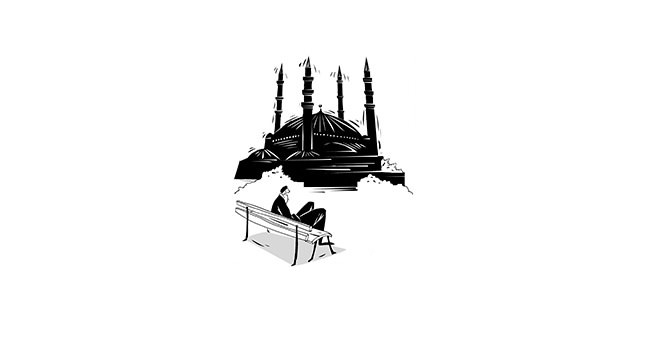 by Elshad Iskandarov Feb 03, 2015 12:00 am
The bloody terrorist attack on Charlie Hebdo has brought the issue of Europe's relation with Islam – and its particular facet of "Euro-Islam" – to the fore both in Europe and worldwide. In fact, this issue is part of the greater paradigm of interaction between civilizations - the issue of Europe as the core of the West in opposition to Islamic civilizations, has been the focus of word attention since 9/11, and has just recently been over-taken by the unfolding crisis in Ukraine. All major events of the last 15 years, whether the U.S. invasion of Iraq or Afghanistan, the rise of the Justice and Development Party (AK Party) to power in Turkey or the Arab Spring and its aftermath of bloodshed in Syria and Iraq, have been viewed through the lens of their relevance to Europe and Europe's approach to its own Muslim minority. The dominating European perspective has highlighted the rise of violent Islamism, and has always, implicitly or explicitly, concentrated on the question of if or when this "Islamic threat" would take over Europe. Paraphrasing Karl Marx, the last 15 years have been marked by the "specter of Islamism haunting Europe." It would not be an exaggeration to say that, unfortunately, Europe's general public perception of Islam and its Muslim citizens is developing along a paradigm of fear that constitutes the basis of rising Islamophobia. This paradigm consists of three critical elements.

The paradigm of fear

The narrative behind Islamophobia firstly maintains that the Muslim population of Europe is rising quickly. Given the aging and declining curve of non-Muslim Europeans, the view is that in a few decades the proponents of Islam will constitute the majority of the European population. An Ipsos-Mori poll in 2014 found that on average, French respondents thought 31 percent of their compatriots were Muslim, in Germany a similar public perception pointed to 19 percent, and most Britons think that every fifth inhabitant of the U.K. is a follower of Islam.

The second element of the paradigm of fear is that the majority of European Muslims do not accept European values, rejecting the core of the basics of European society such as democracy, human rights and religious tolerance. This view points out that even second and third generation Muslim immigrants despise principles such as women's emancipation and, given the opportunity, will impose their lifestyle on the rest of society. The image of a Muslim man being followed by four wives in full covering – in Europe called burkas – has become the most popular sign of such a perception.

The third facet of this perception holds that in pursuit of their ideological views, Muslims heavily rely on violent means. As one commentator summarized, "Though not all Muslims are terrorists, all terrorists are Muslims." These perceptions have combined to create a paradigm of collective fear based on an image of a "massive and immediate threat," created by the advance of Muslims, to the very existence of Europe as it has been known since the Renaissance.

Perceptions are not reality

Are these perceptions based on reality? Taking a closer look at the facts on the ground, one finds a completely different picture from the one believed to be true by Europeans.

The number of Muslims has indeed grown in Europe, but they are not even close to the figures of popular perception. According to the Pew Research Center study, the Future of the Global Muslim Population, the number of Muslims in E.U. countries has risen from 4.1 percent in 1990 to merely six percent in 2010. In France, for instance, the actual size of the Muslim population is 7.5 percent, or four times less than that of public perception. In Germany, 5.8 percent – more than three times less – and in the U.K., 4.8 percent at more than four times less. Even given the current demographic trend, in 2030 the total Muslim population of Europe is expected to be about eight percent of the continent's overall population. These figures hardly indicate that Muslims will be overtaking Europe in numbers anytime soon

The same trend is also true when it comes to the perception of the extent of Muslims' integration in European societies. Thus, 44 percent of French Muslims put their French identity first, followed by their ethnicity and only then their religious identity. Moreover, seven in ten French Muslims, or 72 percent, perceive no natural conflict between being a devout Muslim and living in a modern society, a view shared by a virtually identical 74 percent of France's general public.

Finally, the most gruesome image of the Islamopobic paradigm is expressed by the phrase: "Not all Muslims are terrorists, but all terrorists are Muslims." Contrary to this public perception, Europol – the European equivalent of Interpol – data reveals that in 2013, there were 152 terrorist attacks in the E.U., and only two of them were "religiously motivated" – read: perpetrated by Islamists. In 2012, six out of a total of 219 terrorist attacks were "religiously motivated." Overall, the same records show that in fact, in the last five years, less than two percent of all terrorist attacks in the E.U. were executed by so-called "Islamist terrorists."

So, while the facts on the ground tell a different story, why is the paradigm of Euro-Islam being dominated by a canvas of phobias of Islam as a faith and Muslims as its followers? As all the above figures draw a disparity between facts on the ground and public perception, there must exist a conscious manipulation behind the spreading of phobia about Islam and Muslims. This idea brings us to the issue of who is behind this manipulation or, as the ancient Romans would have put it," cui bono"?, or for whose benefit? In responding to this question, it is hard not to notice a connection between "the paradigm of fear" and the rise of far-right racist political forces in Europe.

The rise of Europe's "new far right" began long before the notorious Charlie Hebdo attacks, and gained momentum with the deepening of the 2008 economic crisis. While high unemployment across the continent is one force fueling this new far right advance, anti-immigrant anger and racist perceptions are another important drive that helps the new far-right march across Europe. However, it was last year's European Parliament (EP) elections that demonstrated how far the fueling of Islamophobic sentiments can propel the political strength of the new far right.

From traditional far-right parties winning as much as 25 percent of the national EP vote, such as (Marine Le Pen's National Front, to 28 percent, such as the U.K. Independence Party (UKIP), to some genuinely fascist elements, notably Jobbik the Movement for a Better Hungary and Golden Dawn, who, for the first time took seats in the new EP – Europe's far right has become the prime beneficiary of phobias directed towards "Others." To be fair, this anti-minority sentiment does not only target Muslims. The main targets of Hungary's Jobbik are Romas and in the Netherlands, Geert Wilders, known for his notorious attacks on Islam, marginalizes Polish immigrants as well. But because of its size and cultural "otherness," the Muslim minority is the first victim of electoral policies of fear, and Islamophobia is the main drive for new far-right power.

Is there light in the end of the tunnel?

The reaction to the tragedy at Charlie Hebdo has revealed nuances that have not received the analyses they deserve. While far-right radicals used the terrorist attack to bring forth a spiral of anti-Muslim sentiment, Europe's mainstream political forces intervened for the first time with messages of unity and a need to counter both radicalism and Islamophobia. Both the Turkish Prime Minister Ahmet Davutoğlu joining the Paris march and French and German leaders' stance of "not identifying the attacks with European Muslim communities at large" has in fact demonstrated that European elites are willing to deny the far-right to solidify anti-Muslim sentiments into the mainstream of popular discontent. The call by the German Chancellor Angela Merkel, who in 2010 declared the death of multiculturalism, for unity against "anti-Muslim forces" and her statement that "Islam belongs to Germany," came as particularly surprising. But more than expressing any specific "love for Muslims" as her far-right opponents would like to put it, her moves reflect the serious concern of mainstream European parties that the divisive ideas of the contemporary far right vis-a-vis minorities, immigrants and Muslims/Islam have been crossing dangerous and multiple boundaries, and endanger the political future of the mainstream.

As spokesman for Unite Against Fascism, Weyman Bennett said, the growth of far-right networks such as "Euro-league in a time of economic crisis threatens to resurrect fascist street armies such as those that destroyed European democracies in the 1930s." He further identified the main driving force behind such a danger to democracy: "The Nazis' anti-Semitic rhetoric struck a chord of deep cultural hatred for Jewish people. Nowadays it is Muslims and overt Islamophobia." While these tendencies need to further prove the seriousness of the European mainstream's intentions to fight the ugly face of hatred of the "Other," they create momentum that is not to be missed.

As an international organization dedicated to bridge the gaps between different cultures and working for a brighter future for Muslim youth, including the youth of European Muslim minorities, the Islamic Conference Youth Forum for Dialogue and Cooperation (ICYF-DC) has both opened a call for such a platform and is undertaking concrete steps to realize the objective. In our view, the platform should be broad enough to include both political elites and civil society; media and public opinion champions should unite their efforts as Europeans of different political, religious and national backgrounds. The platform can work on a wide range of issues from the establishment of the symbolically-important European Day against Islamophobia – similar to the International Day against Fascism and Anti-Semitism – to reaching out to marginalized youth in Muslim suburbs and media activities for providing historically accurate narratives of relations between European culture and Islam.

While conscious of the gravity of the task ahead, we are eager to join hands with all concerned parties and would-be partners. International platforms like the U.N. Alliance of Civilizations, which was established to fight prejudices and misconceptions; brave intellectuals like Luc Besson, who in the aftermath of the Paris attacks, expressed willingness to reach out and work together with France's marginalized Muslim community; companies like Volkswagen, which turned off the illumination of its glassy Transparent Factory in Dresden in protest of the Patriotic Europeans Against the Islamization of the West's (PEGIDA) fascist marches can all be part of such a platform. All who are concerned with the future of Europe and, most importantly, the future of the hard-gained values of civil liberties, tolerance and mutual respect. All those who uphold the true meaning of the great European Enlightenment thinker Volter's statement: "Those who can make you believe absurdities can make you commit atrocities."

* Ambassador, President of the Islamic Conference Youth Forum for Dialogue and Cooperation, an affiliated institution to the OIC
Last Update: Feb 03, 2015 1:12 am
RELATED TOPICS