2 existential questions for Turkey: Stance of Erdoğan and opposition 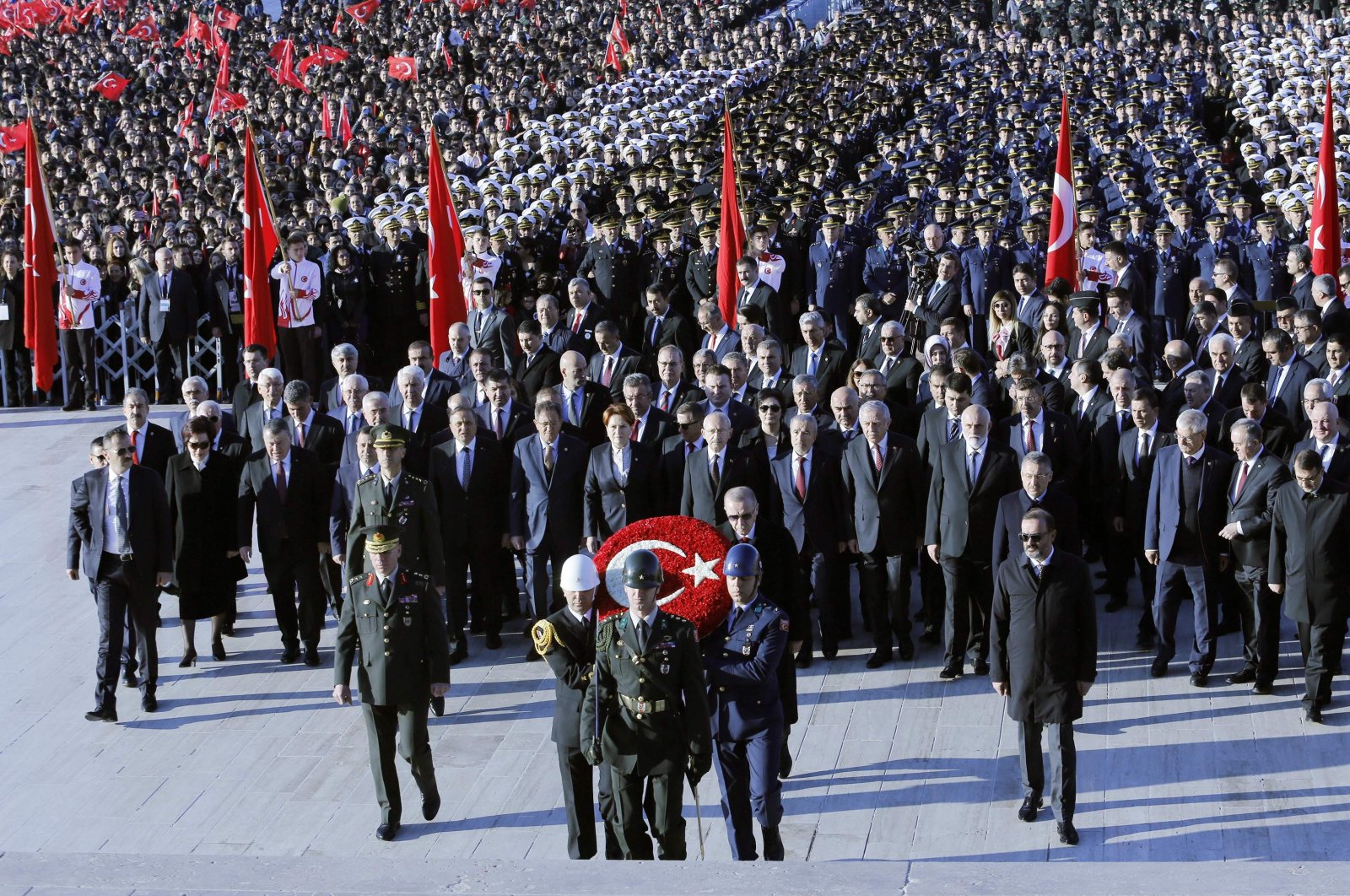 President Recep Tayyip Erdoğan, members of the government, opposition leaders and other officials attend a ceremony commemorating the 81st anniversary of the death of Turkey's founder Mustafa Kemal Atatürk, at his mausoleum in capital Ankara, Nov. 10, 2019. (AFP Photo)
by Burhanettin Duran Sep 15, 2020 12:05 am
RECOMMENDED

Western media’s opposition to President Recep Tayyip Erdoğan is possibly the world’s worst kept secret. Western commentators immediately jump to conclusions about the supposedly expansionist goals of Erdoğan’s Turkey whenever Ankara launches a fresh foreign policy initiative. Experts in Washington, Paris, Athens, Abu Dhabi and elsewhere make the same arguments in an attempt to contain Turkey’s influence to an unbearable extent. At the heart of those comments lies the claim that the Turkish president has isolated his country in the international arena, which will lead the nation to a disaster and that the Turkish people deserve better.

Last week, French President Emmanuel Macron resorted to the same tactic, as he made a fictional distinction between Erdoğan and the Turkish people to target Ankara for protecting its national interests in the Eastern Mediterranean on the basis of a fair distribution of resources. Although the Frenchman proceeded to walk back his comments, Macron’s wavelength seems to be in sync with Joe Biden, the Democratic presidential candidate in the United States, who talked about removing Erdoğan from power by supporting Turkey’s opposition parties.

That narrative ran aground in the Eastern Mediterranean, as the Turkish people cannot be talked into relinquishing their rights through anti-Erdoğanism. Indeed, a spokesperson for the main opposition Republican People’s Party (CHP) was compelled to endorse Erdoğan’s policy in writing: “Foreign policy is a national matter for us. We (criticize) Erdoğan on domestic matters (alone). We support the government on this issue.” How long the CHP leadership will stick to that position remains unclear. Still, that they were forced to stress the “national” character of the Eastern Mediterranean question demonstrated the power of the emerging national consciousness in Turkey.

Efforts by Greece and its sponsors to imprison Turkey in the Gulf of Antalya emerged as a second source of existential concerns for the Turkish people – on top of the fight against the PKK/YPG terrorist group in Syria and Iraq. The country’s population increasingly experiences a sense of encirclement and denial.

Turkey’s recent discovery of natural gas in the Black Sea, an accomplishment that Turkish officials wish to repeat in the Eastern Mediterranean, reflected the positive impact of those national concerns. The country's citizens understand that they face an attack designed to deprive them of maritime jurisdiction and natural resources, which could be key to economic welfare. Again, many Turks are confident that Western governments always side with Greece against Turkey.

Both Macron’s aggressive remarks and the threat of European Union sanctions revive the memory of the War of Independence, which played a key role in the Turkish national identity’s formation. In other words, some European politicians, perhaps unwittingly, remind the Turks about an existential threat much older than PKK/YPG separatism. The Turkish people are concerned by the rearmament of formerly demilitarized islands in the Aegean Sea, the Greek threat of expanding its territorial water claims to 12 nautical miles and the possibility of Cyprus falling to Athens. They don’t care whether Turkey’s adversaries make a distinction between Erdoğan and the Turkish people.

Let us recall that the Turkish president has survived domestic and international attacks and led the democratic resistance against the July 15, 2016 coup attempt. As such, he is considered a powerful statesman that stands in the way of Turkey’s enemies merging those two existential questions. Erdoğan thus embodies self-confidence and determination, rather than worry, in Turkish politics. He also happens to be a skilled politician that turns those existential concerns into opportunities. In other words, Erdoğan carries on his shoulders the dream of a great and powerful Turkey.

Fully aware of the strength of that sentiment among voters, Turkey’s opposition parties, knowingly or not, feel the need to condemn the targeting of Erdoğan. Interestingly, the Good Party (IP), too, made a statement similar to the CHP’s remarks.

In recent weeks, not only the experts, but the whole public viewed an effort by the former pro-PKK Peoples’ Democratic Party (HDP) Chairperson Selahattin Demirtaş to invite IP Chairperson Meral Akşener to breakfast as part of an ongoing effort to incorporate the HDP into the pro-opposition Nation Alliance. Demirtaş, who did not even apologize for inciting violence and endorsing the PKK’s "trench" terror, was received cautiously by Akşener – who used the phrase “blood feud” in her response. Yavuz Ağıralioğlu, a spokesperson for the IP, also called on the HDP to distance itself from the PKK and added that the movement would not go on a “political frenzy” just to get Erdoğan to step down.

Those statements by the CHP and the IP on Erdoğan point to a deeper truth. Turkey’s opposition parties find themselves between two existential questions. Going forward, there will be no shortage of directions intended to guide opposition leaders out of that pickle.