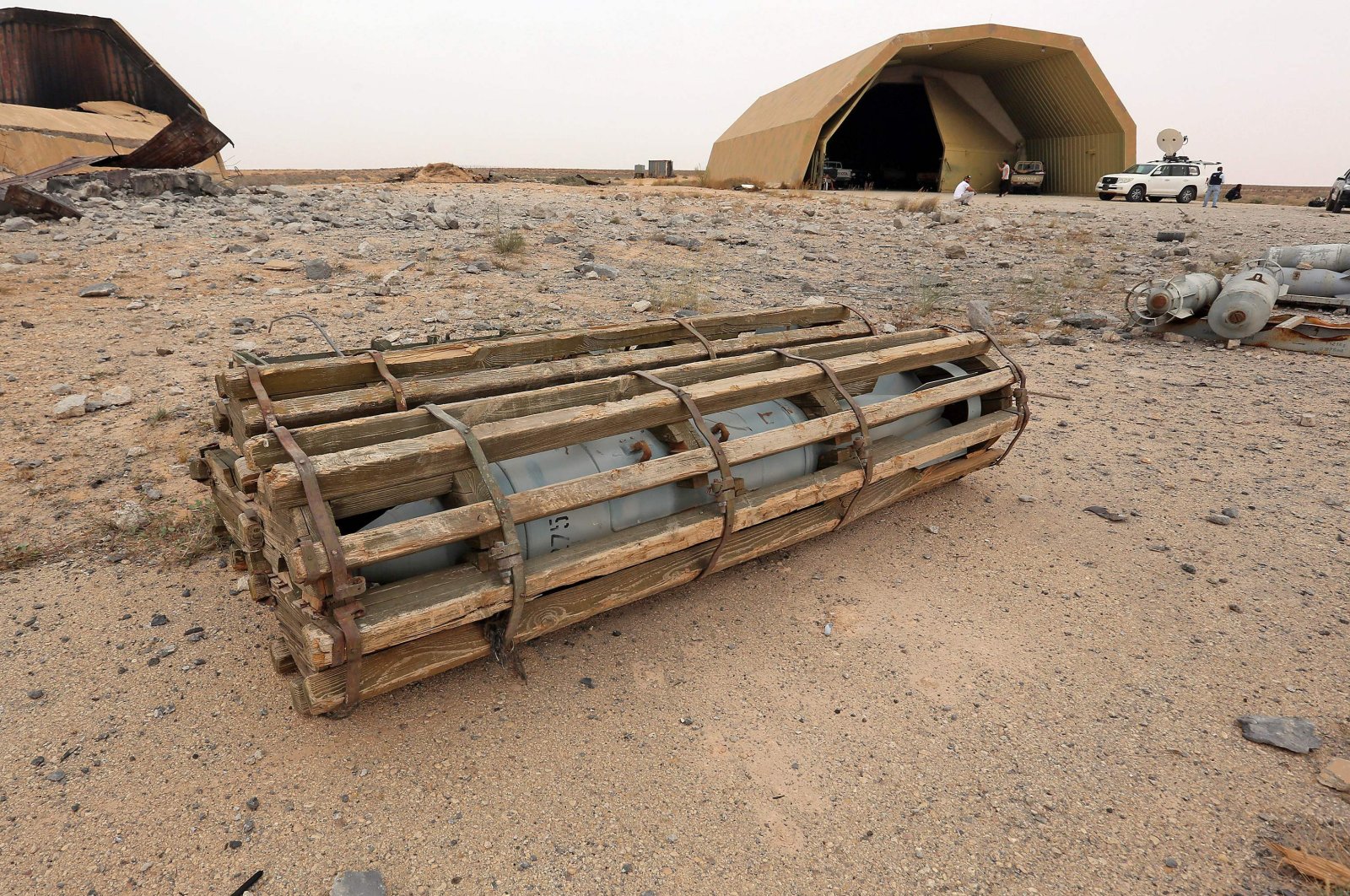 A view of a discarded aircraft-mounted explosive outside a hangar at Al-Watiya air base, southwest of the capital Tripoli, after the strategic location was seized by forces loyal to Libya's U.N.-recognized Government of National Accord (GNA), Libya, May 18, 2020. (AFP Photo)
by Muhittin Ataman May 20, 2020 12:05 am
RECOMMENDED

European countries recognize the Tripoli-based Government of National Accord (GNA) as the only legitimate representative of the Libyan state and people.

Libya's government is supported by Turkey, the only country providing the nation with weapons to fight putschist Gen. Khalifa Haftar, who is backed by many regional and global powers – such as the United Arab Emirates, Saudi Arabia, Egypt, Greece, Russia and France. Although European Union countries officially support the legitimate government of Fayez al-Sarraj, a number strongly support its illegitimate rival, Haftar, on the ground.

Haftar’s illegitimacy is not only confirmed due to his lack of U.N.-recognition; he has been violating many basic principles of human rights by targeting civilians with the support of the UAE, Saudi Arabia, Egypt, Russia, Greece and France. That is to say that a number of EU countries, such as France and Greece, have been providing diplomatic and political support to crimes against humanity committed by Haftar.

Even during the sacred month of Ramadan and despite the pressing issue of the global coronavirus crisis, Haftar's militiamen have targeted not only the country's infrastructure but also residential areas, killing women, children and the elderly. On May 9 alone, Haftar militias launched more than 80 rockets on various residential areas around Tripoli, striking Mitiga airport, damaging a number of civilian planes and killing at least six. Over the course of the first two weeks of May, more than 15 people were killed and more than 30 wounded as a result of Haftar's attacks on the greater Tripoli area. Haftar, who has been insistently violating all of the agreements achieved regarding the Libyan crisis, is responsible for the failure to act on deals made in Skhirat, Palermo, Abu Dhabi, Moscow and Berlin and has not been held responsible for all of these destabilizing moves. On the contrary, they were directly or indirectly approved of by his supporters.

President of the Libyan National Parliament Hammude Ahmed as-Sayyala sent a letter to United Nations Secretary-General Antonio Guterres condemning the silence of the U.N. and the international community toward the killings of innocent civilians by Gen. Haftar. As-Sayyala, in his letter, pointed out that as long as Haftar’s militias attack civilian regions, they will not respond to any call for negotiations. In return, with the exception of some vague words and declarations, the U.N. and international community have stopped short of condemning Haftar and his supporters. Still, as-Sayyala has called on the U.N. and the international community to punish Haftar and his supporters. Yet, so far, such calls have naturally gone unanswered.

It seems that Turkey is the only relevant actor to condemn Haftar’s attacks against civilians and human rights violations. In a written statement, the Turkish Ministry of Foreign Affairs firmly declared that Haftar's militias and positions would be targeted in case of attacks on civilian areas or Turkish positions. In the statement, the Turkish Foreign Ministry called on the international community to take responsibility and to halt violence against civilians. Turkey will continue to support the legitimate government and institutions of Libya in order to protect the Libyan people. The foreign minister of the GNA, Muhammad et-Tahir Sayyala, pointed out that Turkey had come to Libya to protect civilians. He also stated that Turkey’s existence in the country had changed the balance of power on the front.

After the GNA began to recapture certain strongholds from Haftar with the help of Turkey, the supporters of Haftar, including the Europeans, began to take measures against further gains by the GNA. As a concrete step, on March 31, the EU initiated Operation IRINI. According to the official EU explanation, the main objective of the operation is “to enforce the U.N. arms embargo and to contribute to a sustainable ceasefire in Libya.” However, when examined closely, the only visible result is the prevention of aerial and naval support to the GNA by Turkey.

The EU operation will cut off the GNA’s supply chain, creating problems in supplying weapons and ammunition. In other words, the de facto impact of Operation IRINI will be in Haftar and his supporters' favor, since it does not attempt to prevent any support from Haftar’s backers, who have been supplying weapons and ammunition across the Egyptian-Libyan border, which is under the control of Haftar.

However, some EU member countries, such as Germany and Malta, are reluctant to implement the operation.

EU countries so far have taken no action against Russia or the UAE, Haftar's two main supporters and weapon providers. Considering Russia is too big to deal with and is a primary threat to Europe, we expect that it will be quite difficult for the EU to take effective measures against it. However, the EU countries still have taken no measures against the UAE, a flimsy union of seven statelets, because of their pro-Haftar stance. Most EU members still do not want the GNA to take control of the country. This position itself is anti-Turkish, since they do not want the actor that is supported by Turkey to win the conflict and control the whole country.

France, in particular, has been contributing to attempts by Egypt, the UAE and Greece – all of which are trying to prevent any success by the GNA and its main supporter, Turkey. These four countries have been mobilizing their naval and air powers to intervene in the crisis. They have been trying to restrict a potential comprehensive Turkish air operation.

The ministers of foreign affairs of Egypt, the UAE, Greece, the Greek Cypriot Administration and France held a teleconference last week. They claimed that the delimitation agreement signed between Turkey and the legitimate government of Libya is “a violation of international law” and “an intervention to the sovereignty rights of third countries.” This declaration came after two significant developments. First, Haftar declared that he abolished the Libyan Political Agreement and declared himself president of the country. Second, Russia and the UAE have sent large amounts of weapons and ammunition to Haftar.

However, there has been at least one interesting development on the NATO front. After speaking with the U.N.-recognized representative Prime Minister Sarraj, NATO Secretary-General Jens Stoltenberg explained that the alliance would be ready to contribute to the solution of the crisis in the context of the U.N. Security Council decisions and to the restructuring of the security sector of the Libyan state. Furthermore, Stoltenberg declared that the alliance was ready to support the GNA. This explanation is diplomatically significant, but it is not clear how it might be realized on the ground since the approach of both Greece and France, who are members of the organization, toward NATO’s decision is not yet well defined. At this point, the U.S. approach is significant. It is known that ambassadors of the U.S. and the U.K., as well as the U.N. special representative for Libya, have been cooperating in diplomatic and intelligence fields.

It seems that the confusion of EU member states regarding the Libyan crisis will continue. The more territory GNA forces retake from Haftar and his militias, the more EU members will incline toward the GNA. On the other hand, the UAE, Saudi Arabia and Egypt foresee a totally different picture in Libya, yet the EU countries have no red lines. Therefore, it is relatively easier to persuade the EU member states, maybe with the exception of Greece, to support the GNA.