Coronavirus and the US presidential elections 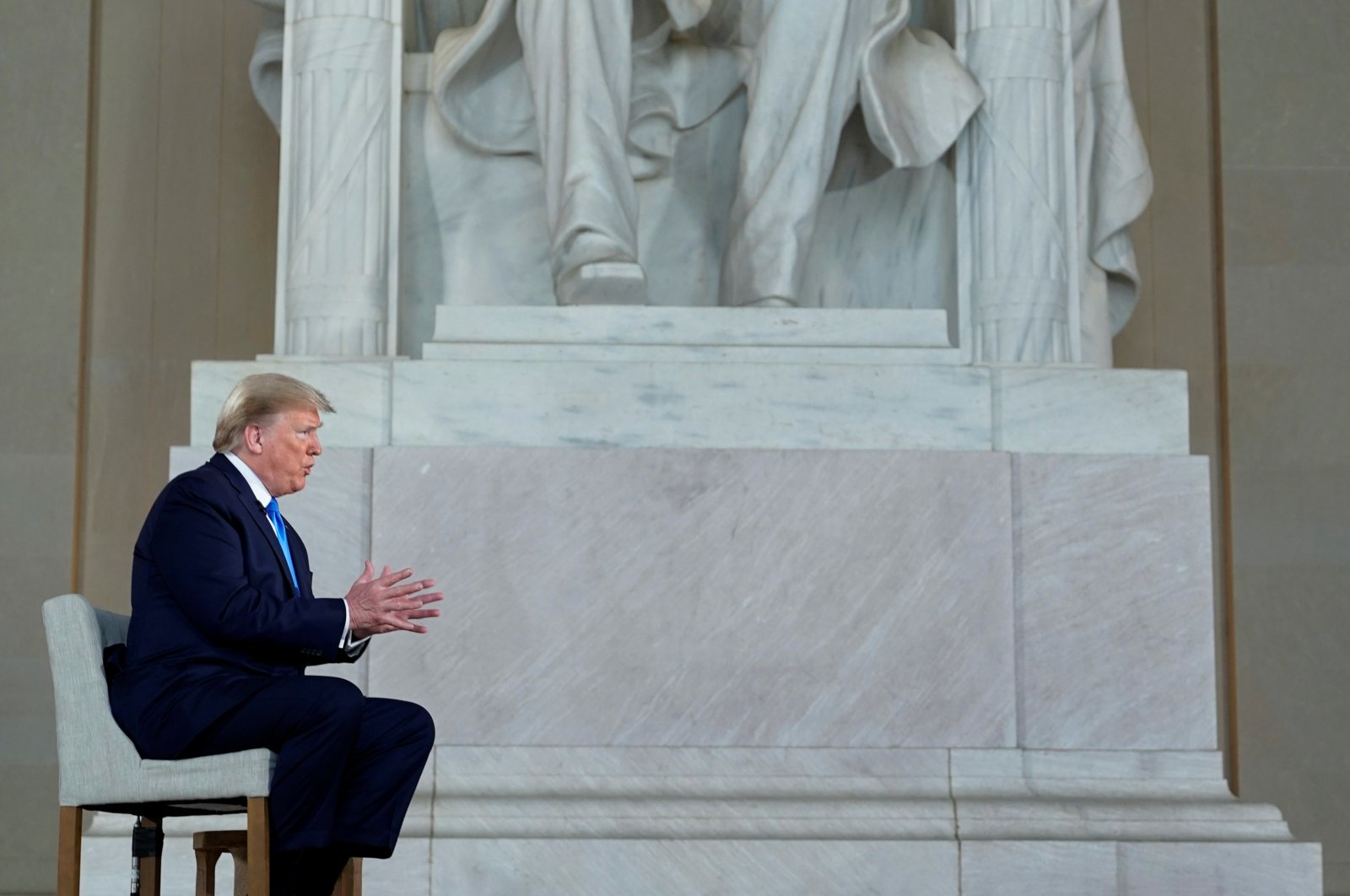 U.S. President Donald Trump participates in a live Fox News Channel virtual town hall about the response to the coronavirus pandemic, as he sits in front of the statue of former President Abraham Lincoln inside the Lincoln Memorial in Washington, D.C., U.S., May 3, 2020. (Reuters Photo)
by Kılıç Buğra Kanat
May 09, 2020 12:05 am

If the coronavirus crisis were not at the top of the public agenda, today the most significant topic would be the U.S. presidential elections, with President Donald Trump having actually launched his campaign even before the outbreak. The Democrats united around former Vice President Joe Biden shortly after the pandemic rose to a state of emergency. We can thus expect that, in an ordinary state of affairs, President Trump would be visiting states, campaigning to mobilize his grassroots supporters, attacking his Democratic opponent more directly with every passing day and trying to lower his public approval rating even before his official nomination. In terms of Democrats, we would see a more rigorous debate in regard to the vice presidential candidacy. In sum, the 2020 elections would be rather unique, with President Trump definitely bringing the matter of his impeachment process into the debate.

However, when the coronavirus outbreak emerged, everything changed. Today the presidential election is nowhere near to the top of the agenda in U.S. politics. It is right that there are still weekly polls showing levels of support for the candidates, but these are overshadowed by the numbers of infected cases and those who have lost their lives due to COVID-19. Although there have been significant improvements in New York, almost 20 states are seeing increasing numbers of patients. The main debate around this is over whether the normalization process has started to fall victim to political polarization in the country. And if the normalization process is not handled carefully, there is a real risk of a second wave of infections, which according to some scientists could turn out to be worse than the first. As of today, there are six months left until the presidential elections. That sounds longer than other elections, but for the U.S. it is a rather short period of time, considering the length of the primary process in the country. So what will be the topics that shape voter preferences in the elections?

In fact, both Trump and Biden are aware that the pandemic will serve as the most significant test for the former's presidency. In terms of domestic politics, three issues are likely to be the most significant topics for the electorate in November 2020. The first one will likely be crisis management and leadership during the coronavirus outbreak. The second issue will be the state of the economy, especially unemployment rates. Meanwhile, the third will be in regard to the state of the health care sector and system in the U.S.

Now many analysts agree that the handling of the coronavirus crisis will have a big impact on the elections. Although the extent of this impact depends on the state of the outbreak in summer and early fall, there is not much question that it will be one of the defining factors of the election campaign, especially given it will take up to three months for some of the hardest-hit areas, such as New York, to accomplish full normalization. However, after three months we can't be sure if there will be a second wave, which if combined with the flu season could place more stress on the health care system and more risk on patients. This means that it is highly likely that we will be still talking about the coronavirus in the first weeks of November. Moreover, the current number of deaths in the U.S. has surpassed the total number of Americans who lost their lives in 9/11 and the wars in Vietnam, Afghanistan and Iraq combined. As President Trump himself stated last week, it is a worse crisis than Pearl Harbor or 9/11.

Estimates show that by the end of August, the number of people set to lose their lives could reach up to 130,000, a number higher than the sum of all war casualties since World War II. In addition to those who die and those who contract the illness, there will also be an element of fear and anxiety. People are worried and expect some ease to their concerns. Considering the fact that it is not very likely we will have a vaccine by then, we can assume that there will be a continuation of concern over the pandemic. Thus, the issue of Trump’s performance addressing the crisis will be one of the most significant topics in the elections. Foreseeing this, President Trump started to change his discourse about the disease. Unlike remarks he made in January and February, nowadays Trump is more attentive and more alarmist in regard to the extent of the problem, having started to more directly accuse China of starting the pandemic and even suspending funding for the World Health Organization (WHO). Both his rhetorical attacks on China and sanctions on the WHO can be used by Trump in order to deflect criticism against him in the campaign season. Biden, in the meantime, has also launched a video campaign in regard to Trump’s approach and leadership during this crisis. This demonstrates that a large part of the debate in the campaign season will be on “what went wrong?” and “who is to blame?”

Secondly, of course, it is the economy that will shape the voting behavior in the elections. Prior to the outbreak, Trump’s strongest suit was unemployment rates in the country. He was making every announcement in regard to unemployment rates as a rallying cry for his extended presidency. However, the coronavirus outbreak changed everything. In the first seven weeks since the social distancing measures and stay-at-home orders, those applying for unemployment reached almost 34 million. According to estimates, by June, this number will reach around 40 million. It is not clear how many of these unemployed can go back to their jobs after normalization. Accordingly, it may take up to six months or more for service-intense jobs to recover from the effects of the coronavirus outbreak. Furthermore, it is clear that most economies will go into recession during this period. Moreover, some companies are using this period as an opportunity to expedite the transformation to more digital platforms, which would terminate numerous jobs in the process. Considering all of these factors, it is not difficult to predict that unemployment will be one of the hot topics of the election cycle. In addition to this, a potential rise in inflation immediately after the normalization process, as well as budget deficits, will also be discussed among the candidates during their campaigns. Each candidate’s policies and promises about an economic recovery will be an important factor in shaping voter preferences.

Thirdly, in regard to the coronavirus outbreak, it can't be understated that health care will be an important issue that will shape voter preferences during the presidential elections. For almost a decade now, it has been one of the most divisive issues in U.S. politics. Beginning with the debates over Obamacare, there have been clashes between Democrats and Republicans over affordable health care for American citizens. During the time of the coronavirus, this issue demonstrated its significance once again. In addition to a lack of testing, hospitals suffered from a lack of personal protective equipment (PPE) and certain basic medical supplies. Furthermore, there were egregious costs emanating from its diagnosis and treatment. Some analysts have started to liken the U.S. to a “failed state.” Although U.S. intelligence made its warnings about a potential pandemic around the world insistently leading up to the crisis, we have seen that U.S. administrations did not take sufficient precautions. In part, because of this, the U.S. has become the epicenter of the disease. In the campaigns of two major-party candidates for the presidency, both health care reform and the state of readiness for pandemics will be debated by the candidates. The voters will be more attentive to the candidates' plans and programs on U.S. health care. Considering Biden’s contributions to Obamacare, part of the debates will also be centered on this issue and how to revive or revise the plan.