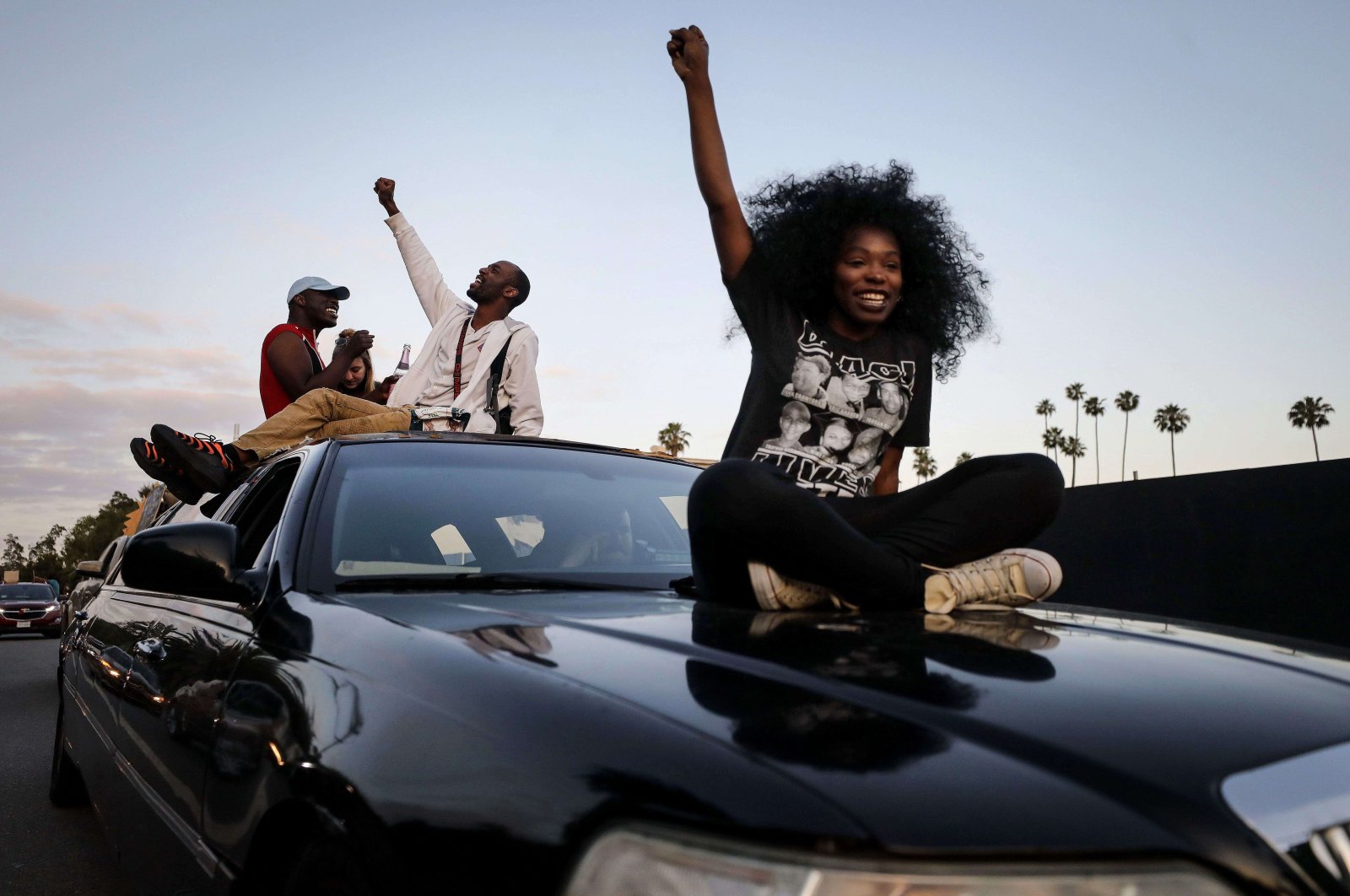 Protesters ride atop a limousine in a march toward Hollywood Boulevard during a peaceful demonstration against racism and police brutality, Los Angeles, California, June 6, 2020. (AFP Photo)
by Hakkı Öcal
Jun 08, 2020 12:05 am

"For they have sown the wind, and they shall reap the whirlwind." (Hosea 8:7)

This week saw Atlanta Mayor Keisha Lance Bottoms save her city from destruction, tempering a revolt with a mere four-minute speech. Before speaking to her public, she told her 18-year old black son: “You are not going out of the house. You should stay at home.” The next day, she told the exact same thing to the young and justifiably outraged people of Atlanta: "Go home, stay at home. It is not a day for protest.” She saw what was happening in Atlanta and across the U.S. and acted to ensure there would be no troop deployments on American streets.

But it happened regardless. In fact, the Insurrection Act, by which the president of the United States can call the U.S. military to intervene to suppress civil disorder, has been invoked throughout the history of the U.S. It has been invoked during conflicts with Native Americans, during labor conflicts in the late 19th and early 20th centuries and to enforce federally mandated desegregation. More recently, the measure was used to support the governor following the looting that took place in the aftermath of Hurricane Hugo in 1989 and during the 1992 Los Angeles riots. Today, however, President Donald Trump is threatening to invoke the act in response to the riots that have manifested in the wake of the police killing of George Floyd.

Chris Hedges and Joe Sacco, in their work, “Days of Destruction, Days of Revolt,” give a detailed account of what the records on The Insurrection Act eschew as “labor conflicts." Similarly, William C. Blizzard, in his book “When Miners March,” documents the West Virginia Mine Wars of 1920-21 (The Battle of Blair Mountain) in which thousands of miners formed an army “to bring the constitution to the coal mines of Logan and Mingo counties.” In the end, they did not succeed in bringing the constitution nor the workers’ union to the mine – only the deaths of hundreds of miners.

National Guard troops actually brought with them guns used during the Civil War. At the time, local authorities looked the other way because the miners themselves were armed with pistols and rifles. Yet in our own time, local authorities looked the other way when Breonna Taylor was murdered by police who entered her apartment with a no-knock warrant because her companion, Kenneth Walker, had shot and wounded a police officer. Two other officers, in turn, fired on and killed Breonna. Breonna was a 26-year-old African American emergency room technician. Walker had been charged with the attempted murder of a police officer, but the charge was later dismissed. The officers had raided the wrong apartment.

There have been other cases in Louisville, Kentucky, which have raised “concerns.” There were protests and calls for justice over the death of David McAtee, the owner of a Louisville barbecue restaurant, who was killed by the police and National Guard soldiers because he was violating the curfew. Local authorities are still investigating who fired first.

English writer and poet David H. Lawrence once said: “You have the myth of the essential white America. All the other stuff, the love, the democracy, the floundering into lust, is a sort of by-play. The essential American soul is hard, isolate, stoic and a killer. It has never yet melted.”

White America should have taken heed of the warning signs. It didn’t. It didn’t listen to Martin Luther King Jr. and others like him. And today, it is not hearing what Atlanta’s Keisha Lance Bottoms is saying.

King, at a meeting in Chicago in 1965, was booed by young black men in the crowd. Later in an interview, he had said that he had held out radiant promises of progress and preached to them about his dreams; and urged them to have faith in America and in white society. He had said, “They are now booing me because they felt that we were unable to deliver on our promises. They are booing because we had urged them to have faith in people who had too often proved to be unfaithful. They were now hostile because they were watching the dream they had so readily accepted turn into a frustrating nightmare.”

One mayor has managed to find the right words for now. But what happens when her own kid will no longer listen? Who is going to stop the whirlwind?