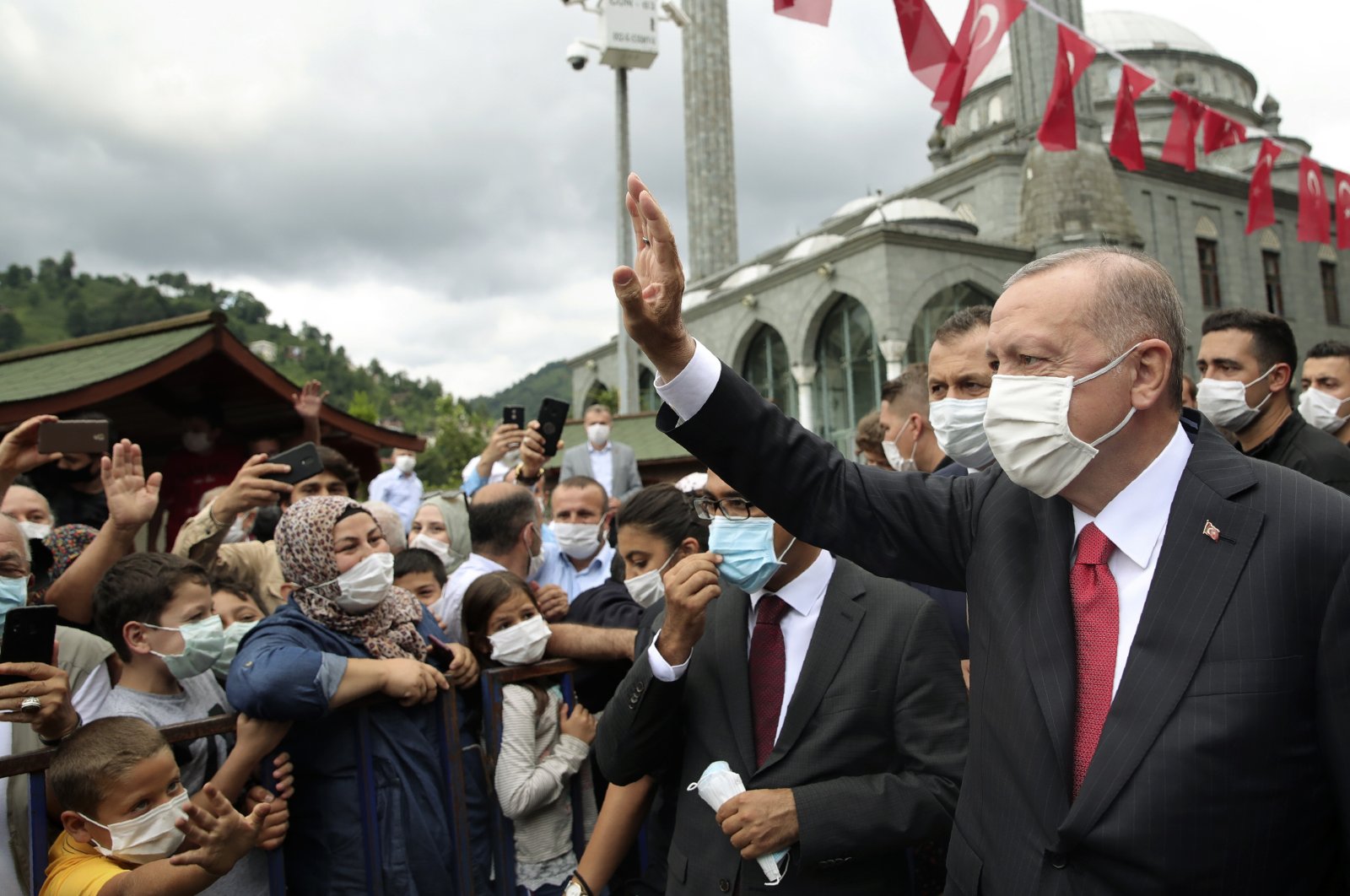 President Recep Tayyip Erdoğan wearing a face mask, as a precaution against the coronavirus, waves at his supporters in the Black Sea city of Rize, northern Turkey, Aug. 15, 2020. (AP Photo)
by Burhanettin Duran Aug 17, 2020 12:05 am
RECOMMENDED

The Justice and Development Party (AK Party) celebrated its 19th birthday earlier this week. Over the course of its history, the movement has single-handedly governed Turkey – an accomplishment that has eluded all others in the history of the country’s multi-party democracy.

The changing nature of the AK Party’s performance over time has been the subject of a heated debate. Up until the early 2010s, the Western media hailed President Recep Tayyip Erdoğan’s movement as a "model" for the Muslim world.

Though Turkey’s neighborhood succumbed to civil wars and turbulence in the aftermath of the Arab Spring, the AK Party’s resilience caught its supporters and opponents by surprise. Indeed, over the last seven years, the movement has successfully overcome numerous crises that brought down governments elsewhere.

As Turkey’s commitment to protecting its national interests became more prominent, public debate over the AK Party has taken a negative turn.

Strategic elites, who flip-flopped in the face of national crises, were left with no choice but to portray President Erdoğan’s seemingly invincible movement as "authoritarian." The ideological bias shaping the narrative, however, often makes it more difficult to account for the AK Party's "exceptional success" in electoral contests – 15 landslide victories in a row.

Critics seem to believe that they can add labels to the style of leadership of the Turkish president, who they repeatedly claim is doomed to lose power. Ironically, the president has always managed to surprise his opponents through his flexibility, realism, dynamism, ability to read developing situations and decisive action.

Throughout his career, the Turkish president has opted to take risks, whether to implement reforms or to manage tensions. He has known when to abort his own unsuccessful initiatives when they have gone against Turkey’s interests. Demonstrating unshakable commitment in the fight against the guardianship regime at home, whether Kemalist or Gülenist. Erdoğan has not hesitated to make foreign policy moves that his self-confidence and ambitions have required. His administration’s work in Syria, Iraq, Libya and the Eastern Mediterranean alone attests to this fact.

When necessary, he has challenged existing forms of alliances to renegotiate terms. Despite being prepared to use hard power, the Turkish leader has always preferred cooperation and diplomacy. This has indeed been the summation of his relations with the U.S., the European Union, Russia and others – always the last to escalate tensions, Erdoğan never succumbed to ideologically-charged smear campaigns during these periods of turmoil.

The AK Party has placed the Turkish people’s welfare and the nation’s well-being at the center of its political platform. Its references to "conservative democracy," "our civilization" and "the national-domestic position" has evolved into a narrative surrounding its policy decisions.

In Erdoğan’s own words, here’s how that story goes, "The AK Party is a political party that made the Turkish nation’s dreams come true, rekindled the Muslim ummah’s hopes and opened new doors for humanity." The gist of his brand of politics, in turn, is as follows, "Our cause (brings together) the heart of the Seljuks, the conscience of the Ottomans and the reason of the Republic."

Indeed, the AK Party’s story calls for dynamic, rather than static, policies. Both reform and competition, like cooperation and confrontation, are parts of that same story. One cannot write their own story alone or from a single perspective. One’s dreams may guide their path, but it all boils down to managing realities. Calls for cooperation are indeed valuable, but the choices of others, too, determine the outcome.

Since 2007, Turkey has proved willing to risk tensions with the West, when certain European countries have derailed its integration into the EU and thrown their weight behind terrorist groups like the PKK and the Gülenist Terror Group (FETÖ) or endorsed Greece’s maximalist demands in the Eastern Mediterranean – or when Washington has armed PKK/YPG terrorists. It is virtually impossible to keep talking to armed groups if they are hell-bent on spreading terror. Nor can one impose a proposal for cooperation, which has been turned down, on oneself against one’s own interests.

The main theme of the AK Party’s story has never changed, "To make Turkey great and powerful." The story, if detached from reality, does not only amount to a wishlist. It can also make one’s life very difficult – if not end it.