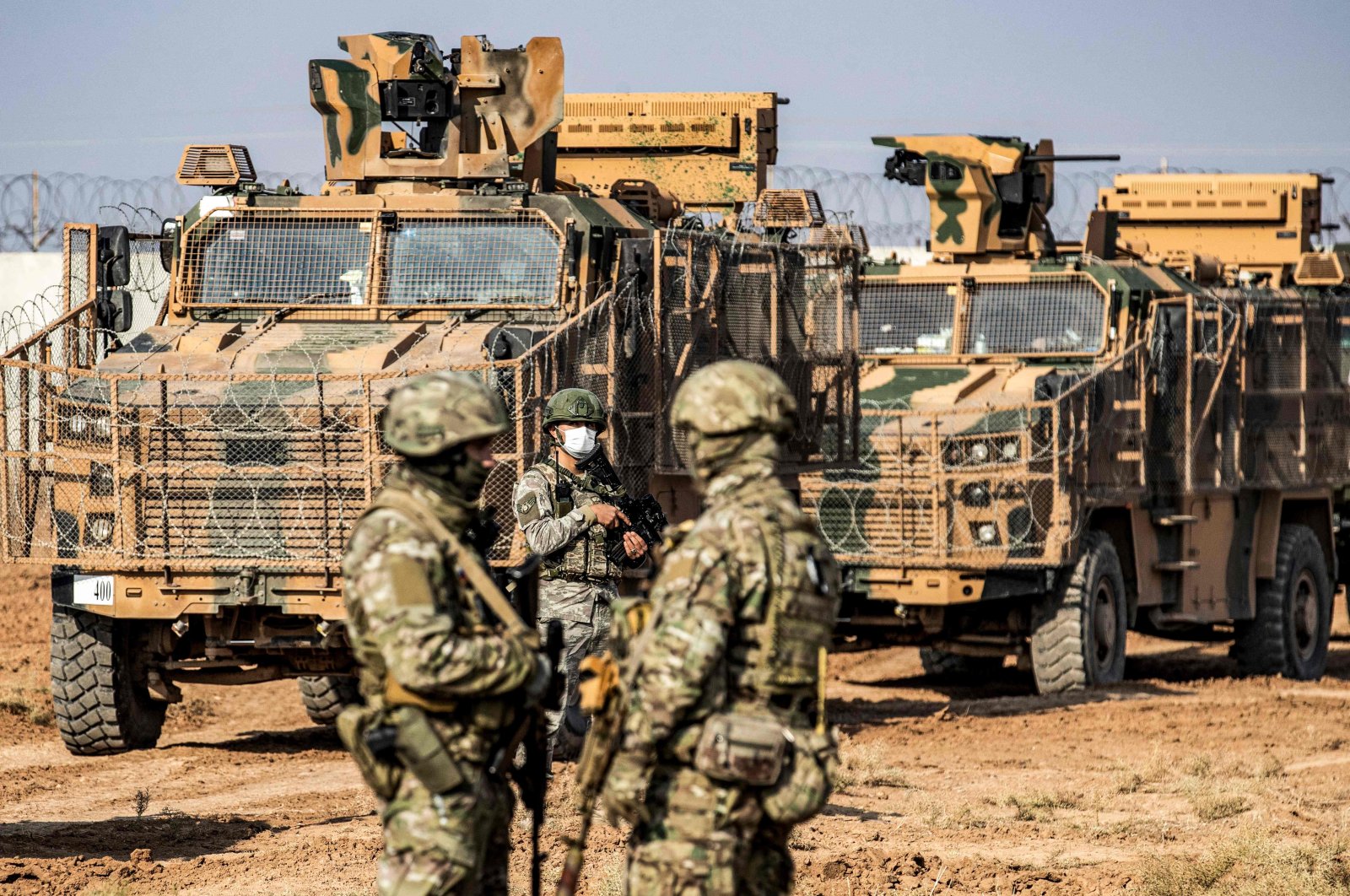 A Turkish soldier (C) looks on as he stands near Russian soldiers during a joint military patrol, near Darbasiyah along the border with Turkey in Syria's northeastern Hasakah province, Nov. 30, 2020. (AFP Photo)
by Burhanettin Duran Dec 07, 2020 12:05 am

Ankara's foreign policy moves are not motivated by maximalist claims, but a geopolitical necessity to protect its security, interests

On Wednesday, I joined a distinguished group of speakers to discuss Turkish foreign policy at the TRT World Forum. Once again, on the occasion, I concluded that Ankara's involvement in global flashpoints is being questioned on two bases: Turkey's overreach and its ideological motivations. The former questions Turkey's capabilities and the latter its intentions.

The question of overreach rests on the assumption that Turkey expended its capabilities and administrative skills through its active role in Syria, Iraq, Libya, the Eastern Mediterranean and Nagorno-Karabakh. Advocates of this argument do not appreciate Turkey's broad scope of involvement in the aforementioned regions, which are critical to Turkey's national security, while Ankara maintains it does not make maximalist claims to the lands.

On the contrary, Turkey uses its influence to claim its seat at the table and does not seek to unilaterally resolve crises. The nation simultaneously competes against while negotiating with other heavyweights. The Turkish military presence, in turn, rests on a low-cost operation that supports its national defense industry.

During periods of geopolitical change, Turkey determines its strategy depending on the interaction between the economy, foreign policy and security. It depends on the leadership of President Recep Tayyip Erdoğan to take initiative and act pragmatically while remaining flexible when necessary. Thus when bilateral relations come under duress, Turkey can turn over a new leaf.

Erdoğan understands the significance of common values, friendships and interests thanks to the Arab revolts, the Syrian civil war, the Saudi-Iranian rivalry and the annexation of Jerusalem. The president has also long understood the difference between talk and action.

Those accusing Erdoğan of implementing policies of neo-Ottomanism, pan-Turkism, or Islamism are in reality worried about losing their status or failing to secure their own interests. Greece, the United Arab Emirates (UAE), France and Israel immediately come to mind.

Others who want Turkey to be the "perfect ally” – meaning docile – also join the chorus, with criticism from the United States and European Union reflecting the sentiment. Indeed, at the most recent NATO meeting, U.S. Secretary of State Mike Pompeo urged Ankara to behave like an ally.

Ironically, it is this approach that violates the essence of the alliance. They expect Turkey to deal with civil wars in Syria and Iraq as well as refugees and terrorist groups – without Europe contributing to the bill. All the while Washington expects Turkey to remain silent on the U.S.' support of PKK/YPG terrorists.

In other words, they want to impose a unilateral alliance on Turkey instead of finding a middle ground.

This disciplinary approach, of which France is now the chief advocate, attempts to influence the Joe Biden administration, too, and misportray Turkey as a problematic ally. Indeed, the Biden administration pledges to strengthen and breathe life into the transatlantic alliance – which some EU members would like to exploit to discipline the Turks. Needless to say, that would be a grave mistake.

Washington, which seeks to restore America's role as a global leader, will take note of Turkey's active presence in many regions as it reassesses its strategy. The Western alliance must identify its shared interests with Turkey and turn over a new leaf.

Turkey managed to play an active role in world politics during Donald Trump's presidency, when chaos, unilateralism and looking out for one's own interests were the rules of the game. If the Biden administration ushers in an era of multilateralism, values and alliances, Ankara has what it takes to play an active role under the new circumstances. Failure to acknowledge geopolitical realities would lead Turkey to take care of its own business.