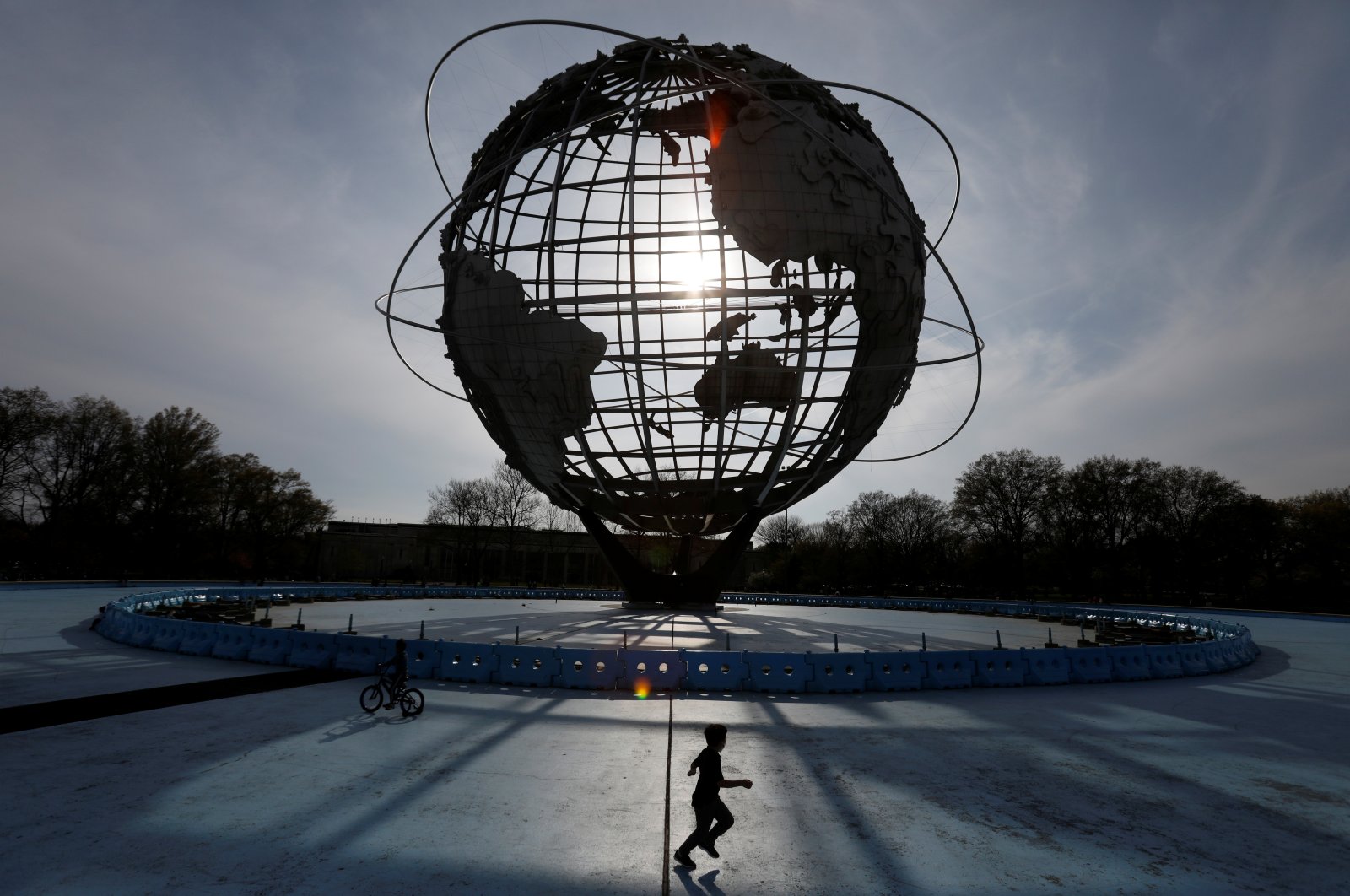 A child plays under "The Unisphere" in Flushing Meadows-Corona Park during the outbreak of the coronavirus, in the Queens borough of New York City, April 25, 2020. (Reuters Photo)
by Kerem Alkin Sep 21, 2020 12:05 am
RECOMMENDED

Amid the coronavirus pandemic's devastating effects on the world economy, the focus has shifted to global trade and international financial markets with little consideration for the future of Earth as a whole. However, if climate change, rising temperatures, environmental pollution and the unsustainable use of underground and aboveground resources continue as they are now, harsh living conditions await us in as little as a decade.

A period fully focused on the concepts of zero waste, clean and green production and sustainable agriculture, as well as updating the manufacturing industry, the construction sector, the energy sector and the services sector is needed. The first phase should cover the next 10 years, followed by 25 more.

This process will make it extremely difficult for countries and companies to hoard green technology, smart production and smart technology. The threats caused by poisoning the world will lead to a rapid worldwide impact that will eliminate technological and ecological imbalances between developed and developing countries, forcing everyone to work together.

Therefore, after the world's battle with COVID-19, a radical transformation will be necessary for international business for the benefit of society and the economy. Intense collaboration to build an international business network with full transparency and higher standards that is more progressive, develops innovative technologies and shares more knowledge and data has already become the top priority of many multinational institutions and companies.

Today, we are experiencing an event that has made it impossible to impose a monolithic approach to production.

Turkey has seen great success over the past 10 years in terms of its domestic hardware and software technologies, including investments that are required for the nation to become self-sufficient in the areas of digitalization, intelligence, defense, security and energy.

In this respect, Turkey will be able to rapidly adapt the technologies necessary for smart-manufacturing and smart living in strategic fields such as agriculture, manufacturing, construction, energy, transportation, logistics and financial services. This also means it has great potential to export high value-added technologies to the world.

With new-generation education processes, financing methods and innovation ecosystems, as well as sustainable human assets and a sustainable investment environment, Turkey has the potential to become the world's most attractive production center. Then, the positive results of the construction of the new-generation national economy will be reflected in all segments of society.

During the unique Cold War period, even though statements, claims and scenarios that a third world war would break out between the West and the East were common, essentially, in the bipolar world model, everything was more certain. During the 1990s, after the Berlin Wall and the Eastern Bloc collapsed, it was thought everything would be more stable in a unipolar world under the control of the U.S. Yet, the exponential escalation of international terrorism and criminal organizational activities set the whole world on fire, and we found ourselves in a period of asymmetric threats and uncertainties.

Following the 9/11 attacks and America's subsequent offensives in Afghanistan and Iraq, with the public authority gap and the fragmentation caused by these operations, Africa, the Middle East and Central Asia were dragged into a much more severe period of chaotic uncertainty.

As if that weren't enough, we were also faced with the 2008 global financial crisis, an inevitable consequence of the banking and finance regulations the U.S. Congress loosened in the late '90s. This event brought along a series of erosion and trust issues toward the international rating system regarding the balance of supply and demand in the financial system from developed to developing countries.

Now, I look back and think about all the economic and political trauma of the last 23 years since the Asian crisis, from the high-speed movement in the global monetary system to the over integration in the financial structure, and to the imposed amorphous globalization process and all the damage it has caused.

As I glance through the extensive discussions on modern monetary theory, financial transmission mechanisms, reserve money, liquidity, flexibility of monetary policy instruments and quantity theory, I add to this the further aggravated uncertainty caused by the global virus outbreak in 2020.

All of the world's economic administrations and leading central banks are aware that they will not be able to overcome or produce solutions to this deepening age of uncertainty with orthodox, that is, classical, memorized and routinized economic approaches.

This is a period in which heterodox measures, policy tools and strategies going beyond the usual should be implemented. Therefore, central banks must mobilize all means and strategies. Considering that each of these aspects is also valid for Turkey, we are defending that orthodox, memorized solutions, methods and approaches should now be abandoned.

Currently, economic management accumulates all the monetary and fiscal policy instruments and all the direct control program tools for growth, employment, exports, price stability and financial stability; however, instead of ignoring and criticizing the age of uncertainty, we have reached a point where we need to focus on heterodox, out-of-the-box solutions. It is not the prestige of institutions, but the reputation of economists that is at stake.