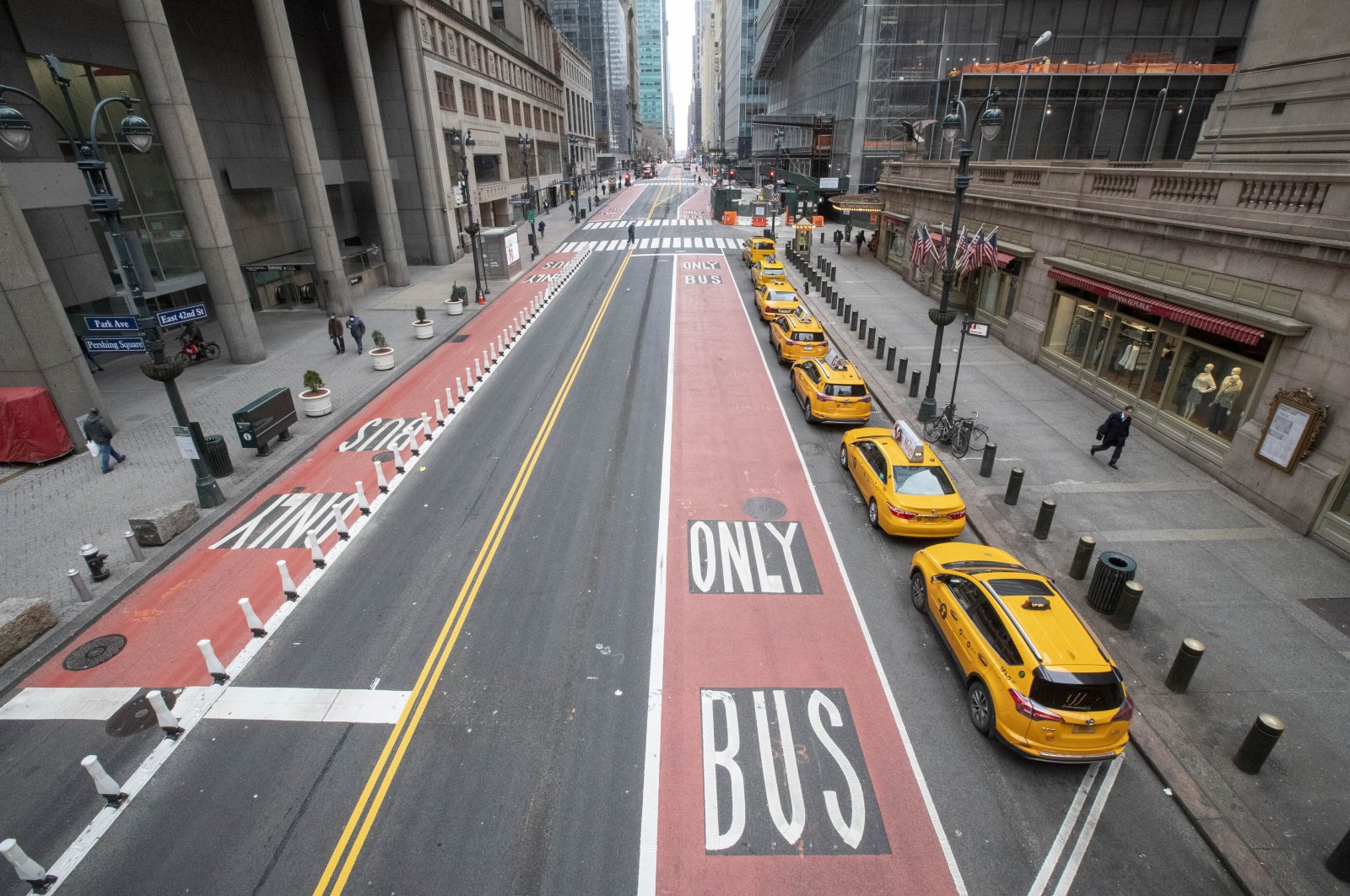 Yellow cabs line up on an empty 42nd Street waiting for fares outside Grand Central Terminal in New York, Wednesday, March 25, 2020. For the millions of Americans living under some form of lockdown to curb the spread of the new coronavirus, not knowing when the restrictions will end is a major source of anxiety. (AP Photo)
by Hakkı Öcal
Mar 29, 2020 3:51 pm

The Chinese bureaucratic dictatorship may be lying, as they have been doing on almost every issue in their goal of surpassing the U.S. in world leadership. The more Chinese President Xi Jinping promises to be a responsible member of the international community, the more lies come from the Chinese bureaucracy. This might be the case when they say there are no new cases of COVID-19 in China. In his efforts to be recognized as a reputable international leader, Xi needs only one thing- success fighting an international calamity.

As the first responder to the new coronavirus, he could have shown the ability to coordinate a global struggle against it. Other nations, Iran and Italy, for instance, could have learned from China's experiences. Instead, the Chinese government is trying to do this with the sale of rapid test kits and by providing documents about their progress fighting the virus. The point in all these efforts is to make China shine as a global coordinator during a global catastrophe. The only problem in their scheme is that what the Chinese government says is not being authenticated by an independent media, because it has expelled international reporters.

As a result, the U.S media continues to play the blame game, internally and externally. The major American newspapers and networks, still thinking that this is an international and national political game, failed to call attention to the failure at the G-20 summit. President Recep Tayyip Erdoğan, the World Health Organization (WHO) Director-General Tedros Adhanom Ghebreyesus and the U.N. Relief Chief Mark Lowcock called for united action to fight against the coronavirus.

The U.N. launched the Global Humanitarian Response Plan while the U.S. was busy putting together their historic, and equally useless, $2 trillion stimulus package. Some researchers estimate that the federal government may need to provide up to $1.5 trillion to businesses that employ 500 or fewer people if the coronavirus emergency lasts three months. Putting a one-time $1,200 payment into everyone's pocket was a waste of money according to New York Gov. Andrew Cuomo. Instead, he says, more funds should have been provided to the states. Also, some economists argue that a much larger amount than the stimulus plan provides is needed. The U.S. president, invoking his Korean War-era authority to order U.S. manufacturers what to produce, is desperately making ventilators needed to keep the COVID-19 victims alive. If he keeps the current ratio of survivors to the infected, he will claim victory against the invisible enemy that he calls “the Chinese virus.”

On the other hand, the U.N.’s $2 billion plan for “the most vulnerable countries” is going to be another failure, since it is just a drop in the bucket. These nations are not even reporting the number of infected or dead.

As Erdoğan said of the G-20 during the online summit, “We will only win this battle through solidarity.” World leaders, and the media, must leave the individualistic posturing and infighting within and among the countries aside to create that solidarity. The members of the European Parliament keep calling for a unified EU response to the crisis. Yet, not only the parliament, but the entire EU bureaucracy seems to be on a virus vacation. Italy screams for help, and only the Russian Federation comes to the rescue, while the German government’s strong-arm tactic is to reroute the much needed ventilators Italy ordered to Germany. Had the international organization that Erdoğan suggested been realized, there would be a surplus of ventilators manufactured in a plethora of countries with a transfer of technology and investment.

Unfortunately, even the most dangerous medical scourge cannot tame humanity.