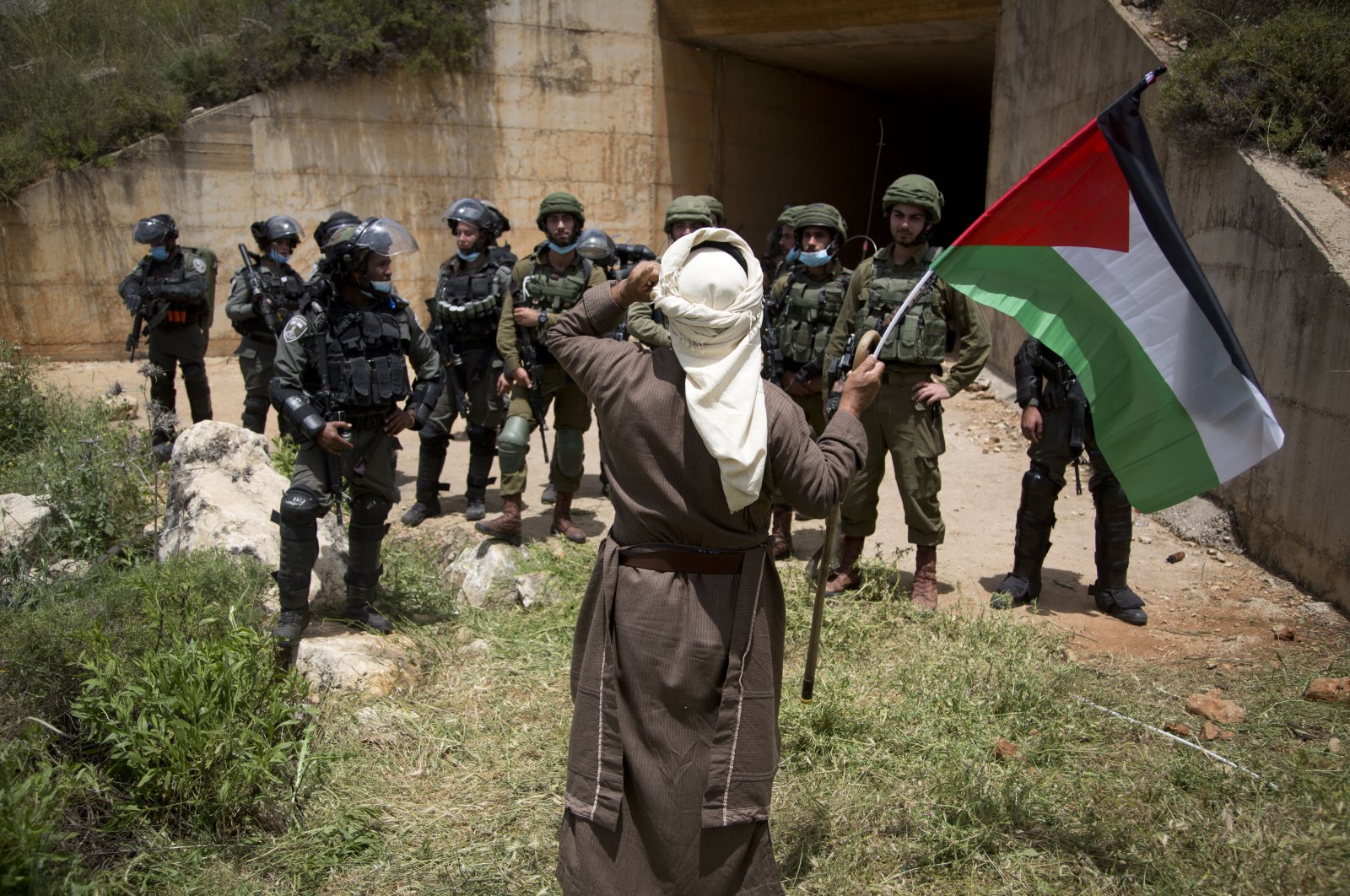 A Palestinian holds the national flag in front of Israeli border police during a protest marking the 72nd anniversary "Nakba," or catastrophe – a leading symbol against the Israeli annexations and occupations, near the West Bank city of Nablus, May 15, 2020. (AP Photo)
by Burhanettin Duran May 21, 2020 12:05 am
RECOMMENDED

After three elections, Israel’s new coalition government was finally sworn in on Sunday. Likud’s Benjamin Netanyahu will serve as prime minister for the government’s first 18 months before being replaced by Blue and White leader Benny Gantz. The end of Israel’s government crisis stands to fuel fresh tensions in the Middle East. Israeli expansionism will be at the top of the country’s agenda during the hot summer months of the 72nd year of the Nakba.

Netanyahu and Gantz formally agreed to bring U.S. President Donald Trump’s "vision for peace" to the Knesset’s attention by July 1. At the same time, Tel Aviv prepares to annex Israeli settlements in the West Bank and the Jordan valley. Before taking the oath of office, Netanyahu hailed that potential annexation was “a glorious new chapter in the history of Zionism.”

Those potential annexations would scrap a two-state solution based on the 1967 borders. Israel will impose its expansionist agenda, i.e. the one-state solution, on the Palestinian people and the rest of the world. Jordan, where Palestinian refugees constitute a significant part of the population, will experience a serious crisis of legitimacy due to the loss of Jerusalem and other places. A fresh wave of Palestinian migration, too, is in the books. Hence King Abdullah’s warning about the annexation leading to “a major clash” between Israel and Jordan.

Not that those warnings mean anything to Tel Aviv. Benjamin Netanyahu believes that he has stumbled upon a historic opportunity. He enjoys the support of his new coalition government and the U.S. Ahead of this year’s U.S. presidential elections, Donald Trump will encourage annexation to impress Jewish and Evangelical voters. The Gulf states and Egypt, in the meantime, had never had such close relations with Israel. That alliance, formed based on the "Iranian threat," deprives Arab governments of any influence regarding the Palestinian question.

U.S. Secretary of State Mike Pompeo visited Israel to meet Netanyahu and Gantz prior to the new government’s formation. Pompeo’s primary objective was to warn Tel Aviv against its ongoing cooperation with China in key areas including infrastructure, communications and security and to strong-arm the Israelis into siding with the U.S. in the brewing "cold war" with China. Iran and the question of annexations, too, have been negotiated. By saying that annexation was Israel’s decision to make, Pompeo signaled that the U.S. endorsed Netanyahu’s plan and exchanged views with Israel on the potential outcome of annexation. Ahead of this year’s presidential election, the Trump administration intends to portray Israeli expansionism as a contribution to peace and, possibly, mount pressure on Joe Biden, the Democratic candidate, over that issue.

The U.N. Security Council, which the U.S. has forced into a deadlock, cannot take any meaningful steps to prevent Israel’s annexations. Nor are Arab states, whose regional policy has the same wavelength as Tel Aviv, likely to launch a diplomatic offensive – or do anything more than issue official statements. The Gulf monarchies, which transformed the Arab revolts into bloody civil wars, not only prevented the rise of democracy in the Arab world but also laid the groundwork for Israeli expansionism. Donald Trump’s victory in the U.S. presented an additional opportunity to Israel, which now seeks to take advantage of the COVID-19 pandemic.

Turkey is expected to be the most vocal critic of Israeli expansionism. The Turkish government is likely to mobilize the international community against the annexation of the Jordan valley – as it did in response to Jerusalem’s unilateral declaration as Israel’s supposed capital. European nations, which support a two-state solution, too, would reject those annexations. Provided that Israel does not care about diplomatic reactions, the most effective measure against Israeli expansionism would be a formal recognition of the State of Palestine by the European Union. Moreover, the EU could sanction individuals and companies linked to the annexation.

Unfortunately, there is no balance of power in place today to facilitate a just peace plan.