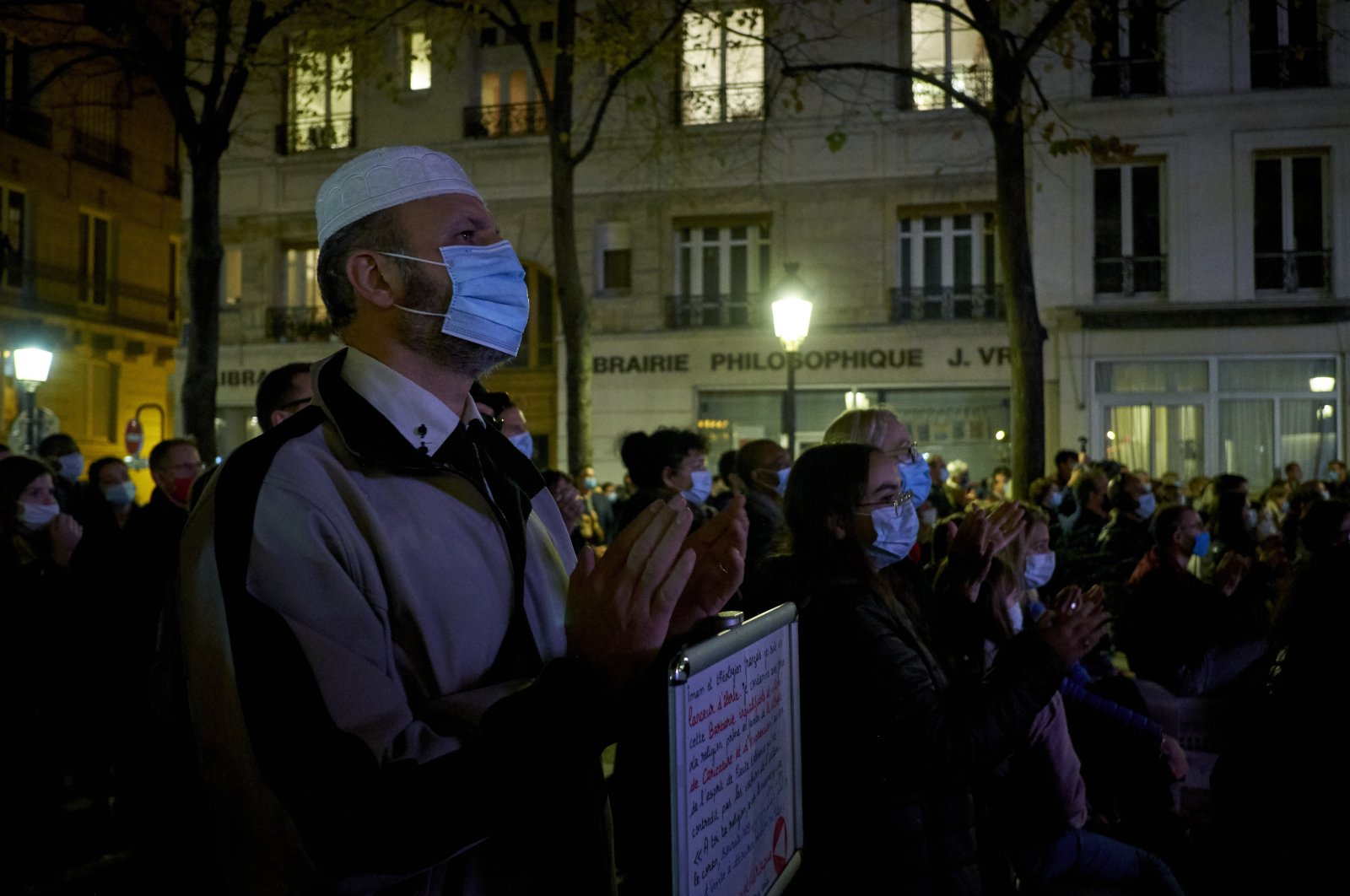 People gather on the Place de la Sorbonne to watch a live broadcast on a giant screen of the national tribute to the French history teacher Samuel Paty, who was killed in a terrorist attack, in the capital Paris, France, Oct. 21, 2020. (Photo by Getty Images)
by Talha Köse
Nov 03, 2020 12:05 am

A French high school teacher, Samuel Paty, was brutally murdered by a young, Russian-born Muslim of Chechen descent, Abdoullakh Abouyedovich Anzorov. This heinous terrorist attack caused outrage in French society. The murder of Paty was not the country's first such incident. France had also previously suffered Daesh violence and the 2015 Charlie Hebdo attack. Many leaders, including those from Muslim countries, demonstrated solidarity with France in the aftermath of those acts but Muslim communities and institutions were still put under surveillance and heavy pressure.

French President Emmanuel Macron's response to Paty's murder changed the nature of the discussion in France. Macron, rather than using a nuanced comment and condemnation, put Islam and Muslims at the center of this unfortunate incident. He said that "this is a typical Islamist terror attack" and portrayed the murder as a threat against the country's freedom of speech. His statement "Islam is a religion globally in crisis" and his arrogant call for a reform in Islam angered Muslim leaders.

This practice of desecrating Islamic values and symbols under the "freedom of speech" banner has created an outcry all over the Muslim world. French Interior Minister Gerald Darmanin ordered that the Grande Mosque de Pantin be closed for six months even as any Muslims and religious leaders in France and elsewhere condemned the attacks against Paty and those in Nice and Avignon.

The recent responses of the French bureaucracy are likely to have a disturbing impact on Muslims living in the country. The collective punishment of their community because of a terrorist attack is a dangerous development that may further marginalize Muslims.

The hatred against Islam and Muslims is becoming a mainstream practice in France. Rather than condemning the acts of small groups that are spreading hate, intolerance and violence, French authorities target the essence of the Muslim belief system and question its compatibility with modern values.

French officials' characterization of attacks committed by Muslims and their quick-fix solutions contradict the scientific evidence. This populist and biased way of depicting terrorist acts and hate crimes just targets the Muslim communities and marginalizes even the more moderate voices.

French authorities are assuming that people committing those brutal murders are Muslims that represent the mainstream understanding of Islam. The research on "Islamist violent extremism" has demonstrated that those who commit these heinous acts are either not knowledgeable about the Islamic religion, value system and practices or do not have proper training about the faith and adequate understanding of Islam.

Humiliation, discrimination, economic and social marginalization and exposure to trauma are more relevant predictors of resorting to radicalization and violent extremism among many identity groups including Muslim immigrants.

This practice puts Muslims of all views on the spot. Islamophobia is becoming mainstream thought and state policy in France but this view used to be a marginal approach pursued by the extreme right and xenophobic circles in France because marginalizing and disenfranchising Muslim communities will lead to grave consequences.

Muslim communities all over the world do not generate security problems or support terrorist activities. Extremists worldwide are not pursuing their political goals with violence against non-Muslims or violence against Muslims who have different views.

What is more dangerous in these developments is that extremists of the French radical right and extremists continue to feed each other and benefit from this polarization. Voices of the moderate majority from all sides are silenced under the rubble of terrorist attacks. We know the possible consequences of demonizing a particular community and belief system from our experiences of the 1930s and 1940s in Europe.

It is time to increase the dialogues between the moderate voices and strengthen the cooperation and solidarity among them for a more inclusive and tolerant society in France and elsewhere. There is sufficient scientific evidence and research related to the underlying sources of radicalization and violent extremism. Populist politicians should not distort the reality and scientific evidence for their political agenda.