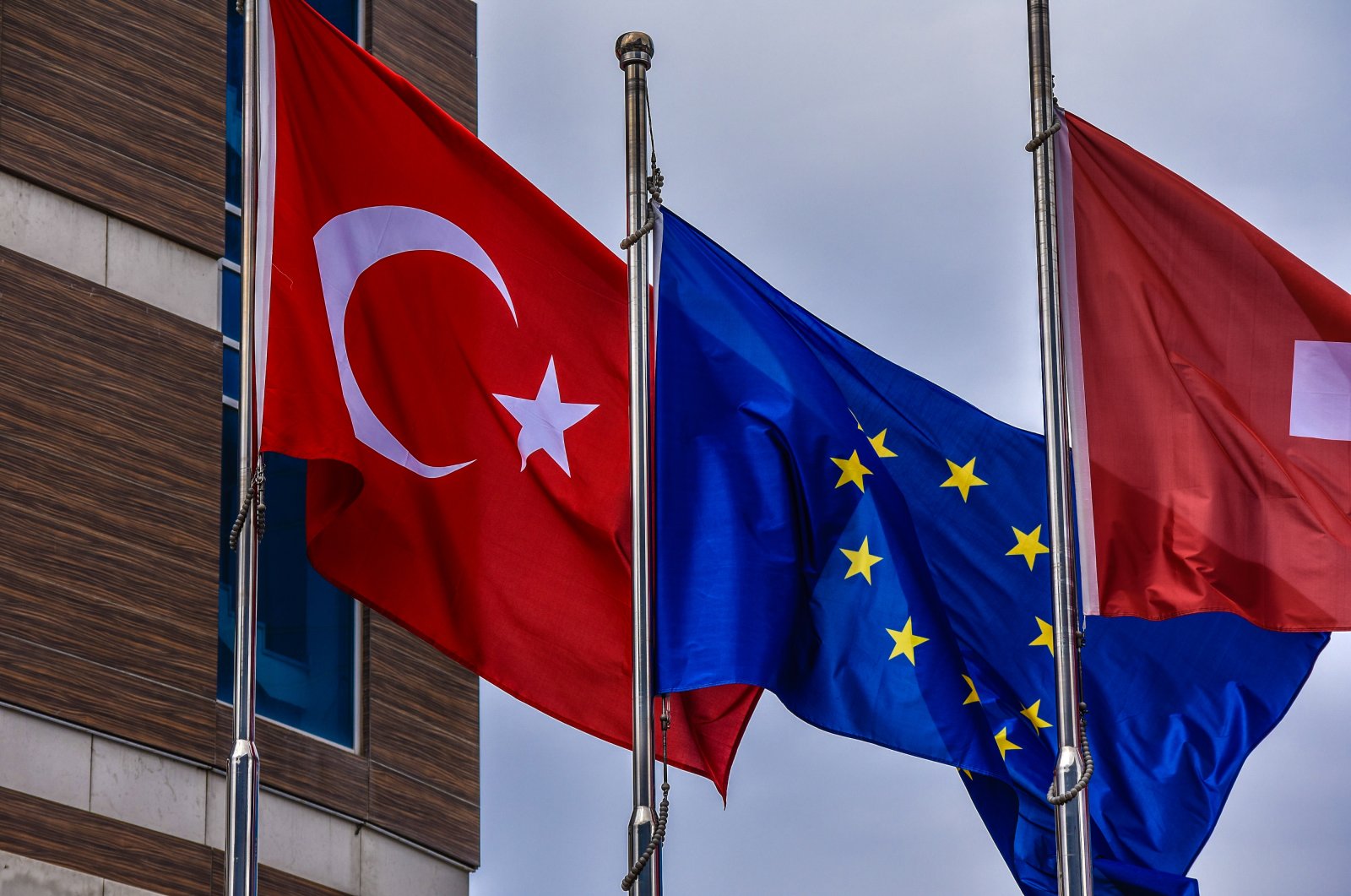 Turkish and European Union flags flutter in the wind outside a hotel in Söğütözü district, Ankara, Turkey. (Photo by Getty Images)
by Talha Köse Apr 07, 2021 12:05 am
RECOMMENDED

Turkey's relations with Washington and Brussels have been in decline for the last several years. This downward trend in diplomatic relations has paused but the accord has not yet been transformed into a more constructive one.

The failed coup attempt by the Gülenist Terror Group (FETÖ) was a significant turning point, which furthered the trust gap and deteriorated Ankara's relationship with its trans-Atlantic partners. Since then, both Washington and Brussels see relations with Ankara in a transactional manner.

In the last couple of weeks, Brussels has put in a high level of effort to improve dialogue with Ankara. Ankara's initial response to the mutual efforts has been positive. There is cautious optimism from Turkish officials to strengthen ties with the EU because of the intense effort of critics from the European side.

European actors are also skeptical about Ankara's sincerity in this recent effort to engage. They characterized the nature of the current positive efforts to improve with Turkey as "gradual, proportional and reversible." This conditional improvement is far better than no constructive efforts whatsoever.

With Washington, there is still no sign of positive momentum. Washington prefers to maintain the negative stalemate until a new and more realistic, sustainable relationship emerges in Turkish-American relations.

There are too many hurdles to attain such positive momentum. The anti-Turkey stance in both wings of the U.S. Congress (the Senate and the House of Representatives) and the Pentagon's and the State Department's lack of motivation to improve ties with Ankara are also obstacles for positive momentum with Ankara.

Rather than increasing cooperation and coordination with their Turkish counterparts, officials in Washington and Brussels prefer to contact Ankara when they are to do so.

There is a need for a powerful success story in the Turkish-American joint effort to move the relations forward.

Officials in Washington and Brussels have not followed proper negotiation protocols or resorted to traditional bilateral diplomatic processes to sort out their differences with Ankara.

Under asymmetric power relations, Ankara is often pushed to accept the unequal position that is designated to it. This policy has proven to be counterproductive and poisoning relations. The first principle of successful diplomatic interaction is the recognition of the key counterpart.

Washington still avoids eye contact with Ankara. There is a greater effort to coordinate but a prominent division of labor between the EU and the U.S.

European actors try to coordinate their foreign and security policies with Washington.

No one expects a magical touch from the current visit. Still, a genuine dialogue between Turkey and the EU may help the bloc drop the toxic language of threats and sanctions and may establish a foundation for more robust and more constructive strategic interactions.

Such a change may also be desirable for Ankara, which feels stressed due to its difficult foreign policy agenda.

Turkey's effort to expand its strategic and diplomatic autonomy was its utmost priority for almost a decade. Reducing dependence on arms imports and pursuing a more independent foreign policy discourse and practice have been the cornerstones of Turkey's foreign and security policies.

This approach has been followed because of a lack of reliable support for matters essential to Turkey's national security agenda.

Turkey's security interests in Syria and the Eastern Mediterranean still contradict its allies' policies and preferences.

Having developed some autonomous capacity in defense and having reduced the terror threat within its territories, Turkish officials now feel more comfortable about national security.

As Turkey manages to reduce national security risks, especially in dealing with the threat of terrorism, a more constructive diplomatic agenda becomes Ankara's priority. Increasing diplomatic contact with high-level EU officials is an important step, but that needs to be substantiated with a more concrete game plan.

Washington and Brussels can contribute to the improvement of ties with Ankara by assisting Turkey to address its critical national security issues emanating from the instability in Syria and Iraq.

Playing a more fair role in the Eastern Mediterranean tensions will also be considered a constructive step by Ankara.

Turkish society's grassroots will also appreciate positive incentives in the areas of the economy, and in cultural and educational diplomacy.