Resurgence of anti-Islam in Europe 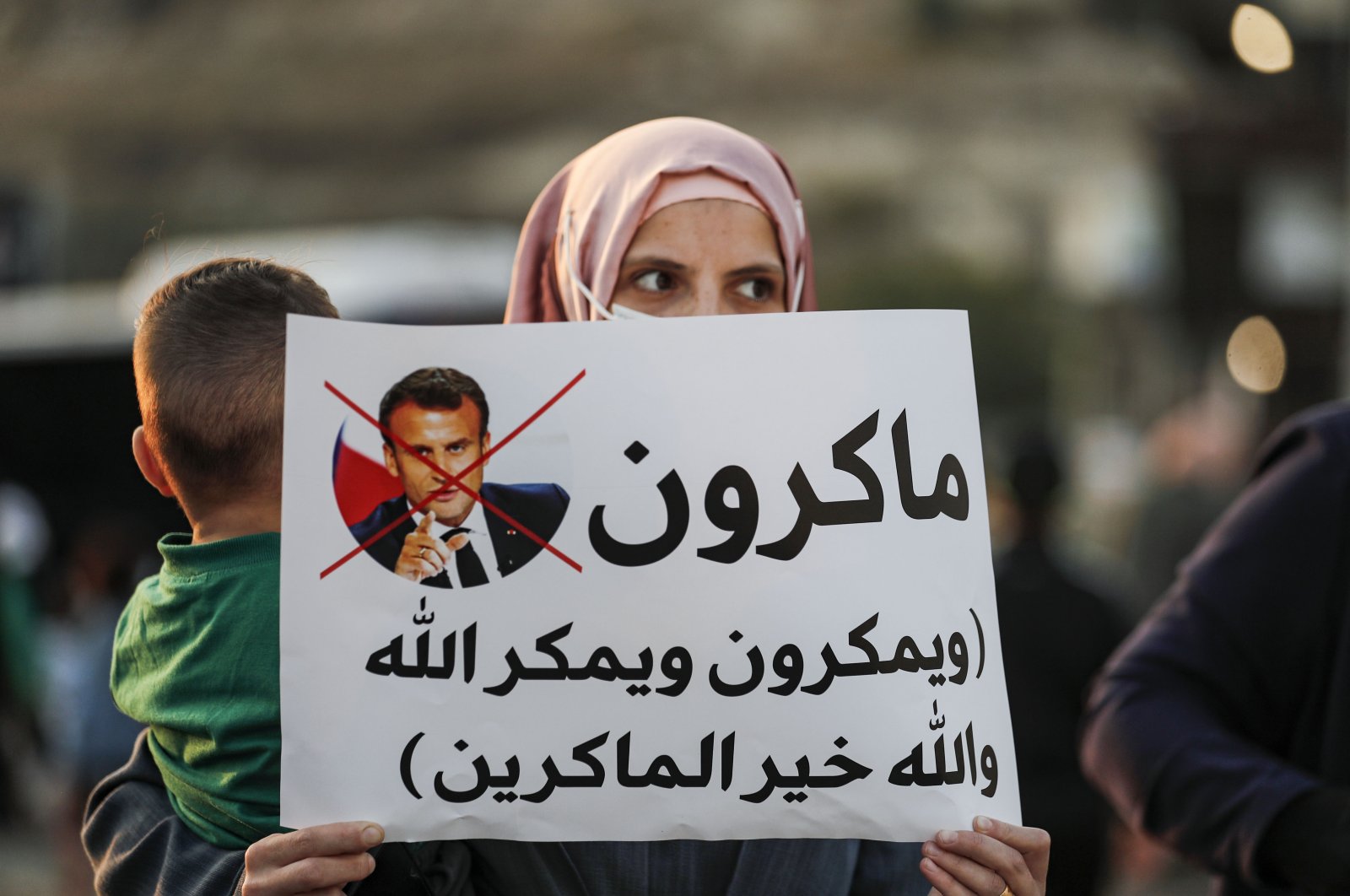 An Arab-Israeli, Muslim demonstrator, holding a child and clad in a mask due to the COVID-19 pandemic, holds up a sign during a rally protesting against French President Emmanuel Macron's anti-Islam remarks, in the Arab town of Umm-Al Fahm, Haifa district, northern Israel, Oct. 25, 2020. (AFP Photo)
by Muhittin Ataman
Oct 28, 2020 12:05 am

The current European governments and politicians who face many political, social and economic problems try to use other states, peoples and civilizations as a tool for their own interests. They try to instrumentalize them for their own good, no matter how it might harm others.

They easily blame others for the problems that they experience at home.

For the last two decades, mainstream political parties, especially center-left parties such as socialists, have lost not only their governments but also their influence in most European countries.

European countries have been experiencing the rise of ultra-nationalist movements, far-right political parties and racist political actors. Radical and xenophobic parties began to enter parliaments, and some of them came to power.

Today, European political actors identify themselves based upon otherization and alienation of others and are therefore strongly anti-migrant, anti-Muslim and anti-black.

Recently, Macron made several statements insulting Islam and Muslims. First, he claimed that “Islam is a religion that is in crisis all over the world today.” Then, he ordered the cartoons insulting the Prophet of Islam to be projected onto government buildings in Paris. Considering the rise of anti-Islam sentiment, Macron and France are not alone. Many other politicians and countries increasingly pursue similar policies.

The Muslim world immediately condemned Macron and France over the treatment of Islam, especially after the cartoons insulting the Prophet of Islam were projected onto governmental buildings in France. Many Muslim individuals, non-state actors and state officials demanded a boycott of France from their respective governments.

Many social media campaigns were announced by different political groups to boycott French products. Several Arab trade associations and many companies withdrew French products from supermarkets in response to Macron’s comments on Islam and Muslims.

Many countries reacted to Macron’s spread of hatred. Different states such as Turkey, Kuwait, Pakistan, Qatar, Iran, Jordan, Morocco, Algeria, Palestine and Tunisia made official explanations against France and decided to impose sanctions against French products.

Only officials from the United Arab Emirates (UAE) and Saudi Arabia made pro-France explanations, mainly due to their fierce anti-Turkey stance. For example, an adviser of Crown Prince Mohammed bin Zayed (MBZ) and a professor of political science, Abdulkhaleq Abdulla, tweeted: “The equation is simple and clear: know that when (President Recep Tayyip) Erdoğan attacks Macron, Macron is right.”

Abdulla knows well that Macron’s explanations are not about Erdoğan but about the Prophet of Islam, Muhammad, peace be upon him. Abdulla, however, still prefers not to condemn Macron or France and blames Erdoğan for what is going on. Abdulla’s tweet demonstrates two important factors.

One, it is a clear indication of anti-Islam sentiment by the UAE regime. The regime officials give open checks to all anti-Islamic actors worldwide. Second, anti-Erdoğanism made the UAE officials blind to regional and global developments.

Similarly, Muhammad Abdulkarim al-Isa, an adviser of Crown Prince Mohammed bin Salman (MBS) and also secretary-general of the Muslim World League, a nongovernmental organization (NGO) funded by the Saudi government, did not hesitate to show his support for Macron. He called Muslims living in non-Muslim countries not to react to political developments.

On the other hand, Europe stood by Macron, and many European politicians preferred to criticize Turkey and its leader Erdoğan. Erdoğan questioned Macron’s mental health and said that the French president has “lost his mind.”

Greek Prime Minister Kyriakos Mitsotakis said that “hate speech targeting France by the Turkish leadership is unacceptable (and) fuels religious hatred.” In other words, they do not question Macron’s hatred of Muslims and Islam.

Even though Muslims believe that any depiction of the Prophet Muhammad is blasphemous and they do not want the insulting cartoons to be shown or published, Europeans have been insistently using caricatures/cartoons drawn years ago. That is, the problem is not the discussion of freedom, but the political language that Europeans prefer to speak nowadays.

Europeans do not care about the concerns of Muslims worldwide. It should not be forgotten that their use of radical and negative political discourse against Islam and Muslims will be counterproductive because their claims do not reflect reality but rather their misperceptions.

Today, Islam is the only belief system in the world that the European colonial powers could not change. Therefore, ambitious, shallow and arrogant European politicians such as Macron have been trying to initiate a reform process in Islam.

In other words, they intend to demolish the basic source of dynamism in Islam. They have been trying to do the same thing with different instruments and with different methods. France or Macron cannot achieve much in the Middle East depending on the personalistic regimes, namely the UAE and Saudi Arabia. The peoples of the Middle East as well as French Muslims will continue to react to French hostility toward Islam and Muslims.