Turkey: Defender of the desperate 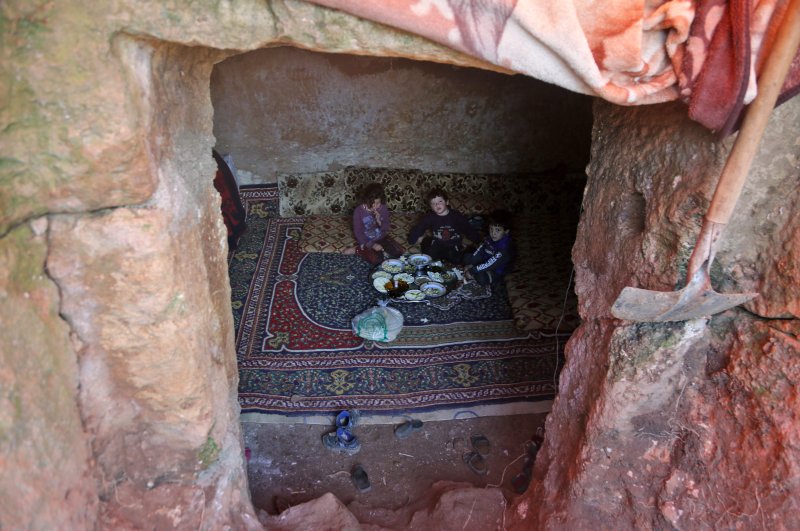 A family of internally displaced Syrians eats together in an underground shelter where several families from Aleppo and Idlib provinces are taking refuge in the village of Taltunah, about 15 kilometers northwest of Idlib city in northwestern Idlib province, Feb. 23, 2020. (AFP Photo)
by Nagehan Alçı Feb 29, 2020 12:05 am
RECOMMENDED

The escalation of violence in Idlib has been gradually worsening as Russian-backed Assad regime forces continue to threaten regional peace and security. Early Friday morning, 33 Turkish soldiers who were taking part in the Turkish Armed Forces' (TSK) ground offensive to stop regime violence against civilians were killed in a deadly regime airstrike, while 32 others were wounded. Turkish retaliation for the attack continues to pound regime forces, while the international community, including NATO and the EU, released statements of condemnation in a show of support for Ankara. However, it is safe to say more is needed to solve this bloody crisis and a common, global counter-solution mechanism is the only path for success as regime brutality, the strongest obstacle in establishing regional safety, continues to put thousands of civilian lives in danger.

Let’s talk about undeniable figures. According to the United Nations, 900,000 people have fled the Idlib region since December. They have been running away from Assad offensives backed by Russia.

Some 500,000 out of the 900 000 are children; most of the remaining 400,000 are women or elderly. They are waiting near the Turkish border in horrible conditions. There is a scarcity of food, and the weather is extremely cold. Mothers are afraid that their children might freeze and burn everything they can find to provide heat to combat the freezing temperatures.

Russian and Syrian planes are bombing civilian targets in an attempt to frighten the people into obedience. There is a human tragedy going on, and Western governments choose to turn their backs. It is very sad.

Yesterday, The Washington Post issued an editorial saying that Turkey is the only defender of these desperate people. The editorial reiterated that President Recep Tayyip Erdoğan has stressed the launch of an offensive against Assad forces unless they pull back by the end of this week.

Talks are ongoing between Russia and Turkey with no clear results; however, clearly, as the Post also pointed out, Turkey is trying to prevent a massacre. It is not an easy task. We are talking about one of the strongest armies in the world, the Russian army. It is also the most relentless army.

Turkey still aims to establish a safe zone covering 20 miles from the border for civilians where they will have access to humanitarian aid. The country already hosts almost 4 million refugees. Ankara is struggling to support them, so what will happen to the newcomers, and how will this flow of immigrants be stopped?

Erdoğan seems to have convinced Russian President Vladimir Putin to support a safe zone area, but there are no signs that the offensive will stop any time soon. The U.S. and European governments should take responsibility and finally be present to pressure the regime.

On the other hand, the regime should step away from Turkey’s military observation points as soon as possible; otherwise, the situation will be tense between Turkey, the Syrian regime and Russia. Erdoğan said, “We are planning to save our observation posts from the besiegers one way or another by the end of this month.”

There are 12 Turkish observation posts located in Idlib province in accordance with a 2017 agreement with Russia and Iran. Obviously, Syria and Russia are violating the Sochi and Astana agreements. So far, several dozen Turkish soldiers have been killed by the assaults, and frustration and anger on the Turkish side continue to grow.

Talks between Turkey and Russia are ongoing and although not confirmed by either side yet, there have been reports of plans to organize a meeting between Erdoğan and Putin on March 5 in Istanbul.

The responsibility of protecting the lives of millions of innocent civilians lies on the shoulders of all world leaders, but it seems Turkey is the only one to actively trying to do so. The international community should wake up for Idlib; otherwise, many more women and children will pay the price.