Why did Hagia Sophia open to worship? 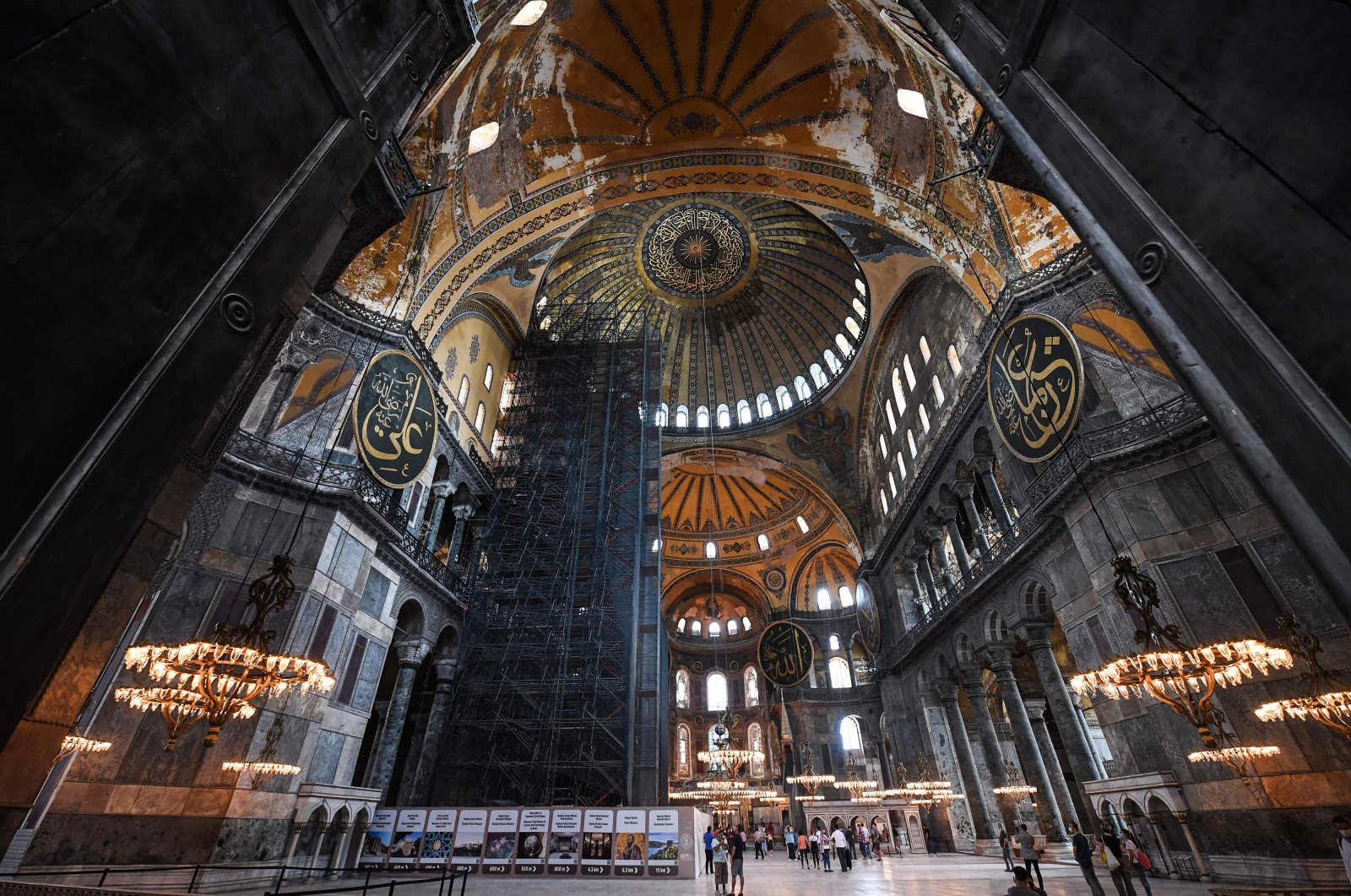 I spent my childhood days in the narrow streets of Istanbul’s historical peninsula. My father, a draper by trade, had a small shop located in an old, Armenian-owned building just down the hill from the Grand Bazaar. As an elementary school student, I would spend my summer holidays there, often bored by the constant traffic of merchants, seeking some relief on the cobblestone streets dripping with history. Over time, my familiarity with Istanbul’s streets grew, thanks to countless walks with my peers visiting from elsewhere, and I became a sort of self-styled tour guide.

Back in those days, when it was nothing extraordinary for 10-year-old children to wander around by themselves, our walking tour would begin with a visit to Topkapı Palace’s enormous campus. We would wonder at the shirts of past crown princes, decorated with Arabic prayers, walk around the holy relics respectfully and make childish jokes about the Spoonmaker’s Diamond. Following a tour of the palace grounds, we would find ourselves at the Basilica Cistern and eventually, the Hagia Sophia.

Once inside, we would gaze at the massive plaques, hanging next to indescribable frescoes and the building’s glorious dome before making our way upstairs. Whenever I walked those paths, originally designed to facilitate carriages, I would imagine myself going on an adventure. Yet whenever the party left the Hagia Sophia and headed to the Gülhane Park, the visitors would ask the same question: If the Hagia Sophia was a mosque, with its minarets and minbar, why weren’t we allowed to pray there?

A proper answer to that seemingly simple question eluded me for many years. I remember quite clearly the mid-1990s when Turkey’s conservatives would engage in heated debates about the Hagia Sophia. The huge gap between the popular expectation, that the museum should be converted into a mosque once again and the policy of successive governments was quite obvious. Turkey’s elected leaders simply ignored this demand, people used to say, because they were intimidated by international pressure. “The foreign powers,” the conclusion went, “do not allow it.” In other words, the Turkish people long viewed the Hagia Sophia debate as a question of national sovereignty. For them, it was a matter of honor. The Hagia Sophia, therefore, is not just another mosque for many Turks. The ideas of freedom, independence and sovereignty are etched into the ancient temple’s spiritual value in our collective memory.

The Turkish people had to wait until July 10, 2020, for permission to pray at the Hagia Sophia once again. The Council of State reviewed a petition and ruled that the 1934 Cabinet decree, which resulted in the mosque’s conversion into a museum, was against the law. President Recep Tayyip Erdoğan proceeded to issue a decree minutes later to announce that the Presidency of Religious Affairs (Diyanet) would manage the Hagia Sophia, which would open its doors to worshippers.

This decision, which even Turkey’s opposition parties promptly welcomed, faced backlash from foreign governments, including Greece. Yet their complaints have no impact whatsoever on the Turkish people. Turkey has already taken an irreversible decision.

Why now? Some observers believe that the decision reflected electoral considerations. Provided that Turkey has no elections scheduled anytime soon, that claim must be dismissed as superficial and misleading. If anyone wonders how the same experts account for that decision, they will surely respond differently. Here are my two cents: Take a look at all the decisions that Erdoğan has taken over the last 18 years. Without exception, he waited for the right time to pull the trigger. The controversial headscarf ban, which affected members of Erdoğan’s own family, was not abolished until his sixth year in power. Instead of acting immediately, the Turkish leader waited for the people to reach a consensus. The same goes for the Hagia Sophia: Erdoğan waited 18 years to welcome worshippers into that ancient temple. That decision demonstrates that Turkey, as a sovereign nation-state, finally has enough self-confidence to ignore international pressure and foreign governments’ opinions on Ankara’s sovereign decisions and is prepared to take unilateral action when necessary.

Turkey’s recent moves to protect its vital interests in the Eastern Mediterranean, too, reflects this view. From northern Syria to Libya, the country looks out for its own interests and defends its rights as a sovereign nation. Indeed, the decision to reinstate the Hagia Sophia as a mosque goes hand in hand with Turkey’s policy on the Eastern Mediterranean. At the heart of both actions are Turkish sovereignty and the Turkish people’s expectations.

Will the Hagia Sophia close its doors to the rest of the world? The answer is no. Here’s what my sources had to say: The Hagia Sophia has been reinstated, but worshippers will pray in the middle, where prayer rugs will be placed. Turkish and foreign tourists will be able to walk around that section. The Christian frescoes, too, will remain in place. According to Islamic rules, there can be no paintings, sculptures or other figures where Muslims pray. Sources say that several options were on the table, but the authorities are most likely to cover the mosaics with an automated curtain during prayers. Once the prayer service is finished, the curtains will be reopened and visitors will continue to enjoy the artifacts.