A message to Israel on its illegal settlements 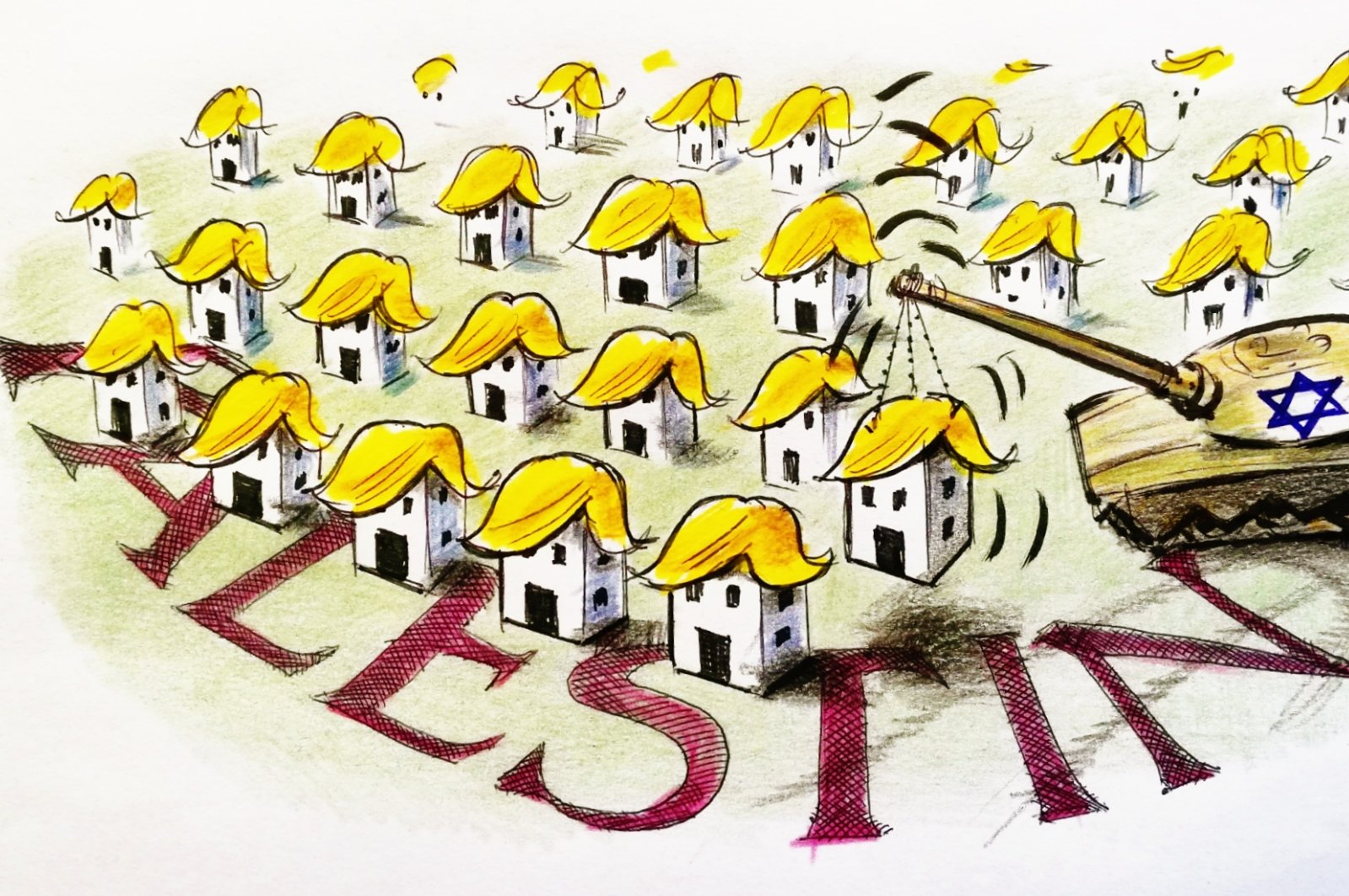 There was outrage in Israel last month after the U.N. human rights office released a list of more than 100 companies it said were complicit in violating Palestinian human rights by operating in Israeli settlements in the occupied West Bank, as part of the first-ever international attempt to name and shame businesses – drawing the fierce ire of Israeli.

The list was released after delays started to escalate a looming showdown between Israel and the international community over its more than half-century policy of building settlements in the West Bank.

Emboldened by the new U.S. Mideast initiative, Israeli Prime Minister Benjamin Netanyahu has vowed to annex Israel's more than 100 settlements, while the chief prosecutor of the International Criminal Court in The Hague has indicated she will soon launch a war crimes investigation into settlement policies.
Well-known companies

In a reflection of how entrenched the settlements have become, the list is dominated by Israeli companies, including leading banks, construction companies, supermarkets and mobile phone operators. These are joined by a plethora of international companies, including travel firms like Airbnb, Expedia, TripAdvisor, Booking.com and Opodo.

Other names include consumer food giant General Mills, tech and communications giants Motorola Solutions and Altice Europe, infrastructure companies like France's Egis and Alstom, and British construction hardware firm JCB.
The list names 112 business enterprises – 94 Israeli and 18 internationals – that have ties to illegal settlements and are involved in the supply of equipment and materials facilitating the construction and the expansion of settlements, the barrier wall and an assortment of other infrastructural projects. Many of the supplies include surveillance and identification equipment for settlements and checkpoints, as well as those that contribute to the demolition of housing and property, agricultural lands, greenhouses, olive groves and crops.

The list also included third parties offering security services, equipment and materials and transport to enterprises operating in settlements. Meanwhile, a number of banking and financial groups are featured, whose work has helped develop, expand and maintain settlements and their activities, including loans for housing and development projects and the use of natural resources, in particular water and land, for business purposes. In many cases, this has a direct contribution to pollution and the dumping of waste in nearby Palestinian villages.

At the same time, Palestinian financial and economic markets are held in a state of captivity – and the practices listed above disadvantage Palestinian enterprises, already crippled by restrictions on movement and administrative and legal constraints.

Although the vast majority of the world considers Israel's settlements illegal, this U.N. report has stopped short of accusing the companies mentioned of violating international law – and instead, aims to pressure them by drawing negative attention to their ties to much-maligned policies.
The UN's role

High commissioner of the council, Michelle Bachelet, released a statement in line with the release of the report, saying she was “conscious this issue has been and will continue to be, highly contentious.”
“However, after an extensive and meticulous review process, we are satisfied this fact-based report reflects the serious consideration that has been given to this unprecedented and highly complex mandate, and that it responds appropriately to the Human Rights Council’s request contained in resolution 31/36.”
In 2016, the U.N. Human Rights Council adopted resolution 31/36 requesting the OHCHR produce a report investigating the “implications of settlements on the civil, political, economic, social and cultural rights of the Palestinian people throughout the Occupied Palestinian Territory, including East Jerusalem.”
The Human Rights Council instructed the U.N.'s human rights office to create a "database" of companies deemed to be linked to or supportive of the settlements. Beginning with a potential list of over 300 companies, it narrowed the list down to 112 firms involved in practices that had raised human rights concerns, such as settlement construction, security services, banking and equipment used to demolish Palestinian property.
Israeli response
Although the report does not call for sanctions or have any concrete impact on the companies, Israeli officials accused the report of caving in to pressure from the grassroots Palestinian-led boycott movement against Israel and raised concerns that the list could be used as the basis for boycotts and other economic pressure against the companies mentioned.
As an initial response to the list, Israeli Prime Minister Benjamin Netanyahu decided Israel would freeze any ties to the U.N. human rights office headed by Bachelet, reasoning that she was serving the interests of the Boycott, Divestment, Sanctions (BDS) campaign against Israel. Said Netanyahu: "Whoever bans us, we will, in turn, ban them."
"The U.N. human rights office is a biased organization with little to no influence whatsoever. I have already instructed to cut all ties to this organization, with the government in America doing the same," Netanyahu said, adding, "Over the past few years, we have pushed for several bills to be legislated in the U.S. stating that America will act against all those who call to ban Israel, just like this meaningless organization that acts against Israel instead of dealing with true human rights violations."

The prime minister concluded by stating: “Instead of the organization dealing with human rights, it only tries to disparage Israel. We strongly reject this contemptible effort."

With broad international backing, the Palestinians claim the West Bank and East Jerusalem as parts of a future independent Palestinian state. Israel, which captured both areas in the 1967 Arab-Israeli War, has annexed East Jerusalem – a step that is not internationally recognized – and has said that the country had no intention of dismantling any of its West Bank settlements. Nearly 600,000 Israelis live in the West Bank alongside about 2.9 million Palestinians.

Israel and the U.S. regularly accuse the Human Rights Council of anti-Israel bias, with the Trump administration withdrawing the United States' participation in the group's efforts in 2018 – faulting the U.N. for accepting the participation of autocratic governments that the administration said had repeatedly violated human rights.

The rights council is made up of 47 governments, with countries like Libya, Venezuela and Somalia among its members. The overwhelming majority of resolutions passed by the council has focused on Israel and its treatment of Palestinians, with Israel being the only country in the world whose policies automatically face scrutiny at every council session.

For decades, the U.S. joined the rest of the international community in criticizing settlement construction. That began to change after President Donald Trump took office in 2017. Surrounded by advisers with close ties to the settlement movement, Trump took a more sympathetic line toward Israel and halted the automatic criticism of settlements of his predecessors.

Last November, the U.S. said it did not consider settlements illegal and last month, Trump unveiled a so-called "Deal of the Century" peace plan that would allow Israel to retain permanent control over large parts of the territory, including all of its settlements.

Emboldened by the Trump plan, Netanyahu has vowed to soon annex the settlements – a step that International Criminal Court chief prosecutor Fatou Bensouda has warned against as she prepares her decision on whether to open a war crimes inquiry. Meanwhile, under U.S. pressure, Netanyahu has put off his annexation plans until after the March 2 Israeli elections.
The Palestinians, along with most Muslim and Arab countries, have rejected Trump's plan, while others have expressed little support, remaining opposed to the settlements.
The rights council had never before requested such a list scrutinizing corporate activity. The report said its authors had communicated directly with the companies to allow them to defend themselves or inform the council of a change in policy. The report's authors called on the council to set up "a group of independent experts” to update the database each year.
Human Rights Watch, a vocal critic of the settlements, applauded the report, with the group's deputy executive director Bruno Stagno saying: “The long-awaited release of the U.N. settlement business database should put all companies on notice: To do business with illegal settlements is to aid in the commission of war crimes." Meanwhile, the BDS movement in a statement called for action against the companies. “These companies must be held to account, including through strategic boycotts and divestment campaigns."
The list was potentially a serious blow to Israel, as its publication comes after U.S. President Donald Trump announced his so-called peace plan and less than a month before the March 2 elections in Israel. On the other hand, the list will put immense pressure on international companies whose operations are located in the illegal settlements of the West Bank, and may force them to choose to stop their operations there or to stop their operations in Israel altogether.
The U.N. report was released a day after Palestinian Authority President Mahmoud Abbas addressed the U.N. Security Council, rejecting Trump's peace proposal, which envisions a disjointed Palestinian state that turns over key parts of the West Bank to Israel and favors Israel on key contentious issues including borders, the status of Jerusalem and Jewish settlements.
The proposal was made without the input of Palestinians, who broke off ties with the Trump administration after it controversially recognized Jerusalem as the capital of Israel in late 2017.

The list is a clear statement of the U.N.'s position on the West Bank, effectively saying that the enclave is not a part of Israel and that all Israeli activity there is illegal.