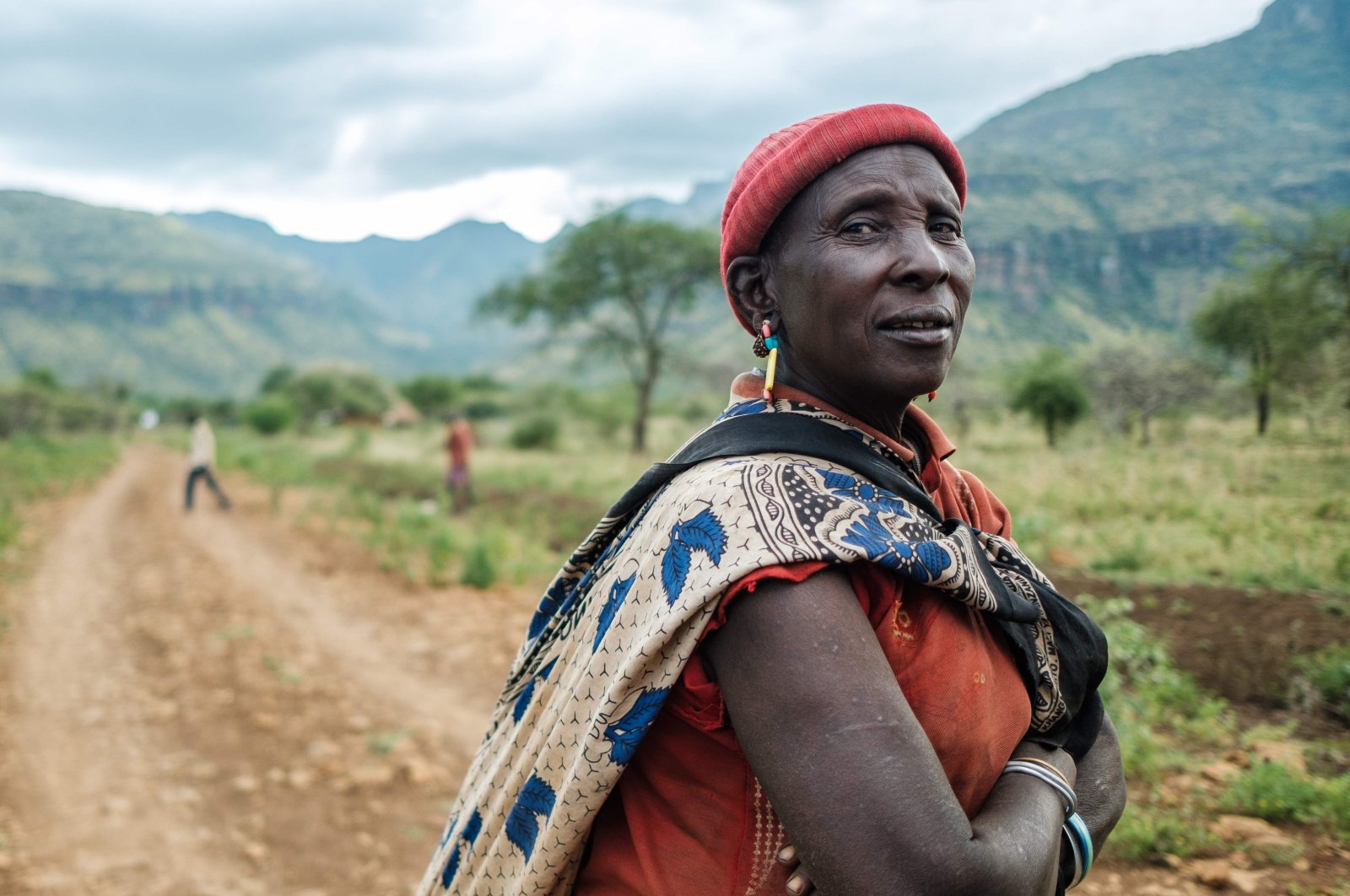 Some of the representative maps of Africa, drawn in the past centuries, show caravan routes, especially in the north of the Lake Chad Basin. These were routes used for commercial purposes in general before the seventh century when Islam started to spread across the continent.

Later on, the pilgrimage caravans, also undertaking an important journey, were added to this. Even on these maps, meeting and resting places for those crossing the Sahara through the Mediterranean coast or for those traveling from West Africa to the Red Sea were marked.

Those seeing the maps of the huge continent for the first time realize that a remarkable part of these elements is connected like a web.

For centuries, as a tradition passed down from generation to generation, all African societies used these transportation networks.

Shortly before the 20th century, this tradition suddenly disappeared due to the partition of the continent among the most ruthless colonists in 1885, who took over the lands instead of laying a verbal claim of occupation.

Many people believe that division into 54 countries is the destiny of Africans; in fact, this idea has been imposed by European colonists.

The rest of the African borders have passively been drawn by European colonists such as Belgium, Italy, Portugal, Germany and Spain in their capitals. Therefore, the connections of all historical caravan routes dating back to ancient times were broken.

In other words, it may be acknowledged that the greatest experience of humanity, which is impossible to obtain again, was destroyed.

At the same time, even if their numbers are small, those with experience in various parts of the country may be able to redefine these historical practices.

One of the greatest atrocities faced by Africa was new, unnatural borders based on colonized regions. As a result, the historical caravan routes, which should have been secured, were eradicated.

If there is a paradoxical matter, it might be that Europeans executed all of the destruction in an era in which they also set up a settlement under the umbrella of the European Union.

On the one hand, Europeans were finding solutions to their cleavages, on the other hand, they created invisible walls between regions of Africa that are almost impossible to overcome.

As it did not fit the realities of the natural order in Africa, synthetic borders drawn by colonial officials concerning mountains, plains, and rivers have damaged the existing life.

Trade in the line

In short, the traditional order established between people was not allowed to evolve according to the conditions of the age.

However, besides the known raw materials needed by all industrial branches in today’s world, the indispensable products of the food industry such as gum, Arabian coffee, shrimp and cola are missing from the local circulation.

The issue was not just about putting an end to the caravan routes, the trade made through them and the pilgrimages that took place with them. Something even stranger is that European travelers, missionaries, soldiers and many scientists such as historians, geographers, ethnographers and geologists who acted with them achieved their goals after they wandered across the continent and got to know all there is to destroy.

The deadly touch of colonialism could not be restored with the independence gained in the 1960s. It can be claimed that when the bipolar world order collapsed in the 1990s, African countries finally began to take a fresh look at the environment.

Despite the mass atrocities conducted in Rwanda, it participated in the establishment of the new ecosystem in the country and quickly became one of the pioneers.

Now, these borders between countries, where perhaps even the minimum manipulation with their existing structures can cause serious conflicts, have been made more transparent and easily crossed. Even though the borders of the free trade zone include 54 countries, the heritage of historical caravan routes will be revived.

Even though countries’ growth rate, which was about 10% as of the 2000s, has been affected by global economic turmoil, maintaining an average growth rate of 4% is an achievement.

Furthermore, intercontinental investment networks are now replacing the continental caravan routes that continued even in the 19th century.

As of 2020, in rankings announced by several international organizations, the Ivory Coast leads the list of African countries that receive direct foreign investment. This is followed by Kenya, Ghana, Senegal, Rwanda, Ethiopia, Nigeria, Morocco, the Democratic Republic of Congo and the Republic of South Africa. Experienced statesmen such as Alassane Ouattara, who worked at the World Bank for many years, made a great contribution to this success. Some huge projects are being implemented both in these and other countries.

Africa's population statistically is now moving toward 1.4 billion. Moreover, it is estimated that within 30 years, it will surely surpass 2.5 billion by 2050, with an increase of around 43 million each year. While one in 13 people in the world population in the 1960s was African, in 2020 one in six now live on the continent.

To meet the ever-increasing needs of the continent, the statesmen have mobilized all resources to attract foreign direct investors to their countries to secure the future.

Numerous megaprojects related to railways, highways, dams, fossil resources as well as renewable energy sources have either been completed or are under construction. Besides, new ones are in the phase of implementation.

There are giant projects being conducted within individual countries along with other projects like the Common Market for Eastern and Southern Africa (COMESA) that have invested billions of dollars to connect several East Africa and South Africa regions with highways and railways.

For instance, in Tanzania, the Bagamoyo port project, which is expected to be completed by 2045 by a Chinese company and has a capacity of 20 million container loading and unloading per year with a budget of $11 billion, may be seen as a major investment.

Again, the contract price of the Lagos-Calabar railway project built in partnership with China in Nigeria exceeds $11 billion. A project with a similar capacity to the hotly debated $4.8 billion Grand Renaissance Dam in Ethiopia is the Inga Dam in the Democratic Republic of Congo. The Renaissance Dam's construction came under fire as it would threaten the fair sharing of the waters of the Nile while it was still in the project phase.

It is claimed that the new dam will generate 39,000 megawatts (MW) of electricity annually and contribute $100 billion to the country's economy by 2025. Also, the Jasper Photovoltaic Park, which was established in South Africa in the mid-2010s, produces 180,000 MW of electricity per year.

We see a number of other such projects in the continent, such as the expansion of the Suez Canal in Egypt and the new cement factory established with an investment of $4.3 billion in Nigeria that will produce 100 million tons of cement for 15 countries in the region.

In 2013, the total budgets of international direct investments in different African countries were over $220 billion. The Diamniadio Valley project in Senegal, whose construction continues rapidly, is considered among the biggest projects on the continent.

When finished, it is aimed to have an impact that extends across borders like Silicon Valley. Similarly, in addition to the construction of modern cities, new railway networks are being established in countries such as Nigeria, Kenya, Ivory Coast, South Sudan, Rwanda and Uganda instead of caravan routes.

The main aim was to connect these giant projects in a network. The number of large projects, which were reported as over 700 in 2014, have approached 800, with an increase of more than 15% in a year, including those with a contract price of $50 million in 2015. Their total cost is estimated to be hundreds of billions of dollars.

Besides, Africa is now one of the two regions attracting foreign direct investment from across the globe. There are huge investments in important sectors such as the food industry, health and education, and infrastructure projects.

In 2018, African ecosystem technology hit the highest record in its history. New entrepreneurs generated $1.3 billion in financial support in 2019 in the continent, exceeding the aim of $1 billion. China and the European Union have been paying more attention to this area due to its potential.

Turkey, which made its first comprehensive engagements with the African continent in 2005, has reached a total trade volume with African countries of $25 billion. This progress has been noticed by those who follow the continent closely.

In recent years, Turkish Airlines (THY) has introduced flights to 60 destinations in 40 countries, including major cities such as Lagos, Douala and Cape Town along with the capital cities.

It is also important to point out that some African airports are built and even operated by Turkish companies. The number of companies that construct and operate hotels, congress centers, roads, railways and industrial facilities is increasing day by day.

It should be noted that if some still disregard the African continent's potential, it is highly probable that they either have no contact with our businesspeople working with African customers or those who do not wish to travel to the continent despite the opportunities. Maybe such people are unable to get rid of the opposition reflex.