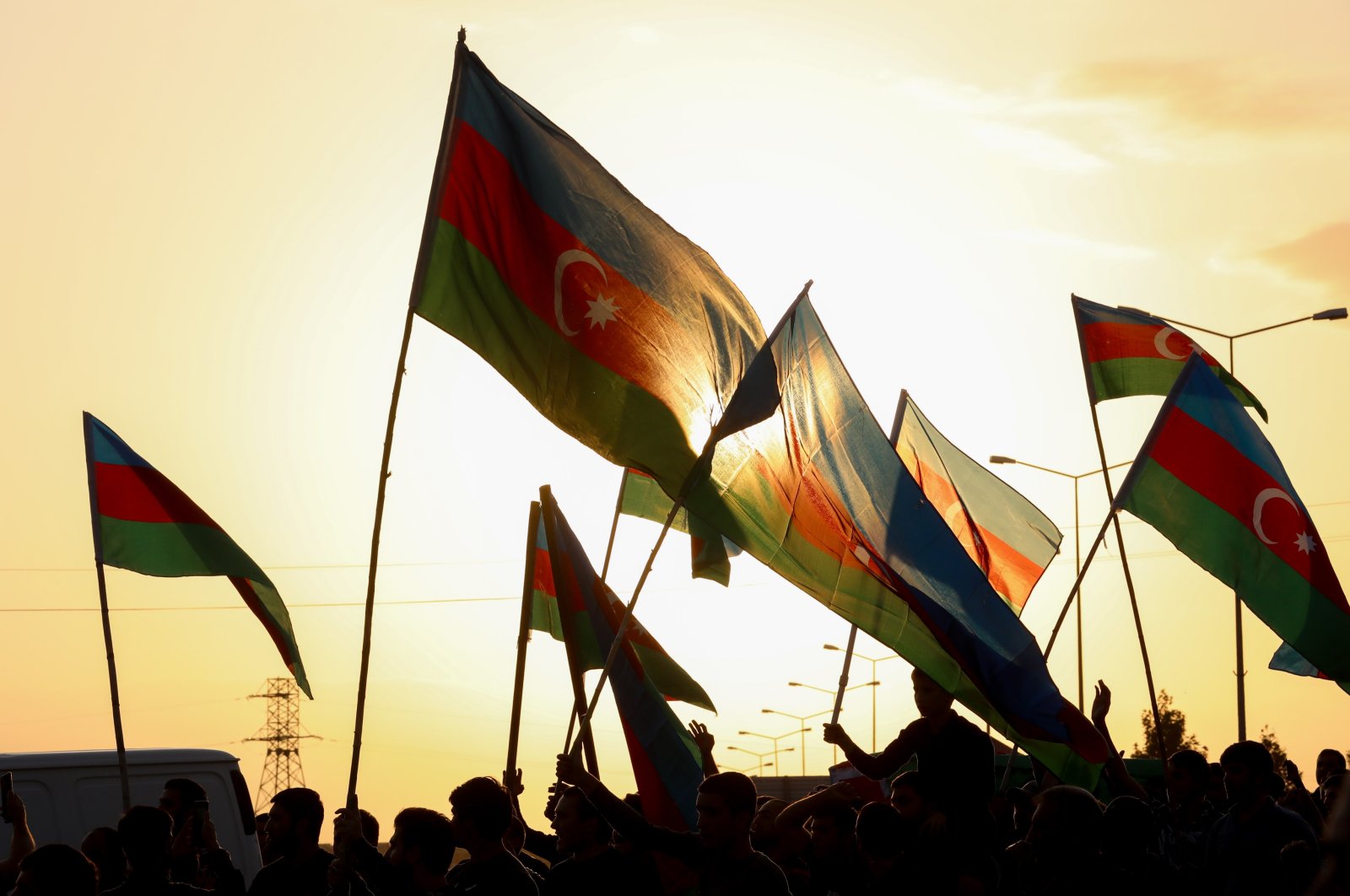 People wave flags at the funeral of a member of Azerbaijani military, who was killed by Armenian shelling in the Tartar border district of Azerbaijan, Sept. 29, 2020. (Photo by Getty Images)
by Seymur Mammadov
Oct 01, 2020 12:05 am

Last week, the armed forces of Armenia, having carried out large-scale provocations, conducted intensive shelling on the positions of the Azerbaijani army along the entire front line and settlements located in the front-line zone using large-caliber weapons, mortars and artillery installations of various calibers.

As a result of the intensive shelling, many civilians were killed and wounded in villages including Gapanly in the Terter region by Armenia, Chiragly and Orta Gervend in the Agdam region, Alkhanly and Shukurbeyli in the Fizuli region and the Jojug Marjanli in the Jebrail region. Serious damage was inflicted on civilian infrastructure. In order to suppress the combat activity of Armenia and ensure the safety of the civilian population, the command of the Azerbaijani army decided to launch a counteroffensive operation along the entire front.

Starting from Sept. 27 until last Thursday, about 2,300 Armenian servicemen were killed and wounded, about 130 tanks and other armored vehicles, more than 200 artillery installations, multiple launch rocket systems, grenade launchers, about 25 air defense systems, 6 command posts were destroyed and disabled management and command and observation posts, 5 ammunition depots, about 50 anti-tank weapons, 55 vehicles. During yesterday's battles on the territory of Shushakend in the Khojaly region, one S-300 anti-aircraft missile system was destroyed.

The Azerbaijani side, in turn, reported 19 injured civilians as a result of shelling from the Armenian side. As a result of the shelling of the Armenian Armed Forces, five members of one family were killed in the village of Gashalty, Naftalan region.

The current escalation is the most serious since the 1992-1994 war. In fact, we are talking about a full-scale war – hostilities are being conducted along the entire line of contact. As a result of the decisive counteroffensive of the Azerbaijani army, seven villages in the Jebrail and Fizuli regions, as well as strategic heights, were cleared of the invaders. In particular, the villages of Garakhanbeyli, Garvyand, Horadiz, Yukhary Abdulrahmenli, Fizuli region, Jabrayil region – Boyuk Myarchanli and Nyuzgar were liberated. Enemy posts located in the direction of the Agderinsky region and on the heights of the Murovdag ridge were defeated, a number of dominant heights were taken under the control by the Azerbaijani army.

As for the reaction of the international community, U.N. Secretary-General Antonio Guterres called on Yerevan and Baku to immediately stop fighting, reduce tensions and return to negotiations, the secretary-general's spokesperson Stephane Dujarric said.

In turn, the Russian Foreign Ministry called on the parties to immediately implement a cease-fire and begin negotiations to stabilize the situation. Then, Prime Minister Nikol Pashinian called Russian President Vladimir Putin and asked him to intervene in the conflict and take measures to de-escalate it.

NATO called on the conflicting parties for a peaceful settlement of the conflict and a cease-fire in Nagorno-Karabakh.

Iran expressed its readiness to mediate in the negotiations on the settlement of the Karabakh conflict. Iranian Foreign Minister Mohammad Javad Zarif wrote about this in his microblog on Twitter. Iran has repeatedly offered both sides its mediatory assistance in the settlement of the Karabakh conflict. In the April battles of 2016, the Iranian side was ready to take on this mission, but its initiative was simply ignored by the Azerbaijani side. Iran's interest in the mediation mission on the Karabakh issue is conditioned by Turkey's activation in the South Caucasus. Tehran's involvement in the conflict may be beneficial to Yerevan but not Baku.

Because Iran has been supporting Armenia in every possible way for many years. Moreover, facts have been made public, testifying to the delivery of fuel to occupied Karabakh in Iranian vehicles and the opening of companies by Iranian citizens in the occupied territories of Azerbaijan. Last fall, the names of 80 Iranian companies investing in Nagorno-Karabakh were announced. Tehran has not made any official statements yet about taking action against these companies.

Despite the clashes, Armenia does lacks the resources to engage in a full-scale and long-term war. Since the economy of Azerbaijan is quite stable, the prospect of military operations in all areas of the Karabakh conflict zone to the bitter end is not a costly task for Baku in terms of both human and financial resources. Azerbaijan pursues a single goal in this conflict – the liberation of its occupied territories.

Nevertheless, the risks of the continuation of the conflict remain relevant. Firstly, Armenia has introduced martial law and announced a general mobilization. Azerbaijan has also introduced martial law. Secondly, Armenia will try to reclaim the territories liberated by Azerbaijan. Pashinian now wants to "recoup" Azerbaijan's operation, given his difficult position in the domestic political arena. Will he be able to do it? I strongly doubt it.