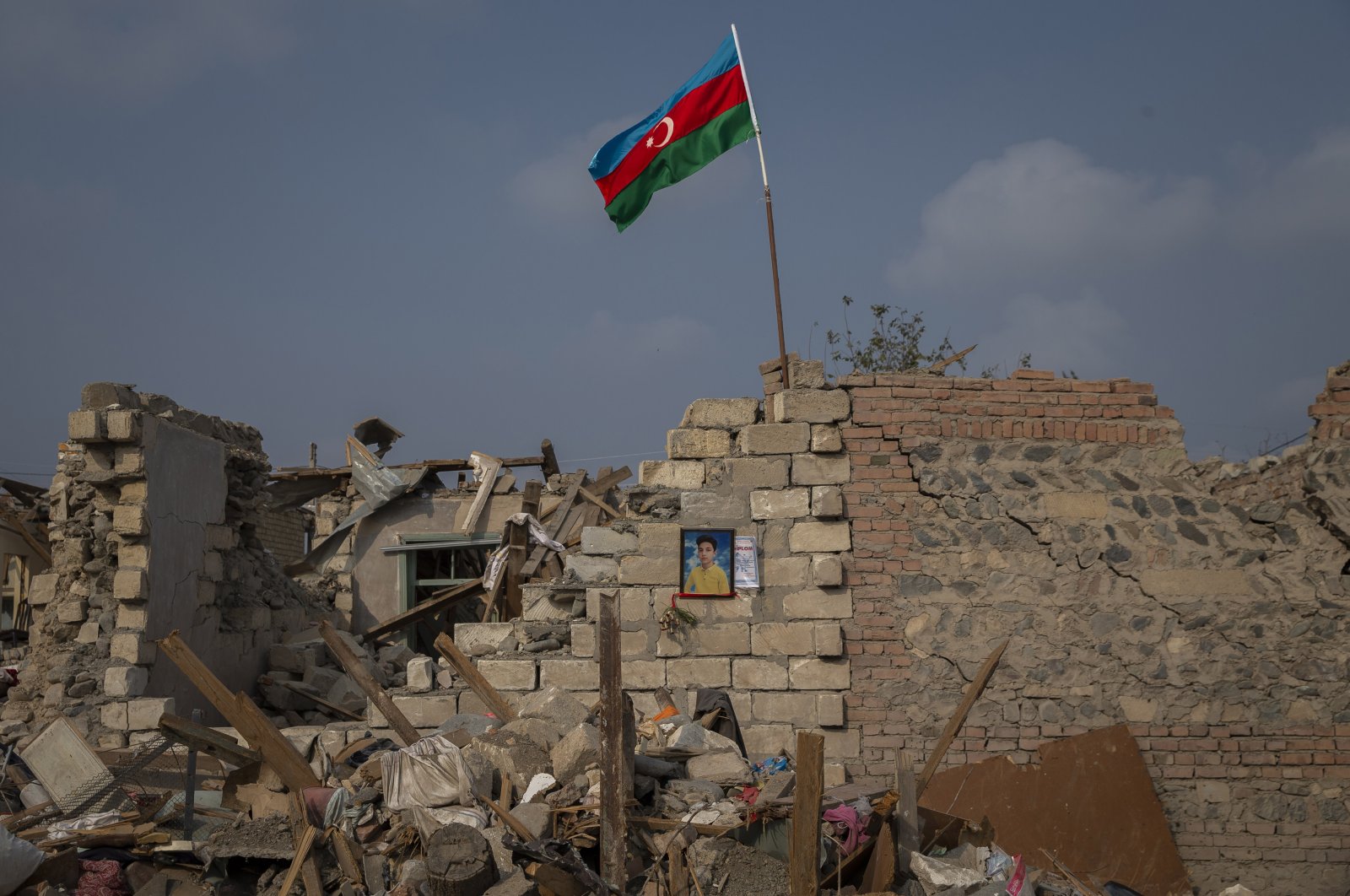 A picture of a boy killed in Armenian attacks hangs on the wall of a damaged building as an Azerbaijani flag waves on the rubble above, in the Azerbaijani city of Ganja, Nov. 5, 2020. (AA Photo)
by Arshi Khan
Nov 06, 2020 12:05 am

In the midst of epistemological ambiguities mostly created by Promethean, Homeric and Utilitarian liberal paradigm, the most vulnerable things today are reason, fact and humanity. Western liberal set of values have for long claimed themselves as universal in nature but they have again lost themselves in the darkness of self-justification. Their kind and degree of theorizing have created a stereotype that is followed, often deliberately and unconsciously, by many. This has developed a pattern and paradigm to look into questions and answers. Therefore, it is not very difficult to portray a picture of preference and choice.

As a result, the domain of knowledge and realities gets adversely affected, appearing like "Plato's allegory of the cave." The West today is no more a reference point for epistemology because it has particularised its views and opinions.

Very recently, the response of the Western world, particularly the European Union, to the Eastern Mediterranean and the Caucasus has made their stance abundantly clear. Their intellectuals, institutions and media have shown a particular inclination and orientation. They accept the Armenian narrative without thorough investigations and research.

On the other hand, they continue to make a systemic conceptual error by doubting the actions of Turkey and Azerbaijan. So they cast doubt on issues relating to Turks and Muslims and correspondingly come up with ambiguous explanations and solutions.

Having been aware of the Caucasian and Turkish issues for over two decades, I see a dichotomy between the facts and narratives. There are several examples in the past and present where the voices of victims were either shelved or tagged as terrorism. This is why attempts to get back occupied territories in the Nagorno-Karabakh region were termed as terrorism by Armenia, which has already mastered the act of labeling the relocation of Armenians from eastern Turkey in mid-1915 as genocide with highly exaggerated numbers. Facts exist in history but not the "stolen ones." Similarly, the Western media and their followers depict the occupied areas of Azerbaijan (20% of its territory), Nagorno-Karabakh in particular, as dominantly and ethnically Armenian which is similar to reading a letter without opening the envelope.

The situation in the South Caucasus is very peculiar. Azerbaijan and Armenia are engaged in war but the former is using its military forces within the occupied territories. Armenia which did not recognize Nagorno-Karabakh's so-called independence has done all kinds of homework for its illegal annexation. Nagorno-Karabakh both as an independent territory or its unification with Armenia are direct threats to Azerbaijan's territorial sovereignty. Return of territories to Azerbaijan and the dignified settlement of about a million internally displaced Azerbaijanis in the liberated places with an autonomous Nagorno-Karabakh can be a viable solution.

Azerbaijan's claims over the areas termed as disputed are parts within the defined borders of Azerbaijan confirmed by four U.N. Security Council (UNSC) Resolutions in 1993 with two U.N. General Assembly Resolutions, in addition to the road-map for peace attempted by the Minsk Group of the Organization for Security and Co-operation in Europe (OSCE) in 1997 and 2005.

Thousands of Azerbaijanis have lost their lives along with ancestral dwellings, properties, cultural, health and other institutions and faced humiliations from 1988-1994. The atrocities committed by Armenians are still fresh in the minds of the displaced people who want to return to their homes. This aspect remains largely ignored.

The other aspect is the ethnic composition of the Nagorno-Karabakh. Historically, it was a dominant Azerbaijani/Turkish area including the long southern belt of Russia. According to Russian sources, there were 43% Azerbaijanis or Muslims in the present Yerevan in 1917 who owned most of the lands. There were 160,841 Azerbaijanis in 1989. The number was reduced to just 25 or 100 a few years later. The present Armenian territory had 80% Muslims (Azerbaijanis, Kurds and Persians) in 1823. This is not a case of volitional migration and needs to be explored.

Nagorno-Karabakh was also acknowledged as a part of Azerbaijan by the Bolsheviks. All attempts by the Armenian side for the unification of the Nagorno-Karabakh were rejected by the Soviet authorities although Russians were very much pro-Armenian, right from their prominence in the Caucasian region vis-a-vis the Persian influence due to the 1823 Treaty of Gulistan.

There were only 8.4% Armenians in the Karabakh in 1823 and Muslims mostly Azerbaijanis made up 91% of the region's population. The Armenian population rose to 34.8% in the Karabakh region by 1832. Armenian scholar George Bournoutian says that 45,207 Armenians immigrated to the Khanate of Erevan during 1829-1830 from Iran and the Ottoman Empire.

Russians occupied parts of Erivan Khanate in violation of the Treaty of Gulistan. Russians took over the Nagorno-Karabakh in 1822 and recognized the Karabakh ruler Ibrahim Khalil Khan. The Russian control was decisively confirmed with Iran by the Treaty of Turkmenchay, 1828. This might have caused displacement and violence. Azerbaijani ethnic dominance remained intact in the 1890s at 25% in 1988. This percentage was reduced to zero in Nagorno-Karabakh in 1989. This fact-sheet demands more research about their ethnic erosion.

Philip Remler, director of the International Peace Institute (IPI), says the U.S. has given a chronological account since 1987 in the context of Nagorno-Karabakh. Militant nationalist Armenians from the mainland and abroad have settled in Nagorno-Karabakh. Thus there is a series of incidents since 1823, Azerbaijanis (who were called Tatar by Europeans until recently) experienced deaths, displacements, deportations and humiliations. All regimes in Russia led by the Czar or Bolsheviks or the federation today have been supportive of Armenians due to their political rivalry with Persians and Ottomans. After the Soviet downfall, the Western world sided with Armenians due to the Turkish and religious factors.

Systematic measures of demographic engineering, in favor of Armenians, are the main sources of the problem between Armenia and Azerbaijan. The Nagorno-Karabakh enclave has a 150,000 settler population originating from Armenia and Western countries. Armenians have political problems with the Turkish Republic but they are taking revenge against Azerbaijan. Azerbaijan has two autonomous regions (Nakhchivan and Nagorno-Karabakh) and the autonomy is meant for affirmative development policies approved by the central government. Autonomy cannot be the criteria for declaring unilateral independence except in the case of holocaust, genocide, or massacre.

Armenian sympathy with "settler Armenians" in the Nagorno-Karabakh enclave is one thing but providing military and other supports to it and call for international recognition is a clear case of "international political theft."

If this Armenian model is accepted or even endorsed by media then there will be chaos in almost every country. Endorsement for justifying illegal occupation of the enclave and demand for its recognition will cause a complex web of regional chaos.

Freeing the enclave and the seven occupied areas from illegal forces, return of the displaced people and restoration of autonomy to the enclave can be a viable option for regional peace and friendly relations between the two neighbors.