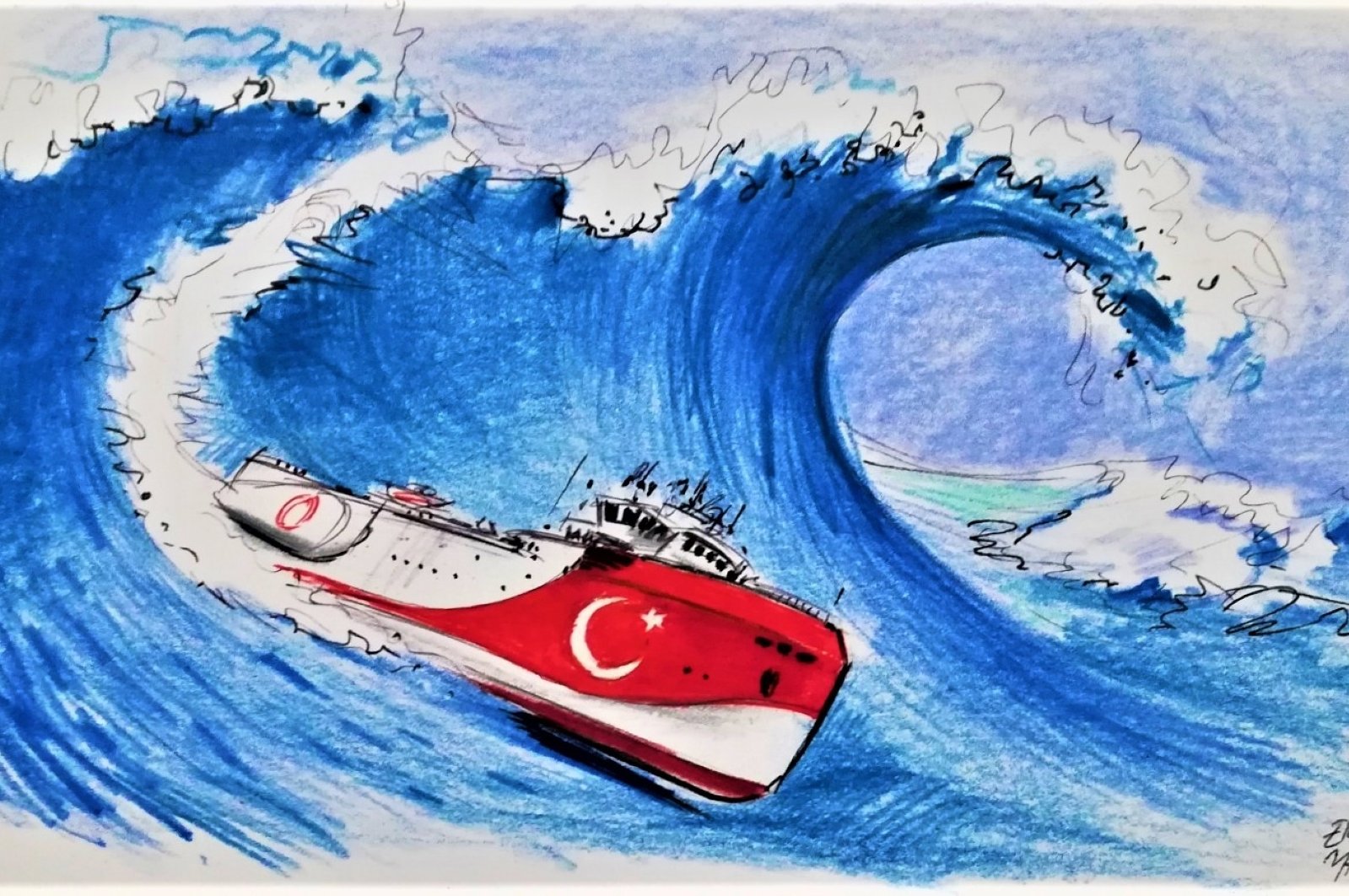 While most Turkish people are delighted with the announcement of the natural gas discovery, some self-appointed Greek and – unfortunately Turkish – experts have questioned Turkey's permission to take this natural gas. The leading German media outlets stated that it will be impossible to extract this natural gas from a depth of 3,500 to 4,000 meters (11,482 to 13,123 feet) since Erdoğan did not have the technical means to do so.

However, this is the same German media that has been celebrating the EastMed pipeline project for years, which is now no longer feasible under the Turkey-Libya agreement, as part of the route flows through Turkish waters under this agreement signed in November 2019, making it impossible to lay a pipeline in this area without Turkey's consent.

More interestingly, however, is that the gas that is to flow through this pipeline comes from Israel's Leviathan and Tamar natural gas fields. The natural gas reserves of these fields, in turn, are stored at depths of 5,000 and 7,000 meters and are already being exploited by Israel.

Therefore, it is questionable why Erdoğan, ironically, should not be technically able to take the natural gas in the Black Sea, which is only stored at half the depth.

Many Arab states are also unenthusiastic about the news of the discovery of natural gas in Turkish waters in the Black Sea, especially the United Arab Emirates (UAE) and Egypt, which have been following a Western course for years, trying to discredit Turkey and its ally Qatar in the Gulf region and deny Turkey's geopolitical rights. Furthermore, it cannot be ignored that in recent weeks the international community has shifted its focus to the events in the Eastern Mediterranean due to the natural gas reserves located there, although the reserves of natural gas have been known of for a decade.

France's provocative actions in this respect – in particular, by sending warships to Cyprus and Greece's largest island Crete – has heated up the tensions in the region. However, France has no territories, borders or other colonial heritage in this restricted area. Moreover, the United States is militarizing Cyprus by lifting the arms embargo on the Greek Cypriot administration, building a permanent military base in southern Cyprus, and militarily occupying Western Thrace under the veil of maneuvering, where Turks constitute a sizeable minority and enjoy official protection under the Treaty of Lausanne of 1923.

However, Greece, ironically as the cradle of democracy, has disregarded this protected status for many years: It expels nonassimilated Western Thrace Turks, closes Turkish minority schools granted by international treaties, does not recognize the self-chosen spiritual leaders of Western Thrace Turks, sends its own Muslim leaders instead and calls the Turkish population merely a Muslim Greek minority in order to legitimize and promote their assimilation.

The second wave was the fear that the attention of the international community would shortly become much more focused on Turkey's general attempt at discrediting itself rather than on the events in the Eastern Mediterranean since it became the 33rd natural gas-rich state in the world with this initial and small natural gas discovery and will possibly reach the top 10 within a very short time through further development in the Black Sea and the Eastern Mediterranean.

This fear is well-founded and, at the same time, a success for the Turkish president, who has consciously directed the attention of the international community with his proclamation. This is represented by Erdoğan's canny foreign policy, which has brought him many geopolitical gains over the years and is therefore compared to the leadership of the particularly sharp Ottoman Sultan Abdülhamid II, who ruled 100 years ago and was also harassed by the West.

However, the question is whether and to what extent the present and future discoveries in the Black Sea can contribute to a geopolitical paradigm shift in the Eastern Mediterranean. To answer this question, it must first be clarified what 320 bcm of gas means in real terms for Turkey. Turkey's annual natural gas consumption is just under 50 bcm, which means that with the discovered natural gas, Turkey would be able to cover its natural gas requirements, ceteris paribus, entirely on its own for over six years without imports. This corresponds to almost $65 billion (TL 474.5 billion). That is $15 billion more than the foreign currency reserves of the Central Bank of the Republic of Turkey (CBRT), which is overwhelming in terms of amount and scale.

With the small 320 bcm discovered so far, Turkey can double its money reserves overnight. If further natural gas reserves are developed, which according to experts will be far greater than the reserves discovered to date, in the medium term we can expect Turkey to become an, initially monetary, regional superpower, which can no longer be put into an economic or political crisis by foreign currency manipulation, as has been the case once again in recent weeks. This means that Turkey has gained considerable economic influence and will continue to gain more soon.

This, in turn, strengthens Turkey geopolitically. On the one hand, its trade deficit can be turned into a positive balance. On the other hand, its energy policy dependence on Russia – which supplies approximately 33% of its annual consumption – and Iran can be significantly reduced, also through more discoveries in the future. This will enable Turkey to strengthen its position in common foreign policy issues with Russia, for example, in Libya and Syria. Turkey's geostrategic importance, which has enjoyed the energy transit state status over the last 20 years due to the successful energy policy of the Justice and Development Party (AK Party), will also experience a change.

Turkey will no longer be an energy transit state, but rather one of the world's largest natural gas producers. Therefore, it will not be possible for the EU, which is deficient in natural gas, to exclude Turkey in European affairs and the Cyprus conflict in the long term since Turkey, as a natural gas exporting country then, can and probably will supply the European Union with natural gas at a low cost through the Trans-Anatolian Natural Gas Pipeline (TANAP) infrastructure that is already available.

Much more important is, however, that all the points which were mentioned so far may also lead to a geopolitical paradigm shift in the Eastern Mediterranean, not only for energy policy but also for regional security, economic and interest policy. A more robust economy and a strengthened energy policy position will probably give Turkey a boost in all its justified expressions of interest in the Eastern Mediterranean.

As the heir to the Ottoman Empire, Turkey will now be able to: (a) better protect the Turks in the Balkans, the Caucasus, the Aegean, and also in Iraq and Syria, (b) refute the lies surrounding the genocide of the Armenians, and (c) give more support to Azerbaijan in the conflict over Nagorno-Karabakh. A more robust economy will continue (d) to help the technological upturn and the development of the Turkish defense industry to achieve greater success, which will allow (e) geopolitical interests to prevail to a greater extent, including through (f) the establishment of new military bases. Multiplicative effects will thus be created.

However, the initial research question has still not been clarified: To what extent can the discovery of natural gas in the Black Sea guarantee a paradigm shift in the Eastern Mediterranean, in the narrower sense? Well, the question has already been partly clarified implicitly. The world's attention is now much more focused on Turkey's general rise to power and the East Mediterranean's demarcation.

So, some global powers are at least trying to represent their interests there, whereas riparian states are starting to carry out extensive research into natural gas. At least the natural gas reserves in the Eastern Mediterranean are no longer the focus of the media. Thus, Turkey will continue to search for natural gas reserves in its own and Turkish Cypriot waters.

The only paradox here is that Turkey has already been searching for natural gas in its and the Turkish Cypriot areas anyway, which are at its disposal under international maritime law. The diversion of attention, however, has enabled Turkey to carry out the research to which it is legally entitled without hindrance. Nevertheless, as a result of the natural gas discoveries in the Eastern Mediterranean, which are said to be much larger than those in the Black Sea: (a) the Greek Cypriot administration will be forced to recognize the sovereignty of the Turkish Republic of Northern Cyprus (TRNC); (b) France will at least respect Turkey's interests; (c) Egypt, which is rich in natural gas in the Eastern Mediterranean, will be forced to cooperate with Turkey on geo and energy policy, which makes sense in every respect due to synergy effects and geographical proximity; and (d) Greece will be obliged to respect Western Thrace Turks, recognize the Turkey-Libya agreement and abandon Turkey's exclusion from the EastMed pipeline project. All in all, it is to be expected that the natural gas discovery in the Black Sea will contribute significantly to a paradigm shift in the Eastern Mediterranean, even if in the medium term.

*Master of Arts at Friedrich Alexander University in Erlangen, Germany