Children in Beirut struggle to survive 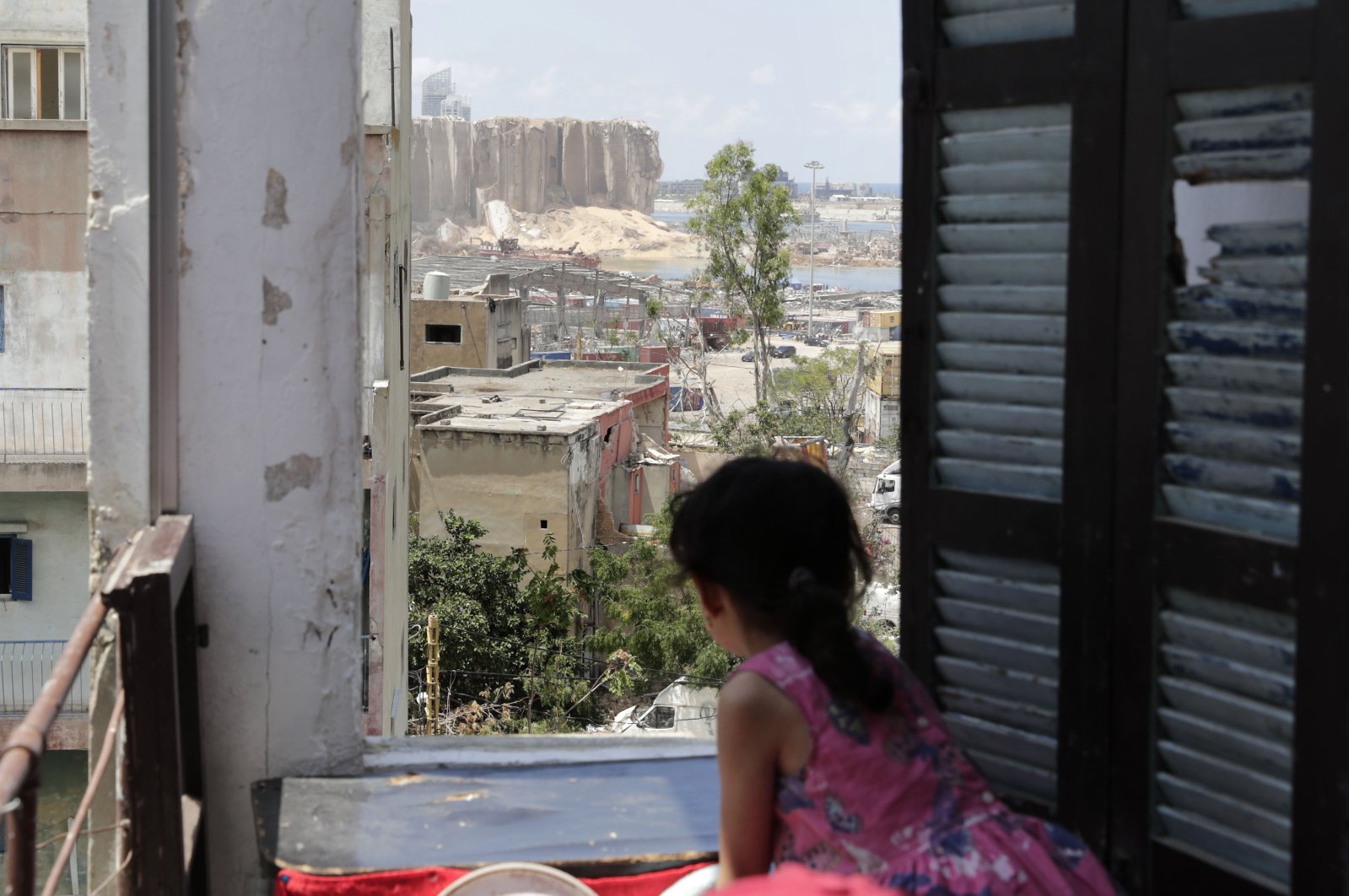 The huge explosions that took place in the Port of Beirut on the evening of Aug. 4 left nearly 180 people dead, 6,000 injured, hundreds missing and around 80,000 children displaced, suffering trauma and in shock, according to estimates by the United Nations Children's Fund (UNICEF).

In the densely populated city of more than 2 million people, families have been forced to seek temporary shelter with relatives and friends or in schools or other civic buildings.

There were numerous reports of children who have been separated from family members, some of whom are still missing, while at least 12 primary health care facilities and maternal, immunization and newborn centers in Beirut have been damaged, impacting services for nearly 120,000 people.

A children’s hospital in the semi-industrial neighborhood of Karantina in northeastern Beirut, which had a specialized unit treating critical newborns, was destroyed, and many schools in Beirut and the surrounding areas were damaged.

The impact of this destruction on children, their families and communities in the days and weeks ahead will be devastating.

Huge swathes of the city have been destroyed, on top of the COVID-19 pandemic, as Lebanon was already going through a social, economic and political crisis for the past year.

Medical supply containers and shops selling essential supplies were among the structures reduced to rubble, and many low-income families are unlikely to be able to afford to replace their windows and doors.

Since October 2019, Lebanon has been facing one crisis after the other. Over the past year, the country has been suffering from an economic crisis, dealing with almost 1.5 million refugees, facing a global pandemic and now experiencing an explosion that shattered its capital, leaving nearly 300,000 people homeless.

People have been left in shock wondering about their future and the future of their children. The sound of the blast left everyone frightened, the scenes of destruction are now engraved in everyone’s memories forever and the children of Beirut will never forget it.

Hundreds of Syrian refugee families reside in the suburbs of Beirut. They did not think for a minute that the memories of war and the sounds it brought would be revived in Lebanon; now they live in fear and panic as everything reminds them of the war back in Syria.

Nearly half a million refugee children live in Lebanon and another 31% of the population is below the age of 18.

Lebanon has generously received refugees who found shelter in urban neighborhoods, rural areas or informal tented settlements. However, living conditions can be challenging, notably for the most vulnerable.

The collapsing Lebanese economy has pushed more than half a million children in Beirut into a struggle for survival, many faced with hunger, an analysis by Save the Children revealed last month. Their families cannot afford the basic food, electricity, cooking fuel, hygiene supplies and water needed to survive. In the Greater Beirut area, 910,000 people, including 564,000 children, do not have enough money to buy the basic essentials, including sufficient food.

Save the Children said these numbers were likely to be just the tip of the iceberg as families across Lebanon struggle to cope with the soaring prices of food, rent and other necessities.

“This crisis hits everybody – Lebanese families, Palestinian and Syrian refugees alike. We will start seeing children dying from hunger before the end of the year,” said Jad Sakr, acting country director of Save the Children in Lebanon.

Since September, prices for basic items such as food and shelter have soared by 169%, while unemployment has risen by 35% in the formal sector and up to 45% in the informal sector. Inflation further decreased the purchasing power of families, which plummeted by 85%.

“Children, even those from Lebanese middle-income families, are increasingly eating less or nothing at all for a whole day just to make ends meet. In some cases, children are working to help with the family income, keeping them away from their education,” Sakr said.

Child labor is part of the livelihood coping strategy for many Lebanese families, with income from a child’s work considered crucial to survival.

Recently, a World Food Programme (WFP) survey showed that two-thirds of households in Lebanon faced a loss of income during the crisis, forcing many to spend less on food, go into debt or dig into their savings. One in five Lebanese families and 33% of Syrian families skipped meals or went without food for a whole day, and an astonishing 50% of Lebanese, 63% of Palestinians and 75% of Syrians were worried they would not have enough to eat.

The huge impact of the latest Beirut disaster on children is visible with the staggering number of deaths and injuries among families and children.

UNICEF said that children caught in the Beirut explosion will need special care and protection to recover, particularly in the middle of the COVID-19 outbreak.

Preliminary assessments still underway indicate children may account for up to one-third of the 300,000 people made homeless by the Beirut blast. Homes and infrastructure have been destroyed or have suffered extensive damage. Monitors report many households have limited water and electricity.

UNICEF spokesperson Marixie Mercado said COVID-19 infections are increasing and her agency is working with the World Health Organization (WHO) to replace their supplies. Johns Hopkins University reported nearly 6,000 coronavirus cases in Lebanon, including 70 deaths.

“The areas around the blast are those with some of the most active clusters and community transmission," Mercado said. "It is impossible for those affected to practice safe distancing, and there is a desperate need for masks. But for most people right now COVID is not top of mind.”

Mercado said UNICEF’s immediate priorities include the reunification of children separated from their families by the disaster. She said many will need psychosocial support to deal with the shock, trauma and bereavement of the loss of families and friends and the places and belongings they held dear.

Damaged health care facilities and schools will have to be rehabilitated. “We have initial reports of over 120 public and private schools that have sustained damage ranging from windows blown out to more fundamental infrastructural damage," Mercado said. "These schools serve approximately 55,000 children and it will be crucial to rehabilitate them before the start of the new school year.” Schools are set to start in Lebanon on Aug. 26.

Children are the worst affected during disasters due to physical, psychological and social vulnerabilities. The major impact remains due to physical vulnerability, as children bear the brunt of shock due to any disaster, be it a natural disaster like a flood, earthquake, tornado or heat or cold wave, or human-made disasters like fires, a pandemic or explosions like the recent one witnessed in Beirut.

Children are the worst sufferers as they are doubly hit. Firstly, at the time of the disaster, due to the inability to escape or fend for themselves, especially for very young children, they become at high-risk for injury. Secondly, they become high-risk post-disaster due to the separation or loss of their families and their homes.

Be it physical, psychological or social vulnerability, the trauma surmounts the disaster risk on children, which is further aggravated due to the intensity of the tragedy and low coping capacity.

The Beirut disaster risks can be minimized by building a safety net for children so that they are protected and can cope better in this sudden tragedy.

The Aug. 4 scenes are horrific to an extent that they can never be forgotten or erased from the memory of anyone who saw them, for many generations to come. It is a catastrophe that will forever be engraved in the memories of all those who lived through it and most certainly in the minds of the children, but the Lebanese people are strong and love life. They will stand up stronger and by all means safeguard their children from the severe impacts of this trauma.

It is time to make child protection a top priority as this shock can have a permanent impact on their social and psychological well-being in the years ahead.