Chinese example in the context of energy security 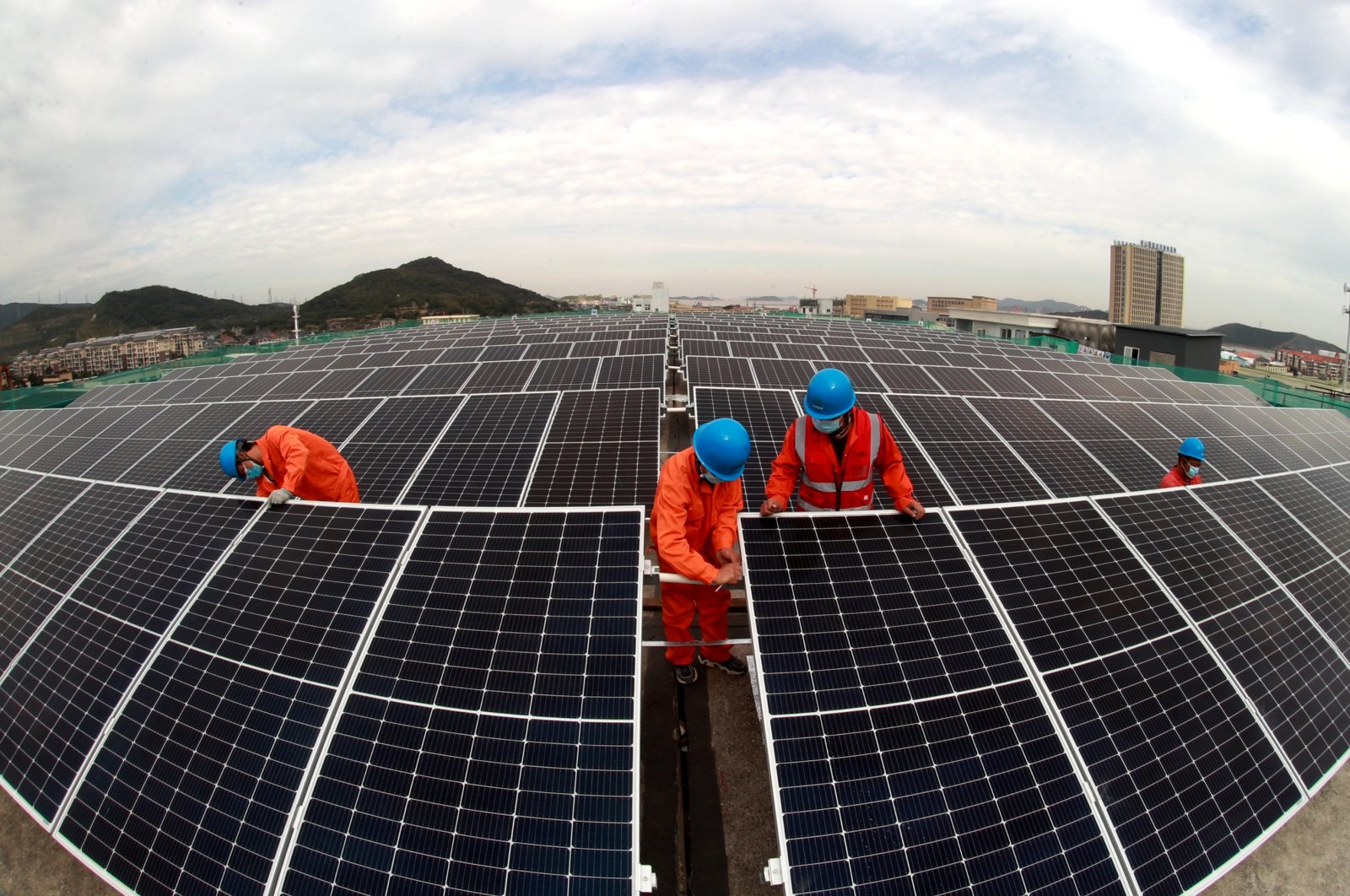 In a period when renewable energy and energy security dominate the economy, China's example provides a lesson for the world

The International Energy Agency (IEA) stated that the demand for oil will increase to 500,000 barrels per day, accelerate inflation and slow down the economies. In this regard, China as the biggest energy consumer, exporter and producer, has still faced an energy crisis in recent months. The coal shortage in thermal power plants in China, which meet the country's electricity production, high fuel prices and increasing industrial demand after the pandemic, have caused power cuts across the country. Electricity usage quotas have been imposed on factories for a long time. While coal prices are breaking new records with the approaching winter, large energy companies based in China are trying to make long-term agreements with overseas suppliers. According to the data released by the General Administration of Customs, China's coal imports increased by 76% to 32.88 million tons in September 2021 compared to the previous year. The rising energy costs in China have also increased production costs, which are expected to increase costs globally. On this point, renewable energy may ease the situation for China.

As mentioned, energy security means keeping energy supplies and resources safe and remaining aware of the vulnerability of the system by maintaining a stable system at affordable costs.

The issue dates back to World War I when British Prime Minister Winston Churchill decided to convert the British military’s energy source from coal to oil. Britain was getting its coal from Wales, but it was importing oil from Persia. Therefore, the security of oil became the security of the military as well as Britain’s. This historic event was noted as a fundamental starting point of energy security.

Some dimensions shape energy security, such as sovereignty related to energy resources and how much influence the county has on the supply of the resources – whether they are located at home or abroad. It helps the country to prevent the risk of lacking energy resources. The supply-demand balance and resilience make the country more secure amid crises and help the system recover.

However, our modern energy system is built on oil. Limited oil resources are a critical research topic for the future of humanity. The world has been converting the use of fossil gas to natural gas, with natural gas being a cleaner option than fossil gas. Yet, more recently, access to those resources is being weaponized. One recent example is Russia and Ukraine. In 2006, Russia cut off the natural gas supply to Ukraine. Likewise, the price is set by political relationships rather than the free market. It is clear that one day oil and natural gas supplies will be run out; as a result, renewable energy will play a more important role in supporting the energy supply system. In this regard, China, as the biggest energy-consuming country in the world, has made massive investments in renewables across the country.

China has faced an energy crisis in recent months. Many factories have limited energy quotas to run their production. It brings the energy security question to the table again.

China used to be an oil exporter during Deng Xiaoping’s leadership (1982-1987). But currently, the country is struggling to get enough supply of energy. The country is highly dependent on imported energy, which leaves it vulnerable to global changes like conflicts and health crises, like the coronavirus pandemic. Especially recently, due to the limited energy, China has faced electricity cuts across the country that have affected production and sustainability.

In the future, 80% of the world population will be living in developing countries. That means there will a higher demand for energy as well as increased income and consumption in the future. On the other hand, China’s current population is 1.41 billion. It’s expected to increase by 1.46 billion by 2030. That means China needs to increase its energy supply in the following years. For example, due to the pandemic, many countries consumed less oil in 2020. China was the only country worldwide in which the consumption rate increased.

China is one of the biggest importers of energy. With the economic growth, China’s dependency on energy is rising. By 2019, China surpassed Japan and became the largest importer of liquefied natural gas (LNG). The United States is the biggest producer of LNG, while China, the largest market holder country, faces the risk of sanctions, especially amid the “trade war.” It shows that the country needs a long-term energy security plan. China’s dependency on foreign energy resources threatens China’s economy, especially in times of the trade war with the U.S.

Energy supply security is a national security problem. Dwindling energy resources around the world, increasing demand, regional tensions and sanctions put China’s energy supply in a risky situation. All those mentioned factors make energy even more expensive. China purchased 10,853 barrels of oil per day in December 2020. Energy dependency is a major risk for China’s current and future development plans. Therefore, China diversifies its energy resources and avoids “putting all of its eggs in the same basket.” At this point, renewable energy might play an important role. As a result, the Chinese government continues to invest in renewable energy options across the country.

Energy security is not only about supply, transportation and demand but also the environment and climate change. The majority of China’s primary energy consumption is based on coal. The Chinese government has declared that by the 2060s China will be a carbon-neutral country. Chinese President Xi Jinping promises that the Chinese sky will be blue again. The country aims to meet 35% of demand with green energy by 2030. In this regard, China invests more in lower carbon-producing energy recourses to solve the air-pollution problem. During the coronavirus lockdown, less use of traditional energy resources reduced carbon release and increased the air quality in many countries. The post-coronavirus era might be a chance to extend green energy in many parts of the world.

As mentioned, the energy security concept was created by the British military's energy issues, but one of the concerns of contemporary world energy security is climate change. Moreover, unexpected factors like the Arab embargo on oil during the 1973 Arab-Israeli War and sudden increasing petrol prices make alternative options more significant.

Another example is the context of renewable energy was the winner of the Russian-Ukrainian gas conflicts when Ukraine faced several gas cuts. Lastly, after the Fukushima nuclear crisis, Germany decided to shut down one of its nuclear plants and invest more in renewable energy. All those examples show that renewable energy may play a role. Many countries realized how alternative energy reduces the risk of energy security.

China struggles with air-pollution issues across the country. That is another vital motivation for transferring energy resources to clean energy. Renewable energy is already being used in Israel and Denmark's traffic and transportation systems, but it's more challenging in the countries like China.

China is geographically the fourth-largest country in the world. In a long term, there is a challenge of cost; producing renewable energy plants costs more than other traditional energy sectors. The high cost of renewable energy may push electricity costs up and affect countries' industrial competitiveness.

In the ultimate scenario, China’s renewable energy investment will help the country keep capital in the domestic economy as well as create less dependency on import energy. China's investments and R&D activities in the renewable sector and increasing manufacturing capacity helped reduce the cost of wind and photovoltaic (solar) power around the world and increased efficiency.

In this case, China as the main stakeholder of renewable energy is expected to be the “Saudi Arabia of the new OPEC” of renewable energy. For example, Polysilicon material might play a very important role. Polysilicon is the main material of the solar sector, the base material for producing solar panels. China is the biggest producer and consumer of Polysilicon in the world. The country’s border regions like Inner Mongolia and Xinjiang are the Polysilicon hubs of the world. Although there are some other producers in Germany, South Korea and the U.S., China heavily dominates the market. Polysilicon prices were at $11 per kilogram in January 2021, but it’s likely to reach $41 through 2021. Hegemony on basic renewable energy materials, strong R&D researchers and advanced products may bring China a chance to be not the only market leader but also the biggest supplier of renewable technology in many senses. It is expected that China will produce 1 in every 4 gigawatts of global renewable energy by 2040.

Energy security is a need and demand has been growing. Countries may weaponize energy resources, as well as the delivery and supply of energy. The world’s resources are running out, and the earth has sounded the alarm about climate change. Renewable energy is not the ultimate solution. Countries need to extend their resources.

Besides increasing energy demand, a higher rate of renewable energy share is expected in the future. However, it is unrealistic to expect renewables to overtake the current energy system. In this regard, China's experience is a very clear example for the contemporary world. China is increasing the role of the renewable energy sector to balance its energy needs as well as reduce its carbon footprint. It makes the country invest and increases R&D activities; the country is gradually becoming a pioneer of the renewable sector in the world.