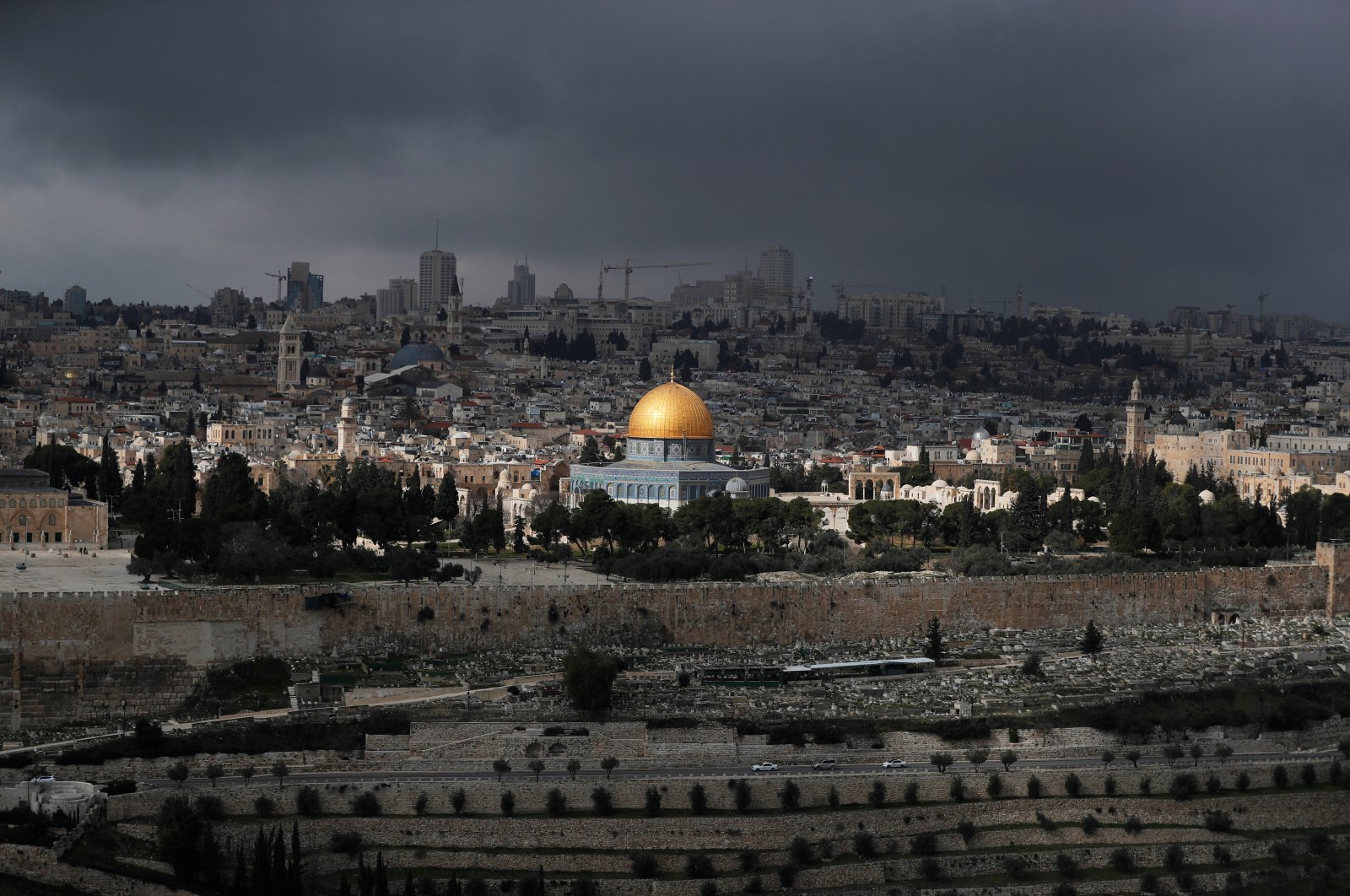 The Dome of the Rock in the compound known to Jews as Temple Mount and to Palestinians as Noble Sanctuary in Jerusalem's Old City, Jan. 29, 2020. (Reuters Photo)
by Najla M. Shahwan Jul 14, 2020 12:05 am
RECOMMENDED

Last month Palestinians marked the 53rd anniversary of the 1967 War in which Israel conquered the West Bank, east Jerusalem, Gaza and the Golan Heights, launching an occupation that grows stronger day after day. In reality, the actual occupation took place on June 11, when the whole historic 770-year-old Mughrabi (Moroccan) Quarter was erased.

On that night, as the Six Day War was drawing to its end, around 135 Palestinian families living in the Mughrabi Quarter of the Old City, adjacent to the Western (Wailing) Wall, woke up to the noise of Israeli bulldozers which were destroying their homes and the quarter’s two mosques, to make a plaza for Jewish worshipers in front of the wall.

For Palestinians, this Western Wall Plaza became the site of an unforgettable war crime and the demolition by itself, a pro-active operation that established the first of thousands of “facts on the ground” in the Old City of Jerusalem.

The historic neighborhood, located in the city’s southeast corner near the western wall of the Noble Sanctuary (al-Haram al-Sharif), was completely wiped off the physical map by the state of Israel – in flagrant violation of the Fourth Geneva Convention, which prohibits the destruction of private property except in cases of “immediate military necessity,” which in this case was not.

The quarter itself was built in the 12th century by Ayyubid Sultan Saladin’s eldest son, al-Malik al-Afdal, in about 1193 as a Muslim waqf – an inalienable charitable trust under Islamic law and the endowment was extraordinarily inclusive:

“For the benefit of the community of Mughrabi of all description and different occupations, male and female, old and young, the low and the high, to settle in its residences and to benefit from its uses according to their different needs."

At the time of the Six Day War, it contained 135 homes, three mosques and about 650 people, half of whom could trace their lineage back to the Maghreb region of North Africa.

Over the course of several centuries, Jewish, Christian and Muslim Arabs from Palestine and elsewhere took up residence in this quarter too.

On June 8, 1967, David Ben-Gurion firmly declared on-site to Teddy Kollek, mayor of West Jerusalem, who was accompanied by a National Parks Authority official: “The area must be cleared to reveal the wall," Tom Abowd's article titled "The Moroccan Quarter: A History of the Present" said.

Forcible clearing began just two days later on June 10, 1967 when a volunteer demolition crew of private contractors, recruited by Zalman Broshi at the behest of Kollek, arrived in a convoy through Zion Gate and started their operation under the cover of the night.

"Broshi’s crew followed a rather sketchy hand-drawn plan conceived earlier in the day by architect Arieh Sharon, president of the Association of Architects and Engineers and an employee of the National Parks Authority," wrote Maryvelma Smith O’Nei in The Mughrabi Quarter Digital Archive published in the website of Institute for Palestine Studies.
Loudspeakers ordered residents of the Mughrabi Quarter to evacuate their homes within three hours while the curfew was in effect.

"The destruction continued for two consecutive nights; excavators and bulldozers worked relentlessly under floodlights to flatten the mainly one or two-story stone and brick-domed residences clustered densely along narrow alleyways."

"One elderly woman was found dead in her bed, and there were reportedly other corpses plowed over in the wreckage. The entire neighborhood was gone besides some historic monuments, among them two mosques and numerous properties belonging to the waqf," Maryvelma said in the article.

This strategy of purposeful depreciation of the non-Jewish heritage of the city can be seen clearly in several developments involving the wall and the destruction of the Mughrabi Quarter which decisively started an ongoing Zionist program to establish illegal facts on the ground in east Jerusalem’s Old City.

Shortly after Jewish bulldozers destroyed the Mughrabi neighborhood, the nearby Sharaf neighborhood was eradicated, as well.

Two mosques and 700 buildings – including 1,840 apartments that housed approximately 6,000 Palestinians and 437 shops which supported 700 laborers – were demolished.

A collection of houses and businesses were constructed on that spot, which was renamed the Jewish Quarter.

On June 22, 1967, the Jewish state formally annexed occupied east Jerusalem by extending over the city the law, jurisdiction and administration of the State of Israel despite strong opposition from Palestinians and the international community who declared the annexation illegal.

Regardless of the many international resolutions condemning this annexation, Israel has continued its policies and has, moreover, proceeded to Judaize the city.

On June 26, 1968, an Australian Jewish tourist named Michael Dennis Rohan set fire to the al-Aqsa Mosque, the third holiest site in Islam, and caused considerable damage. Meanwhile, various Jewish extremists intensified their activities by seizing buildings and residential units, especially in the Muslim Quarter, al-Wad Street and the southern side of al-Silsilah Street which has been extended to Aqaba al-Khalidiyah, Aqaba as-Siraya and Sa’adiya neighborhoods, as well as other places.

From 1967 to the present, fraudulent means such as contracts signed illegally by secondary leaseholders have been used by Israeli colonists to take over 40 buildings inside the Muslim Quarter.

With the beginning of the Intifada – a sustained series of Palestine protests – the settlement movement made the Old City its utmost priority. By collecting funds from donors, the Israel general and politician, Ariel Sharon, stepped up repair on his home in the heart of Aqba al-Khalidiya neighborhood. He initiated the establishment of a special fund for this objective and in one evening in New York, he was able to raise nearly $20 million to support the Jewish colonies in Jerusalem.

Since that date, the Israeli policy aiming at cleansing Jerusalem’s Old City of its Palestinian residents has been carried out systematically.

In recent years, with the approval, backing, budgeting and assistance of all Israeli authorities, the number of settlers moving into the heart of the occupied Old City rose dramatically.

These settlers have made the lives of the Palestinian residents unbearable from the invasion of privacy, economic pressure to daily harassment.

Besides, the Israeli state and settler organizations, with their vast resources and power, force the Palestinian residents to conduct lengthy and expensive legal proceedings to prove the ownership of their homes in the Old City. There are now about 1,000 Jewish settlers living in the Muslim and Christian Quarters, according to Ir Amim, an Israeli organization campaigning for equal rights in Jerusalem. These settlers constitute a quarter of the Jews living in the Old City.

Currently, 20 Palestinian families in the Old City face evictions, according to Ir Amim.

Settlers have also been taking over properties in the Christian quarter owned by the Greek Orthodox church, apparently using each new Patriarch’s dependence on Israel’s approval of his appointment as leverage to force through the sales.

What are the rights and laws?

Israel does not consider the residents of east Jerusalem as individuals with equal rights; instead, it seeks, by all means, to evict them from their homes since they stand in the way of the state’s objective of Judaizing the city.

In most cases, various bodies representing the settlers try to evict Palestinians from their homes by applying the Israeli law which enables Jews to claim ownership of property they or other Jews possessed prior to 1948 while on the other hand, the Israeli state enacted a law that prohibits Palestinians from taking such action with regard to any property they owned before 1948.

All appeals made by Palestinians in front of the Israeli courts to allow them to stay in their life-long homes have failed as Israel uses a variety of illegal methods to achieve this end.

The Israeli authorities deliberately prevent Palestinians from building in the city and issues demolition orders for homes built without a permit thus demolishing dozens of homes every year.

Besides, Israeli authorities do not invest in infrastructure and services for the Palestinian neighborhoods and deny the Old City a master plan, making it all but impossible for Palestinians to expand their homes to cope with the population growth.

This strategy of purposeful depreciation of the non-Jewish heritage of the city, and the displacement of its Palestinian citizens can be seen in several illegal Israeli actions involving the whole demography of the old city of Jerusalem and the common thread linking these tragedies has been accelerated systematically in the past few years by Israeli authorities, taking advantages of short windows of opportunities to seize and annex Palestinian lands in moments of discord and world crises.