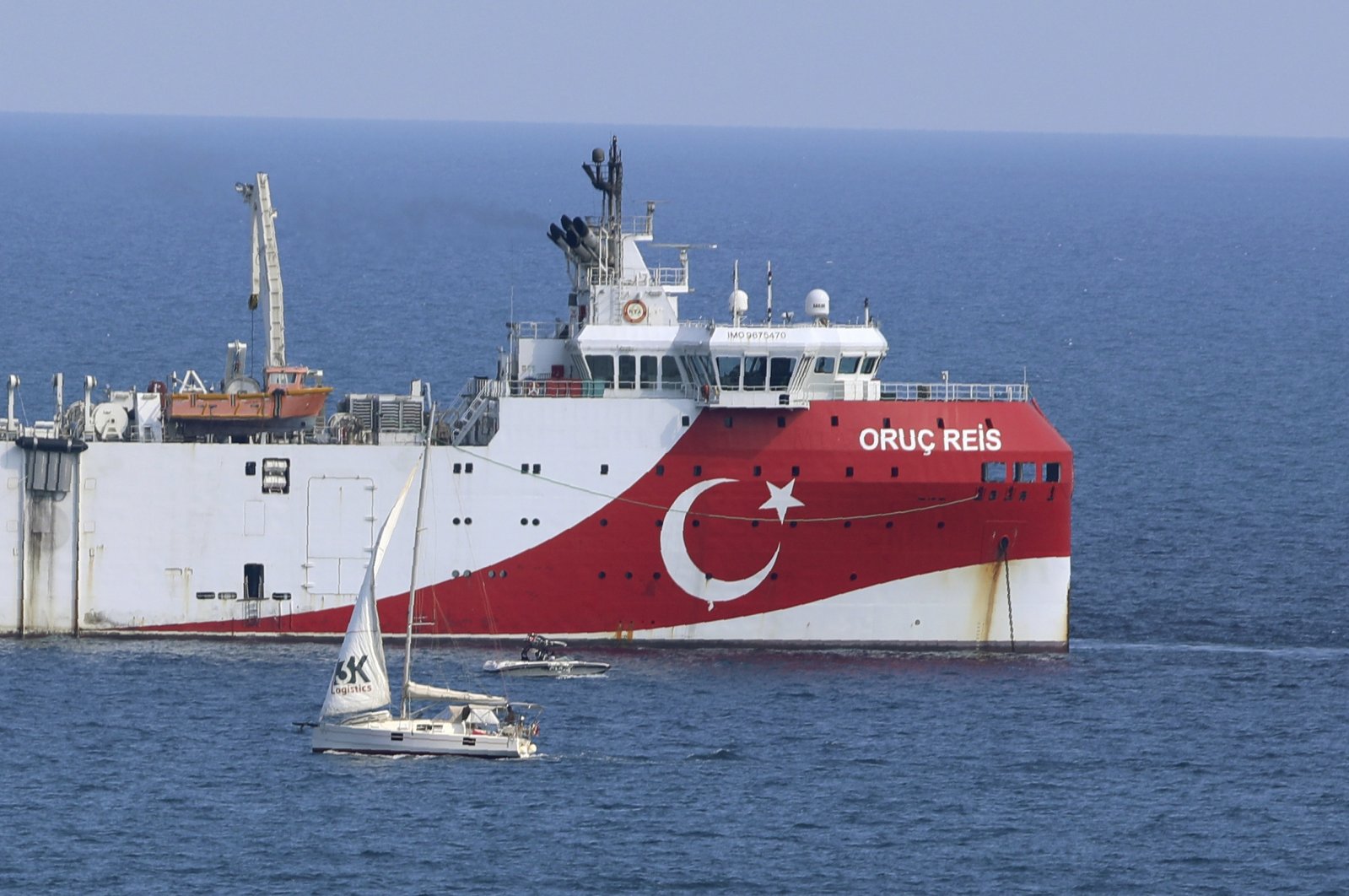 Ankara is under pressure in the Eastern Mediterranean and faces the threat of isolation in the future, but if it can handle the crisis effectively, Greece's strategy could backfire

Last week Greek Prime Minister Kyriakos Mitsotakis wrote a guest article for the German Frankfurter Allgemeine Zeitung (FAZ) in which he presented Turkey as a provocateur in the Eastern Mediterranean and as a danger for the European Union. He portrayed President Recep Tayyip Erdoğan as someone who would use all means to push through his interests, a characterization the Turkish president does not deserve.

Above all, Mitsotakis addressed the issue of refugees, which is essential for Germans and Europeans and has triggered increased right-wing extremism and Islamophobia in large parts of the EU following the refugee crisis five years ago.

According to the Greek prime minister, Turkey sent refugees to Greece in the beginning of 2020 to blackmail the EU and signed a maritime border agreement with Libya last year with the aim of provocation, which, according to him, is null and void since Turkey is not a geographic neighbor of Libya. He also accused Turkey of occupying the northern areas of Cyprus illegally since 1974.

It is the same Greek state that allows other global powers, together with its accomplice the Greek Cypriot administration, to set up bases in the region, change Ottoman mosques into sanitary facilities, ban the opening of a mosque in Athens and force Western Thrace Turks to assimilate. However, Western Thrace Turks are under international protection due to the Treaty of Lausanne.

Furthermore, they are the same Greek opinion leaders who treat refugees in migrant camps inhumanely and burn the Turkish flag because of the Hagia Sophia's reopening for Muslim worship.
It must be clearly emphasized at this point that the Turkish operation in 1974 to prevent Greek Cypriots from committing an intended genocide of the island's Turks was declared legal by the Athens Court of Appeals’ decision in 1979.

Also, Turkey opened its borders at the beginning of the year, not to provoke the EU but to draw attention to Brussels' counterproductive attitude in Syria and the one-sided burden of the refugees since the EU has not provided promised funds.

So, after this explanation, it becomes evident that Mitsotakis’ aim is emotional impact and his limited political guest contribution was to gain the support of the German population. Greek Cypriot President Nicos Anastasiades did the same a few weeks ago in his contribution to the German daily Die Welt and thus presented the Greek Cypriot administration as victims of crimes in the Eastern Mediterranean, of which they are, in fact, the perpetrators.

Mitsotakis' pretension and use of technical terms – most of which the population will not know and he therefore deliberately used – illustrate the extent of his deception and his leadership style in particular.
Greece has been playing an underhanded game in the Eastern Mediterranean, especially in recent weeks, together with French President Emmanuel Macron, the Greek Cypriot administration, the United States and Israel.

The U.S. was unable to realize its "Greater Middle East" project due to both the failed Arab Spring and the failed coup attempt in Turkey in 2016. Washington is now trying to redesign the region with the Trump administration's “deal of the century." For this, U.S. President Donald Trump has even been nominated to receive the Nobel Peace Prize. Unfortunately, this news is no longer surprising.

With the new Middle East peace plan, however, the U.S. has officially initiated Palestine's annexation. After this, some states under significant American influence have recognized Jerusalem as the capital of Israel.

With its political ambitions and Mossad's help, Israel continues to strive to win over the Balkans, the Gulf region and above all, North Africa. The reason follows later, but it is striking in this context that these areas once belonged to the Ottoman Empire.

After the United Arab Emirates (UAE) initiated the "normalization process" with Israel, other Gulf monarchies, as well as Serbia and Kosovo, are on the verge of following suit.

The Gulf and Balkan states are fulfilling this process as a condition of their client, the U.S., since Washington has gained a great deal of influence in each region after the EU, especially Germany as an opponent to France in the EU, neglected the regions. As they try to acquire more geopolitical power, stability and international recognition in the region, Israel has broader interests in its new strategy.

Through the normalization process with Islamic countries, Tel Aviv wants to legitimize the annexation of Palestine on the one hand. It is because Israel can argue that, despite the peace plan, Islamic countries want to reconcile with Israel and are, therefore, not doing anything wrong.

On the other hand, ironically, the strategy intends to end Turkish influence in the region in former Ottoman territories and push Turkey into total isolation in the region by polarizing other states against Ankara.

This strategy, which Israel is pursuing with its partners Greece, the U.S., partly Egypt and the Greek Cypriot administration, is also clearly evident in Mitsotakis’ above-mentioned guest article in the German daily FAZ.

Reconciliation with neighboring states is particularly important, as Israel is looking for new sales markets for its natural gas, which it draws from the Eastern Mediterranean. It can no longer transport the gas to Europe via the EastMed pipeline due to the Turkey-Libya agreement.

If its strategy works, Israel can now emerge as a regional power and expand its influence in Syria and Lebanon. Thus, the main threat it faces directly or indirectly from Iran's presence in these states will be negligible.

Israel wants to establish Iran as the main enemy of the Middle East because of its Shiite orientation and above all, to make Turkey, under the veil of “neo-Ottomanism,” which Erdoğan is accused of by the West and Israel, the new target of geopolitics in the Eastern Mediterranean of the 21st century.

In this regard, Mossad's ambitions are particularly noteworthy. The national intelligence agency continually publishes reports claiming that Turkey wants to besiege some Balkan countries and Egypt – claims that are far from the truth.
France and the Greek sides

France has always been ambitious to make the EU the counterpart of the U.S. Remaining distanced from the English language, France continues to cultivate the habit of behaving like a colonial power, such as in its monetary and financial policy in today's sovereign but formerly French colonial countries in Africa.

France is planning to reshape the EU, as in all common European policy areas, at Germany's expense with the Permanent Structured Cooperation (PESCO), a joint military system designed as a counterpart to NATO.

Above all, France has pointed to the unrest in the Eastern Mediterranean for the need for a joint operational and deterrent military alliance that can take action.

Since Turkey is a NATO member state, France knows it cannot take military action against Turkey, primarily since Ankara draws its strength from international treaties and has a robust military.
As it is, Ankara has had to cope with a decadeslong fight against the terrorist organization PKK thanks to the West since this organization is the extended arm of the Western imperialist endeavor.

However, its megalomania has not exhausted. Macron has presented himself in the media like a liberator in Lebanon after the explosion in Beirut's port in August, making recurring French colonial aspirations public once again. However, France plans to continue to expand its influence in the former colonial area of Lebanon to take Israel's archenemy, Bashar Assad, under its wing in Syria, to weaken Hezbollah, to end Iran's influence in the Shiite crescent and to build up pressure on Turkey, through symbolism, but also by stationing its troops in the region.

The first step in this direction is deploying its aircraft carrier Charles de Gaulle in the Eastern Mediterranean, joint maneuvers with the Greek Cypriot administration and Greece, and permanently stationing frigates near Cyprus.

Macron's presumptuous desire to isolate Erdoğan, as he stated in his speech last week, is hugely encroaching, misplaced and shows his insuppressible megalomania.

Above all, France is showing off in Cyprus, although it has neither guarantor status nor maritime territory bordering the island. Thus France, just like the U.S., has absolutely no say in the region.
Only the EU would be able to offer input because of its member states, Greece and the Greek Cypriot administration. However, since German Chancellor Angela Merkel and Macron disagree on a common policy in the region, Macron cannot align the EU politically according to his interests. However, these ambitions still work to counter de-escalation in the area.

It is openly stated above that the U.S., France, Israel, Greece and the Greek Cypriot administration intend to politically isolate Turkey in the region, depriving it of all its rights and denying its rights to natural resources in the Mediterranean. This demonstrates the manipulative tactics of the 21st century. Nevertheless, what are the ways out for Turkey? The answer is quite clear. Turkey has three options:

First, Turkey has to sign a maritime border agreement with Egypt. According to President Erdoğan, Egypt is interested in such an agreement and informed him through the Egyptian intelligence service. This agreement would benefit both sides.

Third, Russian-Iranian-Turkish trilateral cooperation would have to be expanded not only with Syria but also in the Eastern Mediterranean and especially in energy and security policy.

If Turkey misses this step, it could face permanent isolation as it did during the 1915 Armenian allegations, which were concocted by the West. But if Turkey is successful, the Greek comedy in the Eastern Mediterranean will be finished forever and replaced by an upcoming Greek tragedy.

*Master of arts at Friedrich Alexander University in Erlangen, Germany