Full of hot air: What happens when a president fans the flames 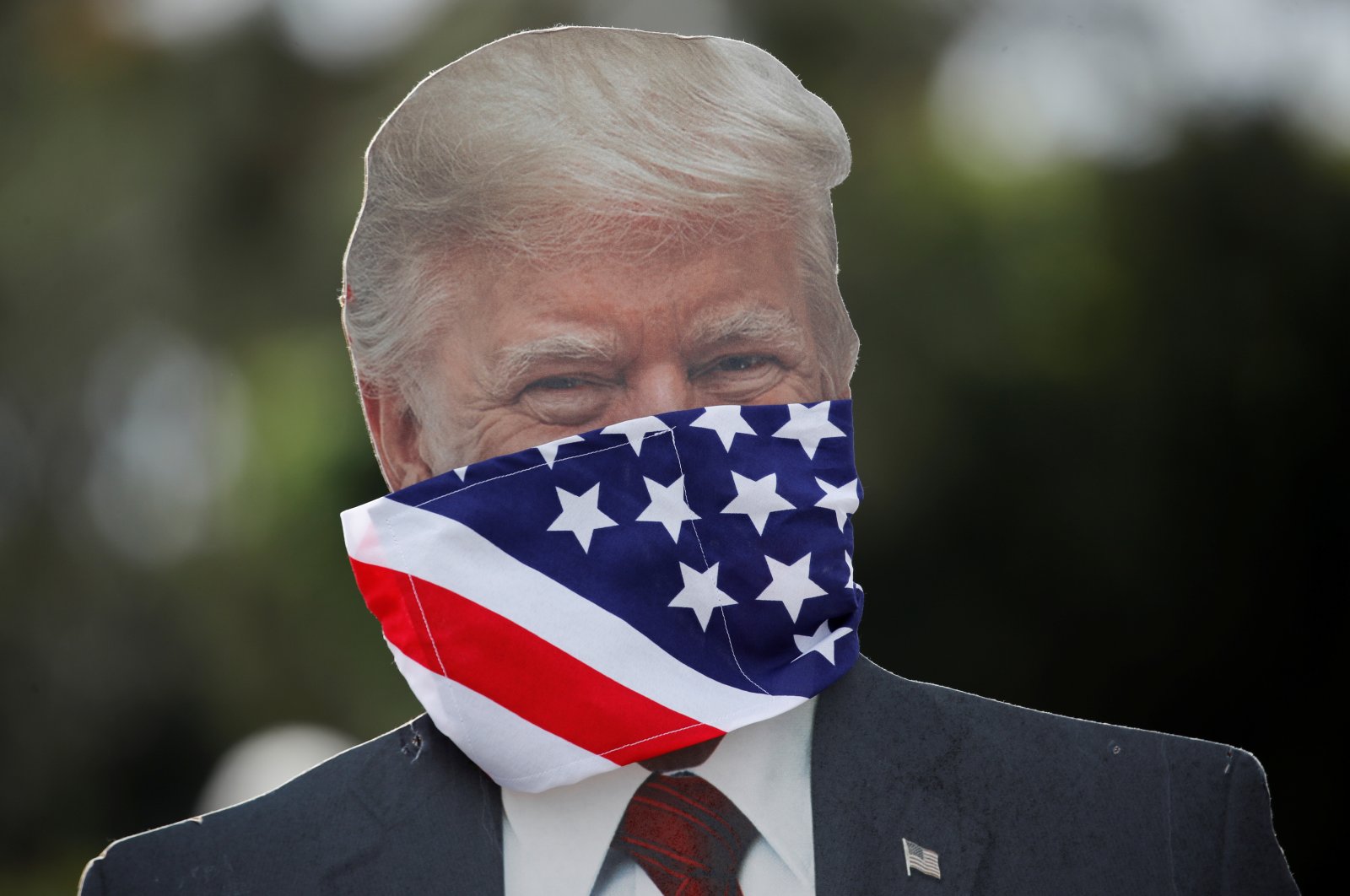 A cardboard cutout of U.S. President Donald Trump wearing a mask is seen at a protest over the stay-at-home orders involving the closure of beaches and walking paths during the outbreak of the coronavirus in Encinitas, California, U.S., April 19, 2020. (Reuters Photo)
by Mindy Yartaşı Apr 25, 2020 12:05 am

Trump has spent his presidency tweeting his way through a series of crises, but the devastating coronavirus pandemic has made his inflammatory posts more dangerous than ever

With elections coming up in November, United States President Donald Trump has seized the opportunity the coronavirus has presented to widen the already deep fissures in American society. In part, he has achieved this through his usual rhetoric that, according to him, simply “tells it like it is.” In the past, Americans have had to tolerate politicians as they spent hours lacing convincing words together only to say nothing of consequence in the end. After decades of long-winded speeches, let’s face it, some were ready for public figures who speak their unfiltered minds. Combine that with the obsession for the drama-horror that is reality TV and maybe you can sympathize with where lines were crossed come election time in 2016.

Running the U.S., however – or any country for that matter – requires a certain amount of finesse. Finesse and tact are not Trump’s strong suits, to say the least. And to be honest, he has never claimed they were. This approach, however, becomes dangerous when Trump purposefully uses inflammatory rhetoric to make a point, push an agenda or rally his base. Strong words expressed by a figure in power can be persuasive. I assume that he is well aware of his constituency, thus the continued use of certain language and tactics.

By relying on knee-jerk responses to drum up support, the instant exposure Twitter offers has made the platform his favorite online stage, starring 280-character, impromptu, boorish rants, inflated praise and equally inflated insults. Between April 13 and April 16 of this year alone, his tweets included the insults “fake,” “crazy,” “incompetent,” “weak,” “pathetic,” “third-rate,” “losers” and “hack,” all primarily targeting politicians and members of the press. Inflammatory language is distracting. It’s a look-over-here tactic for when you need to do something over there. In other words, it is a defense mechanism. Instead of simply outlining the wrongs he feels have been made against him, he accuses, insults and belittles his targets. A great ongoing example of this behavior is his feud with the media – or as he likes to call it, the “Lamestream Media.”

Trump has throughout his tenure repeatedly claimed that others around him are liars who spread “fake” information or news. These statements often follow news coverage or professional statements that contradict what the president has in the works. A classic, recent example on April 13 was when he took to Twitter to proclaim: “I am working hard to expose the corruption and dishonesty in the Lamestream Media. That part is easy, the hard part is WHY?” Let’s take a closer look at this Trump tweet, a genre that has become classic in and of itself. This post was in response to a New York Times article about a ban on flights from China as a counter-COVID-19 measure, and the newspaper was the target of his hard work to expose “corruption and dishonesty.” Of course, Trump has the right to disagree. The main issue from the get-go with this rather tweet-obsessed leader is how he expresses his oppositions. Let’s look past the fact that the 73-year-old president of the U.S. is using terms like “Lamestream” and rather address the tone. The all-caps “WHY” can only be read as a shouted whine. There is no other voice that would appropriately reflect its connotation. The use of all caps on the internet connotes virtual shouting, while the “why” leads one to believe he has little control over what is going on. Although he mentions the source of his angst in the same thread, where there should be an intelligent rebuttal, we are simply confronted with defensive insults and a needy query from someone who should be assuming a confident, leading role. There are countless more examples that mirror this.

A case in point comes from April 21, on MSNBC’s news show “Morning Joe,” featuring host Joe Scarborough, whose criticism of the president’s coronavirus strategy prompted Trump to tweet: “Watched the first 5 minutes of poorly rated Morning Psycho on MSDNC just to see if he is as ‘nuts’ as people are saying. He’s worse. Such hatred and contempt! I used to do his show all the time before the 2016 election, then cut him off. Wasn’t worth the effort, his mind is shot!” Calling a respected reporter and former congressman a “psycho” and “nuts,” whether you agree or disagree with his reporting, only to go on to claim the broadcaster harbors “hatred and contempt” without reflecting on one’s own explicitly negative commentary is both ironic and dripping with immaturity.

Luckily, the press in the U.S. is in no danger of being persuaded by Trump’s hissy-fit tweeting style. His staunch supporters, on the other hand, are another story entirely. Timelines show that the Trump administration had ample time to prepare for the inevitable coronavirus outbreak in the U.S. The president spent this time claiming that he had everything under control, that the virus wasn’t a major threat and that the U.S. had plenty of supplies if it did somehow find its way to American shores. He was wrong on all counts. The country has been the worst hit, with more than 800,000 infections and a staggering 45,000-plus deaths. The virus is quickly bringing the U.S. economy to its knees and has left millions of Americans out of work. The rapid spread of the virus has led many states to impose confinement orders and shut down businesses in efforts to lessen the death toll and the burden on struggling health care facilities.

Helplessly watching as his campaign platform based on economic gains slowly withers away, Trump has pushed for life to return to normal. He even proclaimed that everything would be fine by Easter Sunday on April 12. He was sorely mistaken.

When governors across the U.S. spoke out against Trump’s push to restart the economy and his claim during a news conference on April 13 that, "When somebody is the president of the United States, the authority is total," the determined president once again hit Twitter running. To rally – and assumedly rile up – his supporters, he wrote a series of tweets on April 17 reiterating the slogan “LIBERATE MINNESOTA” in support of the planned protest against state-imposed COVID-19 measures and paired it with “LIBERATE MICHIGAN” and then “LIBERATE VIRGINIA – and save your 2nd Amendment. It is under siege!” The three states in need of “liberation” are run by Democratic governors who have, according to Trump and some of the states’ citizens, violated personal liberties with stay-at-home recommendations and the mandatory closing of businesses in an effort to slow the spread of coronavirus.

These tweets hit two controversial nerves: the infringement of liberty and the Second Amendment. The concept of liberty holds a special place in the hearts of patriotic Americans, who associate it with their hard-won freedom from tyrants and foreign entities. The Second Amendment guarantees citizens the right to bear arms – although the interpretations of just exactly how vary widely. Gun control has been an issue debated and thrown around in electoral campaigns for decades, with the electorate committed to one side or the other. In just a few words, Trump hit the right notes to encourage more citizens to rise up in actual revolt against their local governments. Many Americans now feeling the economic crunch the virus has caused want to believe what Trump is trying to hawk. Already frustrated with the lockdowns and the tumbling economy’s effect on jobs, they are vulnerable targets. Some heeded his call, and as a result, more protests against state governments have broken out across the country, with people waving placards with slogans like, “Freedom without Fear,” “Land of the Free” and “Social Distancing = Communism.”

State governors countrywide have spoken out against Trump’s antagonistic tweets. Washington Gov. Jay Inslee, a Democrat, said, “To have an American president encourage people to violate the law ... is dangerous.” Others from the president’s own party also spoke out, with Maryland’s Republican governor, Larry Hogan, in a CNN interview saying, “To encourage people to protest the plan that you just made recommendations on, on Thursday, it just doesn’t make any sense.” He also went on to stress that Trump’s encouragement of protestors who picketed the Statehouse in Annapolis a day earlier was “not helpful.”

Countries worldwide are facing an unprecedented health crisis, and how leaders respond influences how the public deals with the looming biological threat. As the leader of a country, Trump’s use of Twitter over the past four years to spew insults, comfort his fragile ego and issue threats has been disgraceful. Even more concerning is how he uses it to incite – most often negative – action from the public. Most recently, we must ask ourselves how someone who represents the unity of 50 states can encourage its citizens to revolt against local governments, which are the very glue that holds the country’s democratic structure together. At what point does a president stop becoming a leader and start becoming a self-serving, dividing force? The office of the president of the U.S. was founded on the premise of preserving what the country’s Founding Fathers envisioned for a free and flexible yet unified democracy – an establishment that is now being undermined by a persistent flood of petty Oval Office tweets.