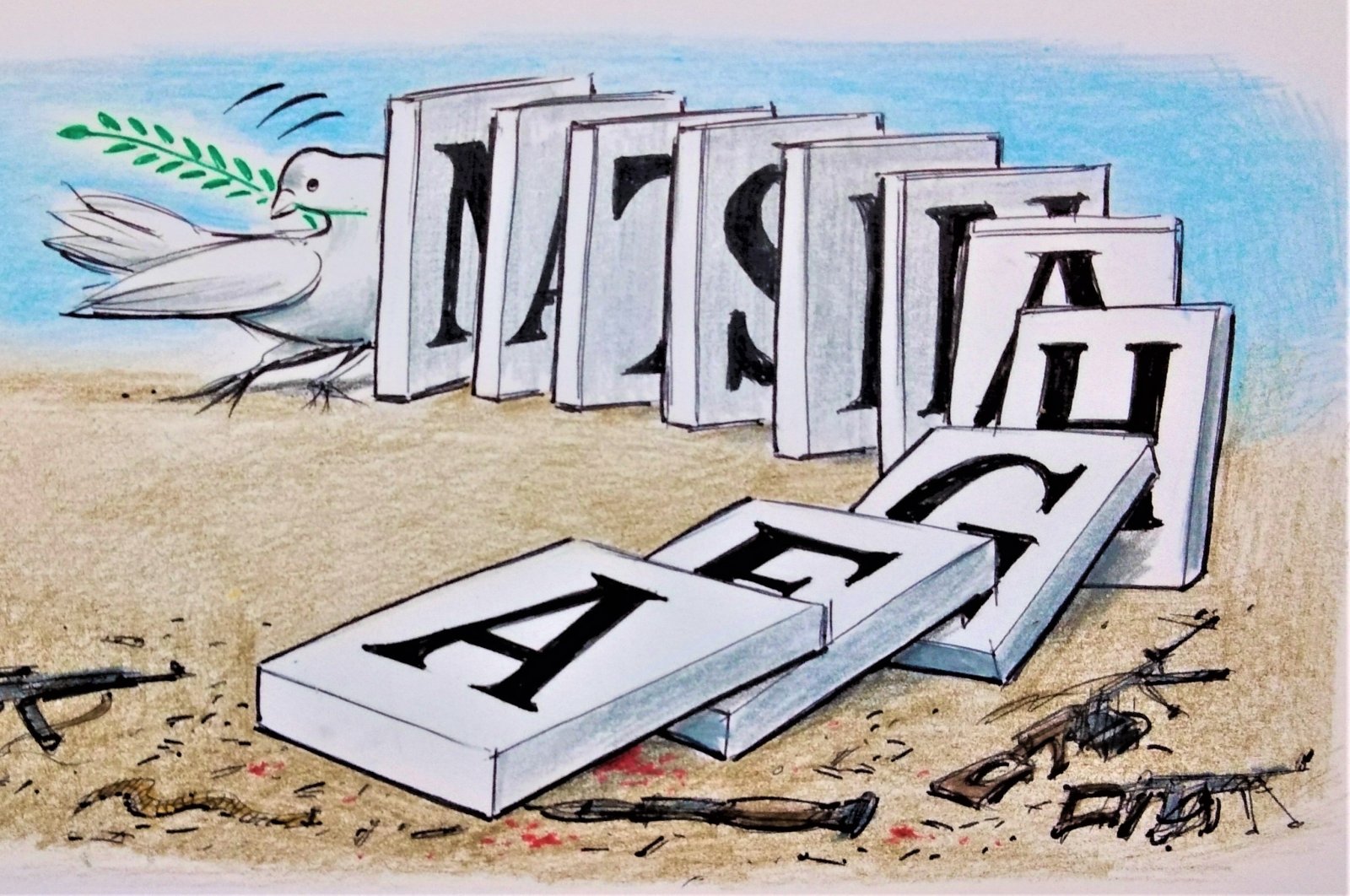 This illustration by Erhan Yalvaç symbolizes Georgia's peace efforts for the Afghanistan turmoil.
by George Janjgava Sep 11, 2021 12:05 am
RECOMMENDED

Over the years, Georgia has actively participated in the NATO-led operations in Afghanistan – the International Security Assistance Force (ISAF) and the Resolute Support Mission (RSM). At the peak of the operation ISAF in 2012-2014, Georgia had up to 1,500 military personnel on the ground. As part of the RSM mission, Georgia had deployed 857 personnel under different allied commands being the largest per-capita contributor to the mission and the single-largest non-NATO provider of manpower. During these missions Georgia’s airspace and its territory was used as a transit route to Afghanistan.

At the final stage of the RSM mission, we supported the withdrawal of the NATO and partner forces from Afghanistan providing the host nation support and full transit opportunities through our territory.

Today, when the tragic events in Afghanistan put us in danger of a large-scale humanitarian crisis, Georgia is once again actively involved in the management of humanitarian and evacuation processes.

Since Aug. 14, three C-17 Globemaster III military transport aircrafts of the Heavy Airlift Wing (HAW), operating as part of the Strategic Airlift Capability (SAC) program, have been deployed to the Tbilisi airport. The aircrafts have been conducting regular flights on the route Tbilisi-Kabul-Tbilisi to evacuate military and civilian personnel from Afghanistan. As of now, up to 20 flights have been conducted from Kabul to Tbilisi and approximately 2,500 people have been evacuated.

Inside Tbilisi International Airport, a special facility was designated by the Georgian side to allocate evacuated personnel before the departure to the NATO member states via charter flights. During the transit operations, the embassies of the member states and Georgian authorities provide evacuees with medical aid, food and other necessities. To ensure the processing of the evacuated refugees, several member states have deployed their military and civilian personnel to the Tbilisi airport.

At the military base, adjacent to Tbilisi International Airport, the Georgian Defense Forces installed large multipurpose tents to host evacuees during the long delays before the departures.

Norway deployed the team of the Norwegian Armed Forces to support the transit operation in Georgia. The team was assigned at the military base of the Georgian Defense Forces, adjacent to the Tbilisi airport. At the same location, Norway installed a Role 1 aid station with a capacity to receive 35 patients and provide them with first aid if necessary.

The Georgian side established an interagency task force, which was responsible for supporting the transit operation with all necessary measures.

“I would like to thank all our international partners, in particular Turkey, who are actively participating in the evacuation of Georgian citizens from Afghanistan,” Zalkaliani said in a written statement.

All 23 Georgian citizens have safely arrived in the country, the vice prime minister and minister of foreign affairs noted.

Since various international organizations and partner states are carrying out urgent humanitarian evacuation of employees and their family members from Afghanistan, Georgia, as a trustworthy member of the international community, has decided to engage in this process.

Accordingly, the Georgian side agreed to assist several international organizations, namely the National Endowment for Democracy (NED), the Open Government Partnership (OGP), the International Republican Institute (IRI), the Asian Development Bank (ADB), the International Monetary Fund (IMF) and the World Bank (WB) in the evacuation of their staff. Evacuees will be provided with the temporary accommodations on the territory of Georgia.

In addition, Georgia’s Prime Minister Irakli Garibashvili underlined that: “Our exceptionally worthy troops took part in the mission in Afghanistan and served very well in Afghanistan, thus defending the image of our country, participating in the international mission and returning home with dignity. Unfortunately, this mission did not pass without losses. Thirty-two heroic soldiers were lost. We, as a responsible partner of the international community, continue to participate in humanitarian missions.”

Garibashvili also noted that “about 2,000 people have already successfully completed transit. The appeal was from the International Republican Institute (IRI), the National Endowment for Democracy (NED) and others. And we have assisted in the temporary relocation of their staff. And this process is very successful. With this, of course, our country has once again shown itself to be a responsible actor and participant in international politics and the international community. In addition, we reaffirm our commitment to the United States, Europe and the international community as a whole.”

The conflict must end

The current developments in Afghanistan threaten regional and global security. Contributing to the international humanitarian efforts in the times of great difficulties once again demonstrates the importance of Georgia as a regional actor, as well as a reliable stakeholder that can ensure the security and stability of the region.

In addition, it strengthens Georgia’s role within the context of regional security and positions the country as a strategic partner for the trans-Atlantic Alliance, promising enhanced cooperation and increased interoperability. Being part of this mission is a giant step on the path toward NATO membership as it proves that Georgia is able to handle matters of collective defense and security in a successful and responsible manner.