Gulf reconciliation: Parties have a long way to go 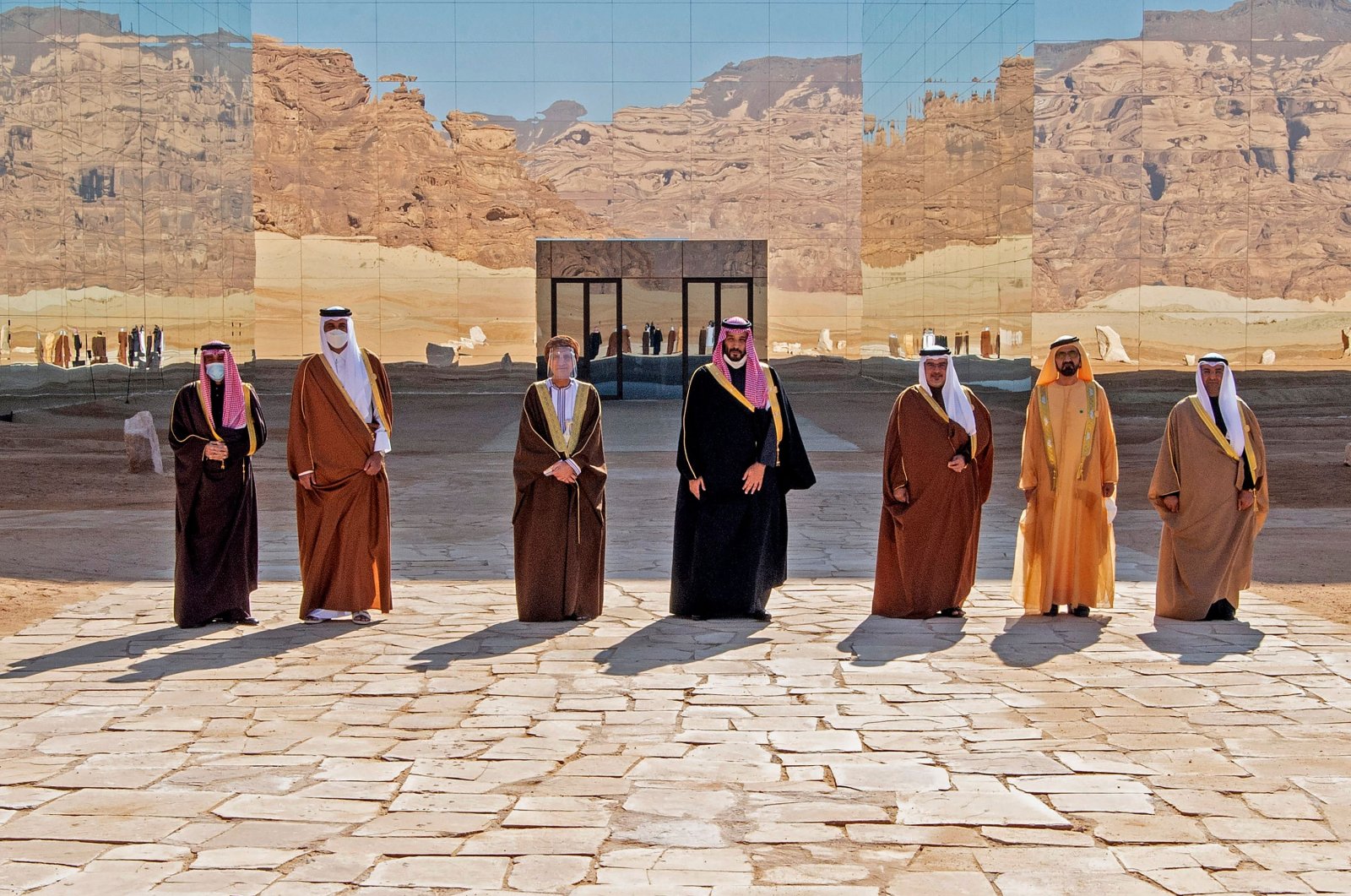 Gulf leaders pose for a picture before the opening session of the 41st Gulf Cooperation Council (GCC) summit that ended the rift between Qatar and the Saudi-led bloc, Al-Ula, Saudi Arabia, Jan. 5, 2021. (AFP Photo)
by Najla M. Shahwan Jan 09, 2021 12:05 am
RECOMMENDED

Qatar was subjected to a boycott and blockade from the summer of 2017 onward as a result of accusations by the “Arab Quartet” countries, namely Saudi Arabia, Egypt, the United Arab Emirates (UAE) and Bahrain, of supporting terrorism and the organization of the Muslim Brotherhood.

Additionally, claims centered around Qatar’s Al-Jazeera network and friendly foreign policies toward Turkey and Iran were in full alignment with the realization of the “monarchical unity” goal featured in the GCC’s founding charter in 1981.

From Qatar’s standpoint, this was no less than a diktat by other states seeking to subordinate its foreign policy to their own.

Since then, relations of all kinds have been severed and attempts have been made to isolate the country – an attempt to bring about a shift in Doha's foreign policy, which had progressively brought it closer to Turkey and Iran.

At the GCC summit, Saudi Arabia and its three Arab partner states agreed to restore full diplomatic and trade ties with Doha and signed accords ending the feud that had divided the Middle East for more than three years, according to the government of Kuwait, which has been mediating the dispute.

In a statement carried by the Kuwait News Agency on Dec. 4, Kuwait's Emir Sheikh Nawaf Al Ahmad Al Sabah expressed his appreciation for the ongoing and constructive efforts being deployed to end the Gulf crisis. He added that, “All parties affirmed their keenness to achieve Gulf and Arab solidarity and stability and reach a final agreement on permanent solidarity between their countries in a bid to serve the interest of these countries’ people.”

U.S. President Donald Trump supported the diplomatic and economic blockade imposed on Qatar and was one of the first Western leaders to adopt the Arab Quartet’s narrative fueling the crisis with Qatar and the justifications for the blockade they imposed.

However, his administration also pushed for this reconciliation, and since the beginning of December, U.S. Secretary of State Mike Pompeo had said he was “very hopeful” there would be a resolution, but he didn’t confirm any date.

Jared Kushner, Trump’s son-in-law and chief adviser for Middle Eastern affairs, also shuttled back and forth to the region, visiting Saudi Arabia and Qatar and meeting with both countries’ leaders as part of this push.

The Trump administration was working to achieve reconciliation between Qatar and other Arab states in the Gulf, as U.S. officials were keen for stability within the GCC that would allow for a more united front against Iran. The Trump administration was also seeking to secure an additional foreign policy accomplishment before leaving the White House in the coming weeks.

In 2017, the Arab Quartet issued a list of demands, which included that Doha end its alleged support for the Muslim Brotherhood, close Al-Jazeera, downgrade diplomatic ties with Iran and shut down a Turkish military base in Qatar.

Doha refused to abide by the demands from the time they were first issued, and none of them were implemented.

The blockade for the past several years tore apart the traditionally close alliance of Gulf Arab states and ripped apart societal ties by separating families who had intermarried with Qataris. Additionally, Qatar's only land border had been closed almost constantly since mid-2017 and opened briefly only to allow Qataris into Saudi Arabia to perform the Islamic hajj pilgrimage.

Gas-rich Qatar also took an economic hit from the blockade and its national airline was forced to take longer and more costly routes.

Citing a person with knowledge of the agreement, reports said that Saudi Arabia and its allies dropped the list of 13 demands. Qatar then agreed to freeze a litany of lawsuits against the blockading states, said the source, who spoke on the condition of anonymity.

Will this reconciliation provide unity and stability in the region and address all the issues at hand amicably through dialogue?

Will there be any change on the ground, and what will be the impact of this reconciliation on Qatar’s relations with Turkey and Iran?

The answers to these questions remain unclear; however, according to some analysts, the resolution of the diplomatic crisis may indicate changes in the regional balance of power that will necessarily affect ties among Qatar, Turkey and Iran.

They argue that this reconciliation will reduce Qatari dependence on Iran on several levels, including ending Doha’s reliance on overflying Iranian airspace, while others say that Qatar's ties with Turkey and Iran might be lessened but will not end.

When the blockade was announced on Qatar, both Turkey and Iran rushed to Doha's aid with food and medical supplies that had been in short supply in the first days of the embargo.

Turkey expressed support by sending military forces to Doha, and economic relations with the two countries have strengthened significantly since 2017.

For its part, Saudi Arabia, through reconciliation with Qatar, was seeking to build warm ties with the administration of U.S. President-elect Joe Biden, who is set to take office later this month and is expected to take a firmer stance toward the kingdom over its human rights record and its bloody war in Yemen.

Although the Gulf reconciliation is a progressive step, especially in warming relations between Qatar and Saudi Arabia, there is still a long road ahead, and navigating it will likely be a challenging process amid all the conflicting interests, deep divisions and mistrust among the GCC countries, which could remain an enduring feature of complex, wider regional politics.