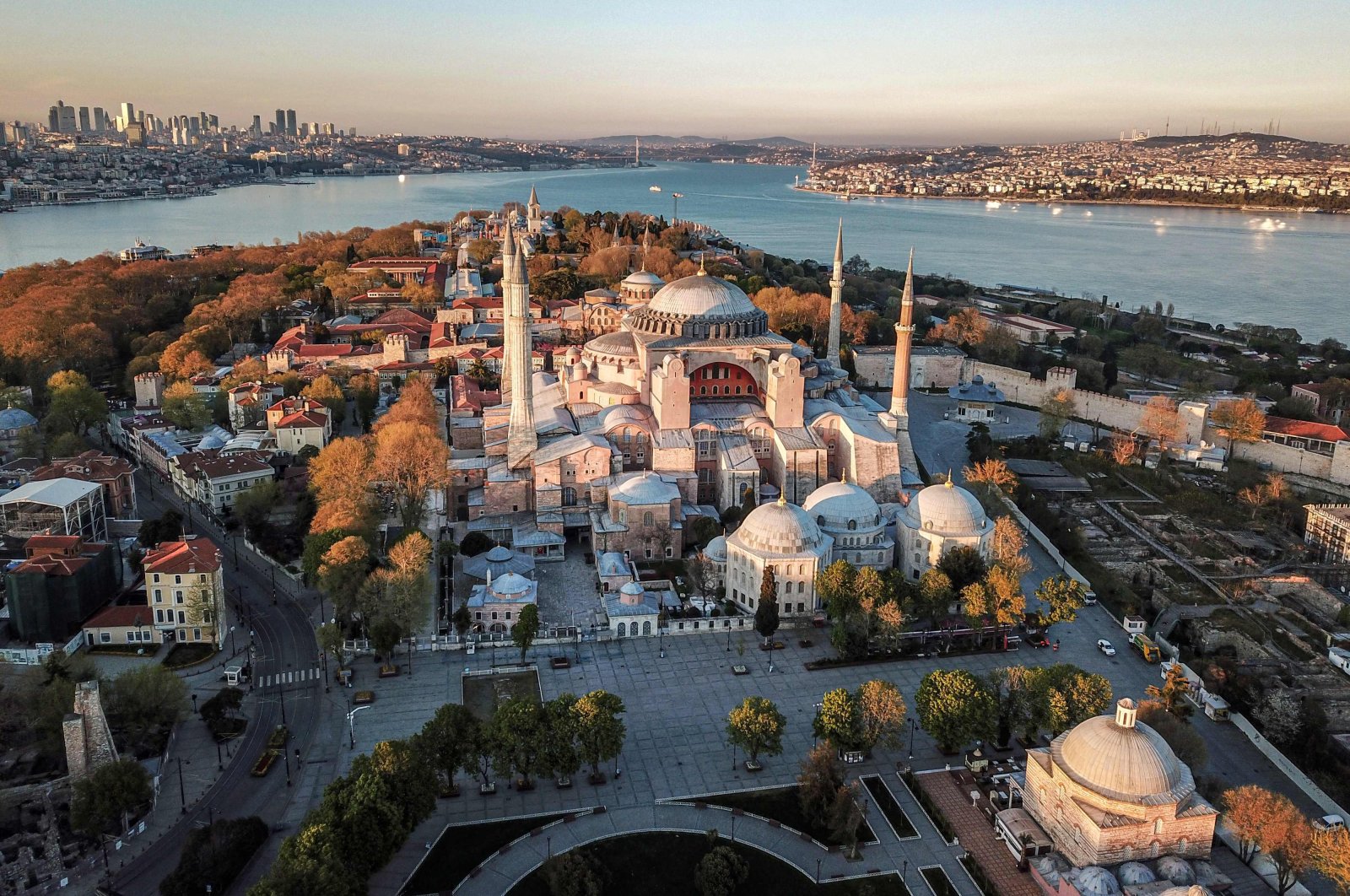 Hagia Sophia was originally built as a church during Byzantine times. In 1453, upon the conquest of what was formerly known as Constantinople by Sultan Mehmed the Conquerer, the church was transformed into a mosque.

It has seen many restorations and repairs in the time since. Two prominent Ottoman figures, architect Mimar Sinan and calligrapher Kazasker Mustafa Izzet, performed remarkable works on the site which, after it was turned into a museum, was quickly added to the UNESCO List of World Heritage Sites.

However, there have been claims that this status could be revoked by UNESCO following its reversion to a mosque – so, as President Recep Tayyip Erdoğan declared, it is necessary to remind people that Hagia Sophia is open to all of humanity.

The reversion of Hagia Sophia has drawn both praise and criticism throughout the world. There are leaders and organizations in the Muslim world that have made their delight known in regard to the decision, yet others think that the reversion will be a factor that could further sour relations between Turkey and its Western allies.

However, in most cases, the West is already very biased and discriminatory toward Turkey. Therefore, even though there is nothing to criticize here, the West is proficient in finding points of contention with Ankara regardless.

Many have described the change in the status of the Hagia Sophia as a new turning point, and it seems as though the decision will continue to be a source of discussion both in Turkey and beyond.

With the reopening of the building as a mosque, Turkey has dispersed many black clouds from an Islamic perspective. On the other hand, according to some, the change may have repercussions in foreign nations that have Islamic and Ottoman architectural heritage in the form of mosques. Regardless, it should be known that this is an unforgettable moment for most Muslims around the world.

But how will this impact social issues that pertain to the public's will? The opening as a mosque could very well signal that constitutional affairs are not untouchable when it comes to amending specific laws. Millions of people celebrated the transformation of the site from a museum into a mosque across the globe. There were even thousands of Turkish people who attended the Friday prayers on July 24 at Hagia Sophia Grand Mosque for the first time in nearly 100 years.

What I have seen so far is that if Turkey insists on doing something in its national interest, the will exists to carry it out. Therefore, I completely believe that now is the time to make any required changes to the rules and laws that have disappointed Turkish society in the past.

I sincerely hope that Turkey will advance the modification of certain laws to suit Turkish and Islamic customs and traditions. In this respect, laws regarding theft, rape, murder, treason, molestation and sexual abuse may be adjusted to satisfy the moral stance of our nation.

For example, “Qisas” in Islam is an Arabic term interpreted to mean "retaliation in kind," and punishments pertaining to this doctrine may be deemed just as part of our judicial system. In Turkish society, we have moral, national and Islamic beliefs that teach us values such as honesty, virtue, civility and benevolence.

Our sensitive media outlets have greatly publicized the unfortunate murders of hundreds of women and children in the last couple of years. Therefore, it pays to examine the law regarding those issues.

Since 2016, over 1,500 women such as Emine Bulut and Pınar Gültekin have been murdered. The latest case this month occurred when Pınar Gültekin, a student, was killed by a man in the Aegean city of Muğla. Even President Erdoğan publicly shared his thoughts on Gültekin’s murder, stating that the Republic of Turkey would take essential steps to prevent violence against women. In addition, he said he would be following up on the case of Gültekin personally.

Treason is an unacceptable crime in most nations and traitors should be judged in line with additional laws that pertain to both traditional and Islamic norms. Rules should provide a deterrent to anyone considering breaching national or traditional values.

The reality of our constitution was once expressed by Uğur Mumcu, a prominent journalist who was assassinated in a bombing in 1993. He stated that the “Turkish citizen is one married in accordance with Swiss civil law, punished under Italian criminal codes, prosecuted by German criminal courts, administered by French administrative law and buried under Islamic law."

I believe hopefully and sincerely that Turkey will introduce harsher laws in regard to the above. As Mumcu explained two decades ago, there have been times when Turkey transferred laws and regulations from other nations. Thus, Turkey should update and revise some of these laws and regulations in light of current public expectations.

Furthermore, I think that the Turkish public as a whole will be in favor of those required changes for growing mindful, careful individuals who obey the rules and respect others.